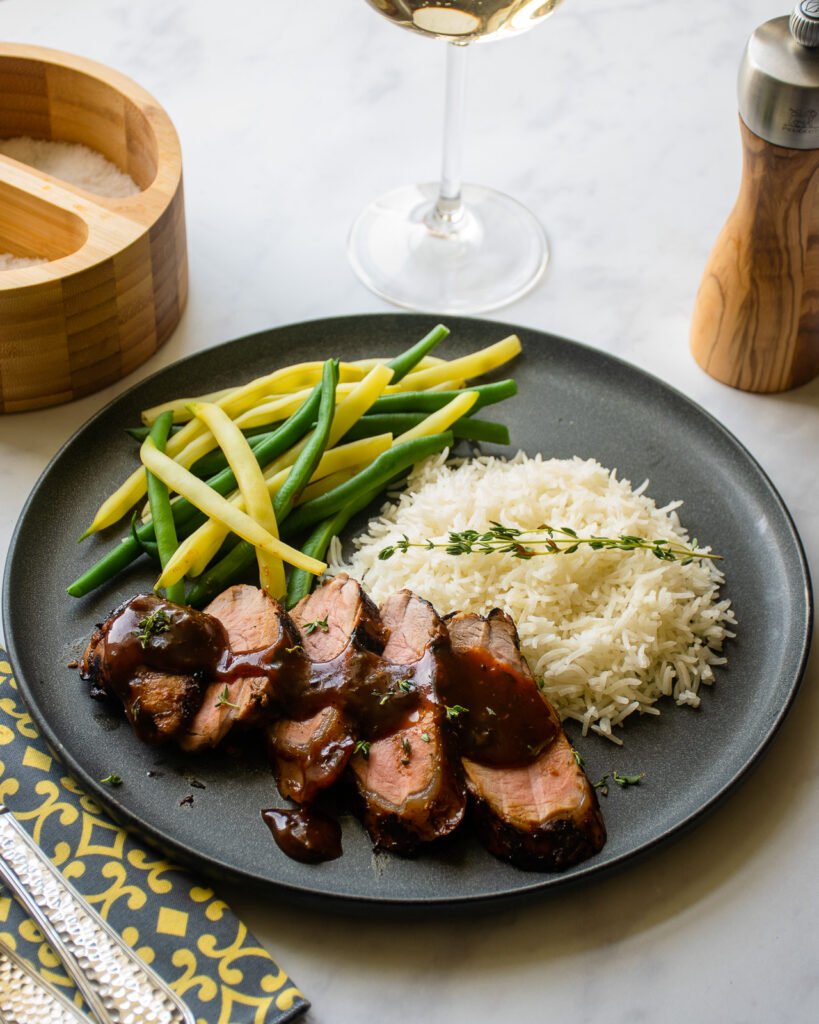 Grilled BBQ Pork Tenderloin is a very easy dinner to prepare. Whether you dress it up on a dinner plate, or dress it down into a casual, but delicious sandwich, there are few cuts of pork easier to cook than pork tenderloin. Most of the time, we slice pork tenderloin into medallions to sauté on the stovetop or roast it whole in the oven, but this recipe takes it out onto the grill, giving it some attractive markings and caramelizing the sugars in the marinade. That makes it easy AND delicious. 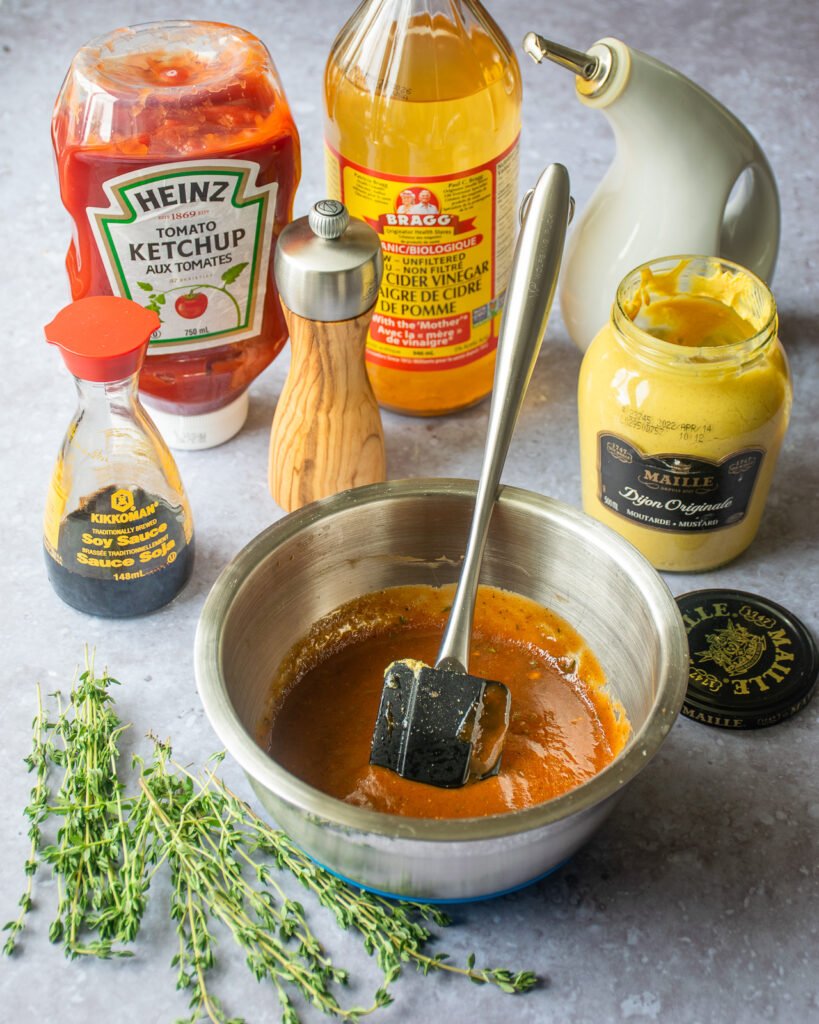 The marinade for the pork tenderloin is very easy. Simply stir together all the ingredients you’d find in your favorite BBQ sauce – ketchup, mustard and cider vinegar, stir in some fresh thyme and olive oil, and season it with soy sauce and freshly ground black pepper. The sugar that is always a component of BBQ sauce comes later. 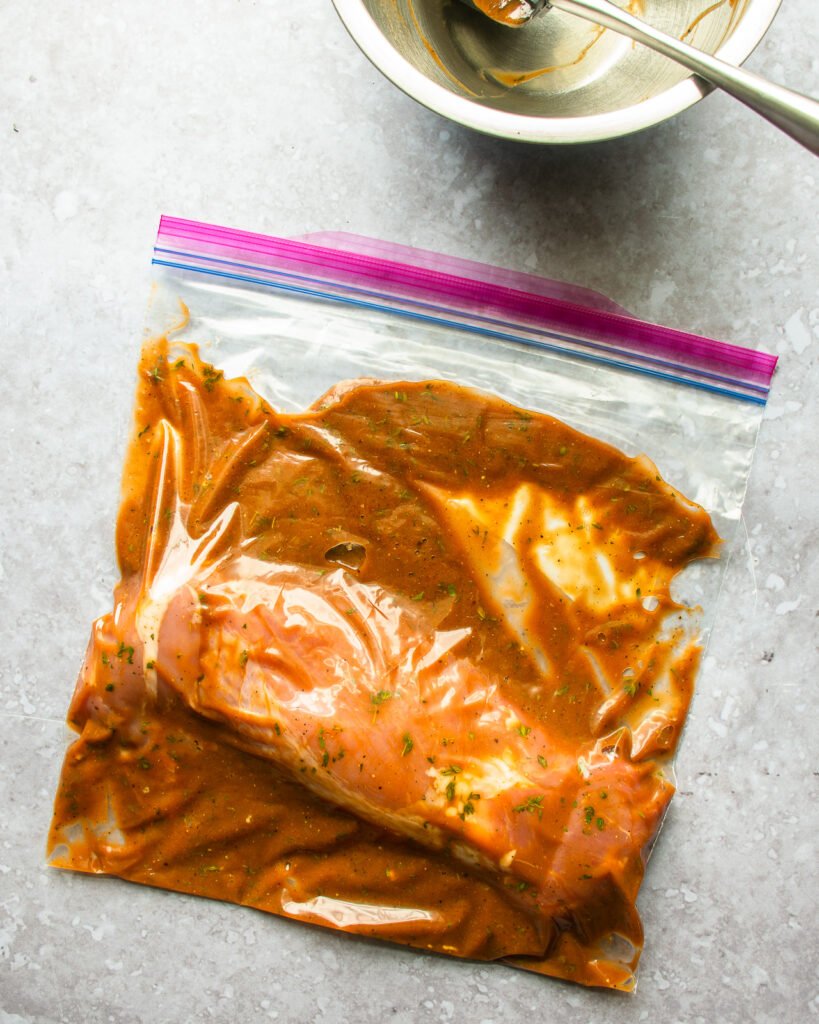 The pork will take some time to absorb the flavors of the marinade, so plan on at least 4 hours or let the pork sit in the refrigerator overnight if you want to. I like to use a zipper sealable plastic bag because I can squish all the air out of the bag and really surround the pork with the marinade, massaging the flavors into the tenderloin before letting it rest in the fridge. 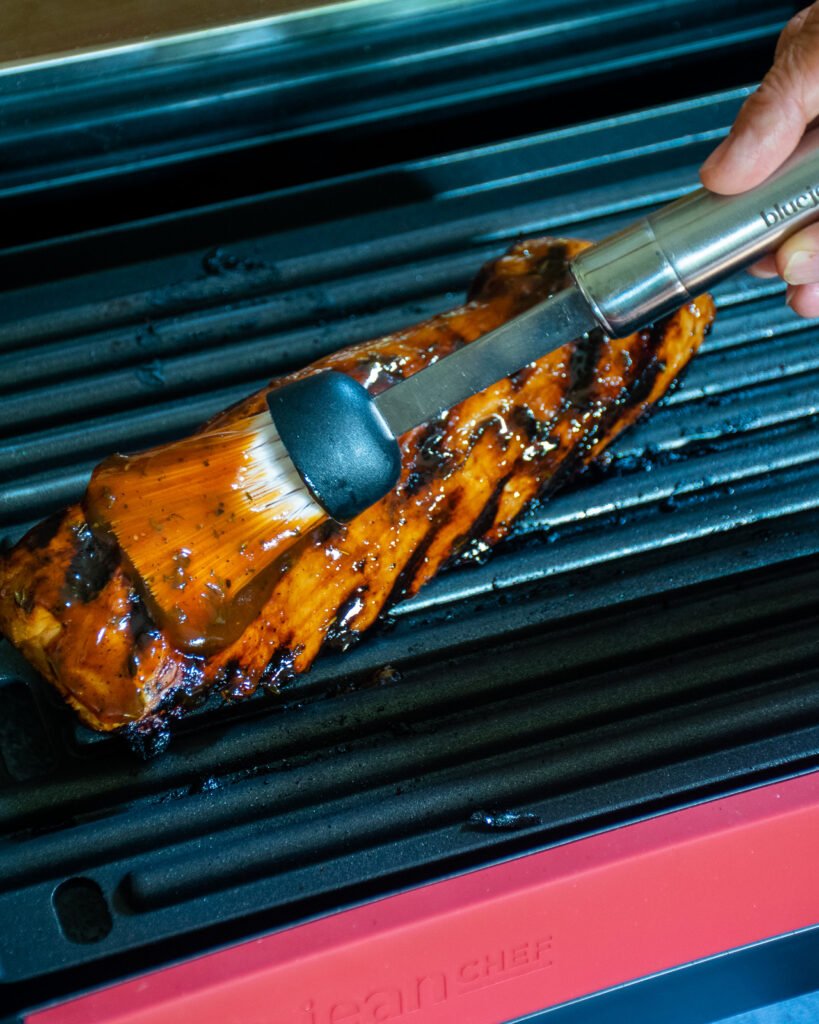 How Long to Grill Pork Tenderloin 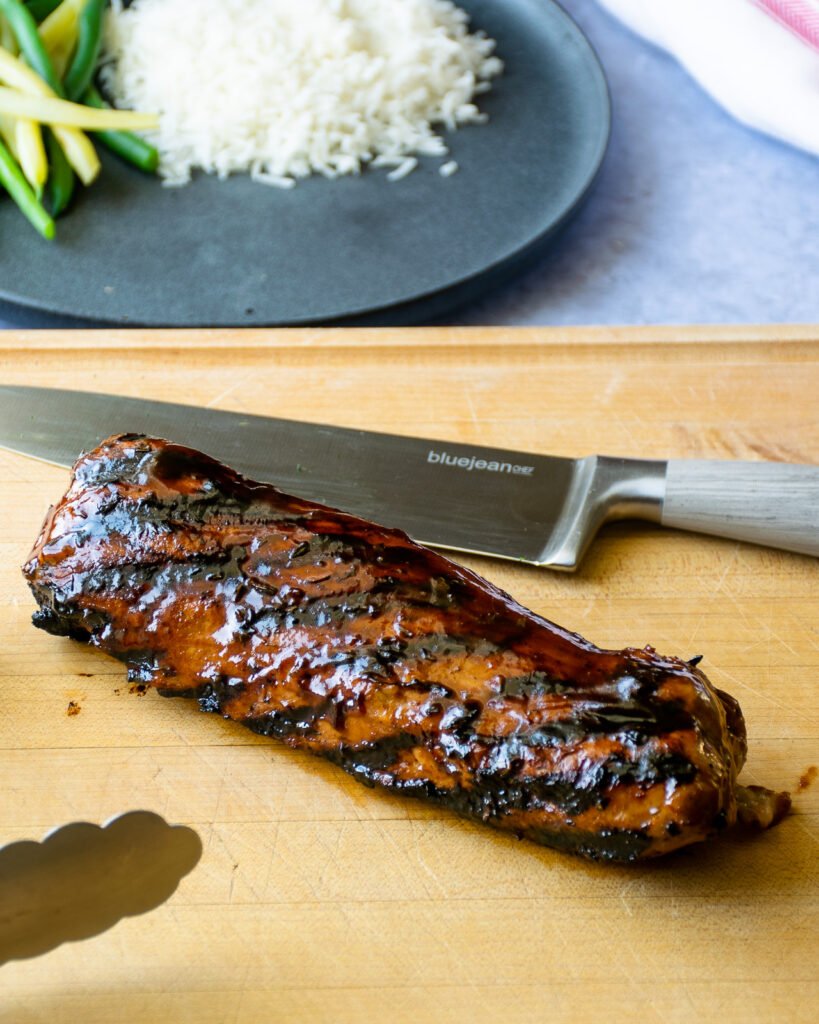 Once you’ve reached 145˚F, resting that tenderloin is important. By letting the meat rest, the temperature will continue to increase (usually by 10˚F) and the moisture inside the meat will have a chance to settle and redistribute itself. Because the meat relaxes as it rests (don’t we all!), when you go to slice the meat, you’ll find fewer juices escaping onto your cutting board than you would without resting the meat.  You’ve worked so hard to preserve by not over-cooking the pork, so let the meat rest. Period. 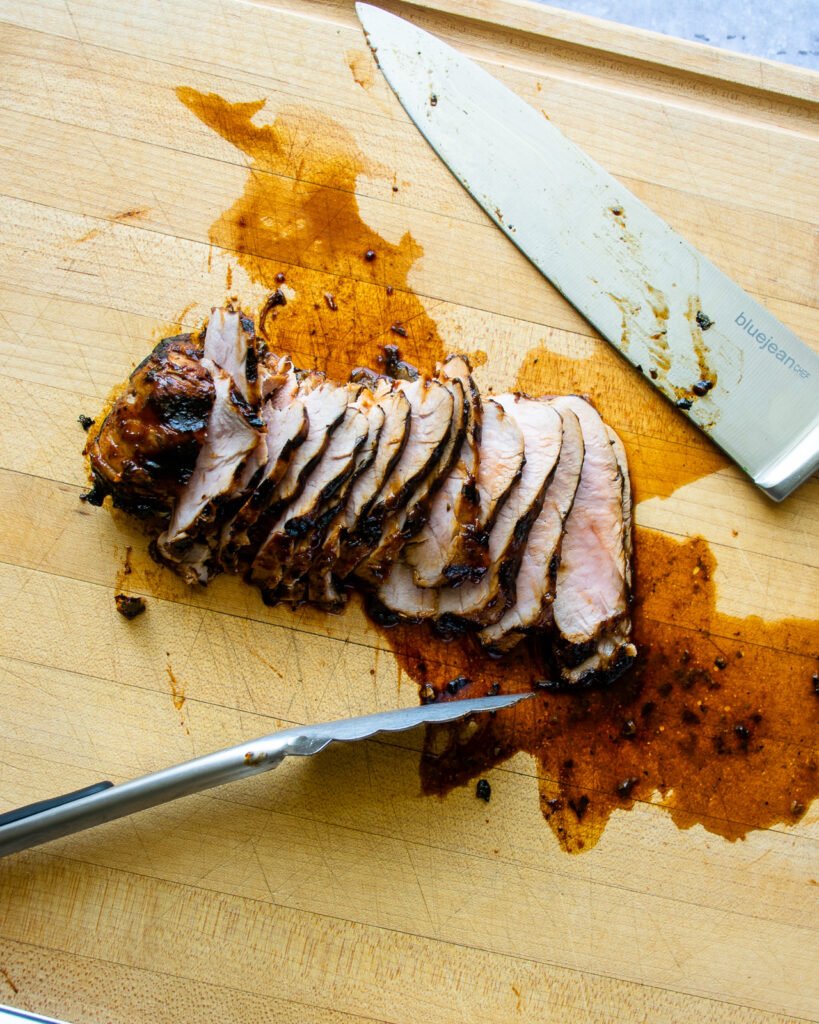 When you’ve cooked the pork properly to 145˚F AND you’ve let the meat rest for at least 5 minutes, you’ll find a slight pink color at the very center, but the meat will be opaque rather than translucent. That is perfectly cooked pork. All you have left to do is slice it. I prefer thick slices if I’m serving the pork on a dinner plate with sauce drizzled over the top. If I’m making a sandwich, however, make thinner slices. 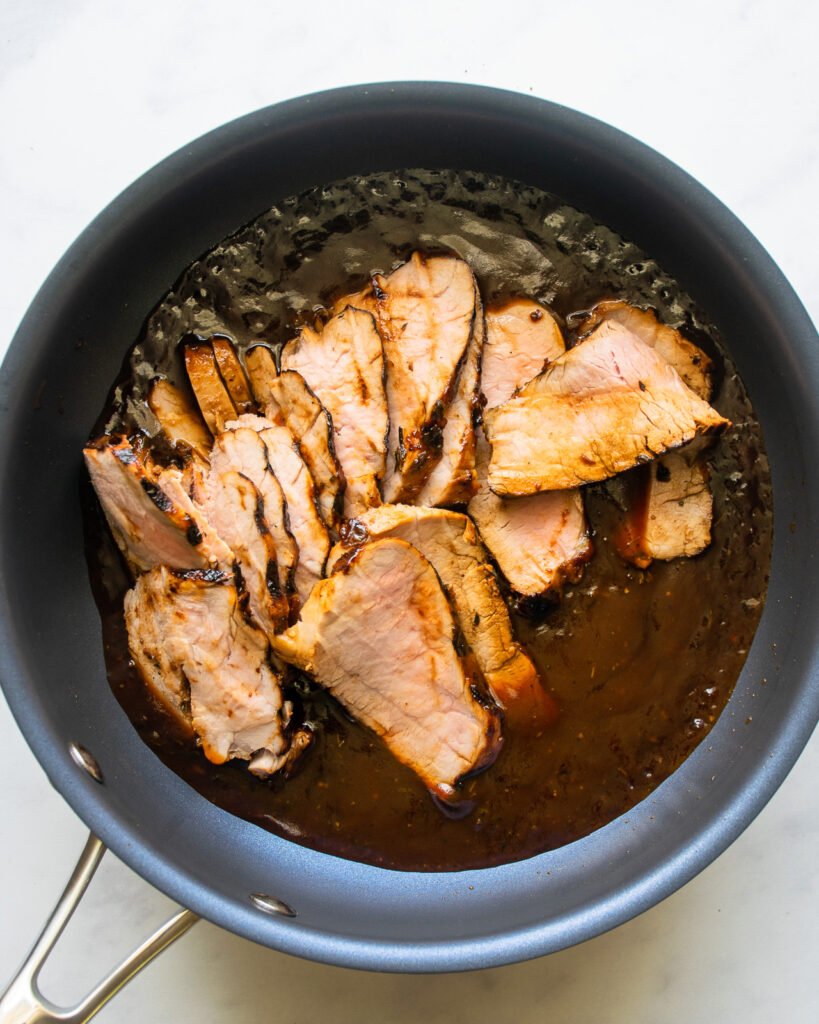 The sauce for the grilled BBQ pork tenderloin is made from the marinade. Once you’ve removed the pork from the marinade, add the brown sugar and bring the mixture to a boil, letting it simmer for several minutes while the pork cooks so that it reduces into a thick glaze. You can brush that glaze onto the pork as it grills or you can add the sliced pork to the sauce (as in the photo above) if you’re making a BBQ pork sandwich. 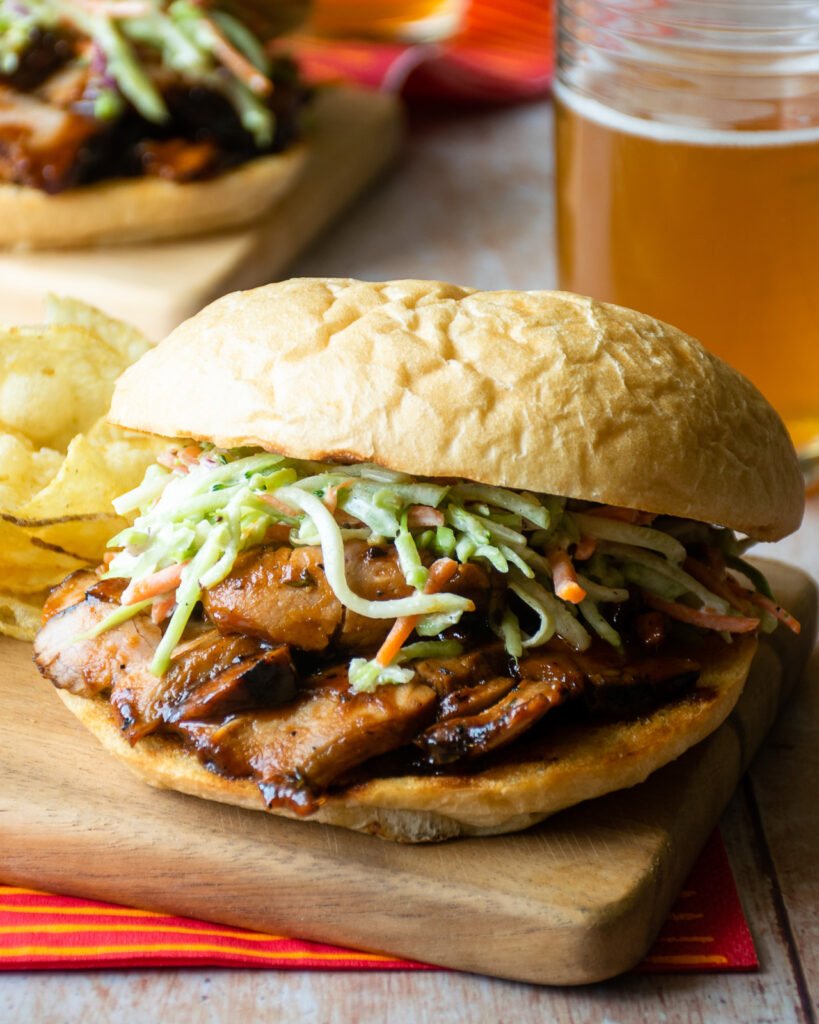 This grilled BBQ pork tenderloin turns into a pretty spectacular sandwich and takes a fraction of the time a braised pulled pork butt takes. The meat is tender and moist and the sauce sweetens and lubricates the dish perfectly, getting absorbed by the bread as it drips down the side. Add a little coleslaw on top for some cool crunch and you’ve got a winner on your hands!

Hello! All photos and content are copyright protected. Please do not use our photos without prior written permission. If you’ve made this recipe and would like to share it with your friends, please link back to Grilled BBQ Pork Tenderloin on Blue Jean Chef. Thank you!