You do need to plan ahead to make these Honey BBQ Grilled Pork Chops since they need time to brine, but it's so worth it! The grilled chops stay moist and are then slathered with honey BBQ sauce on the grill and at the table. 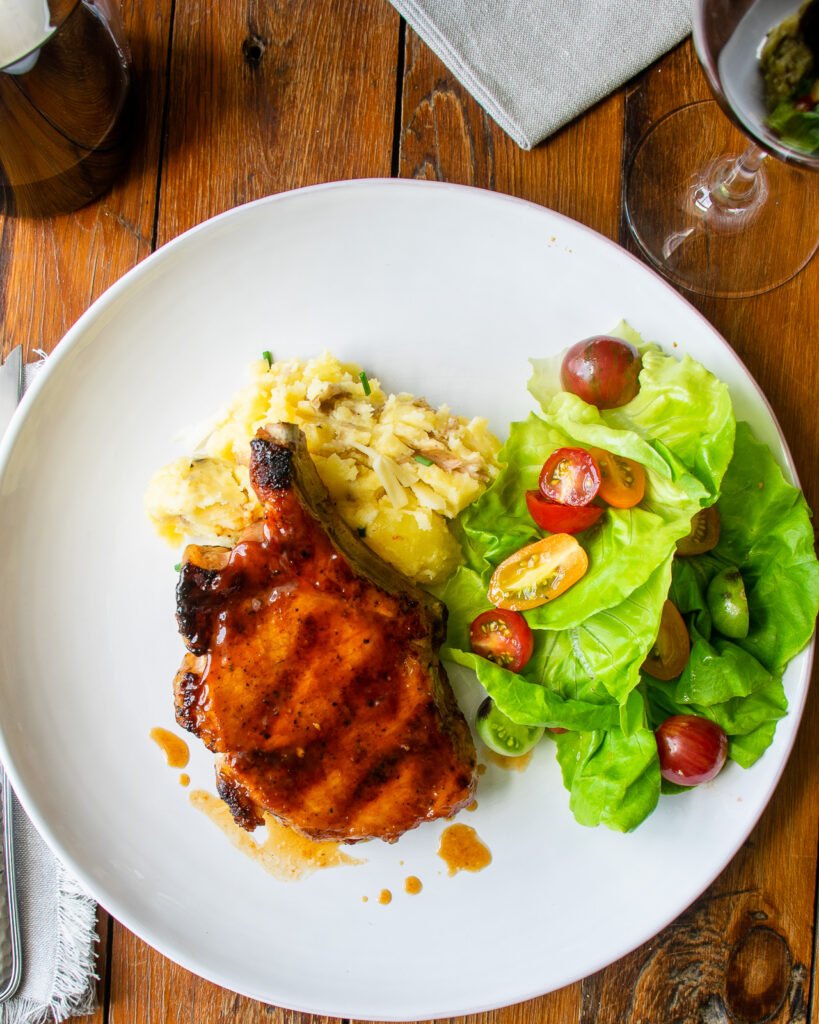 I’ve heard the complaints before – pork chops are dry. Well, I’m here to tell you it doesn’t have to be that way and these Honey BBQ Grilled Pork Chops are here to prove it. The key is simple, but it does take a little advanced planning. Taking the time to brine the pork chops with a dry spice rub not only keeps the chops moist when you cook them, but also seasons them perfectly at the same time. So, plan this meal with at least 8 hours of notice to brine the chops and you won’t be disappointed. 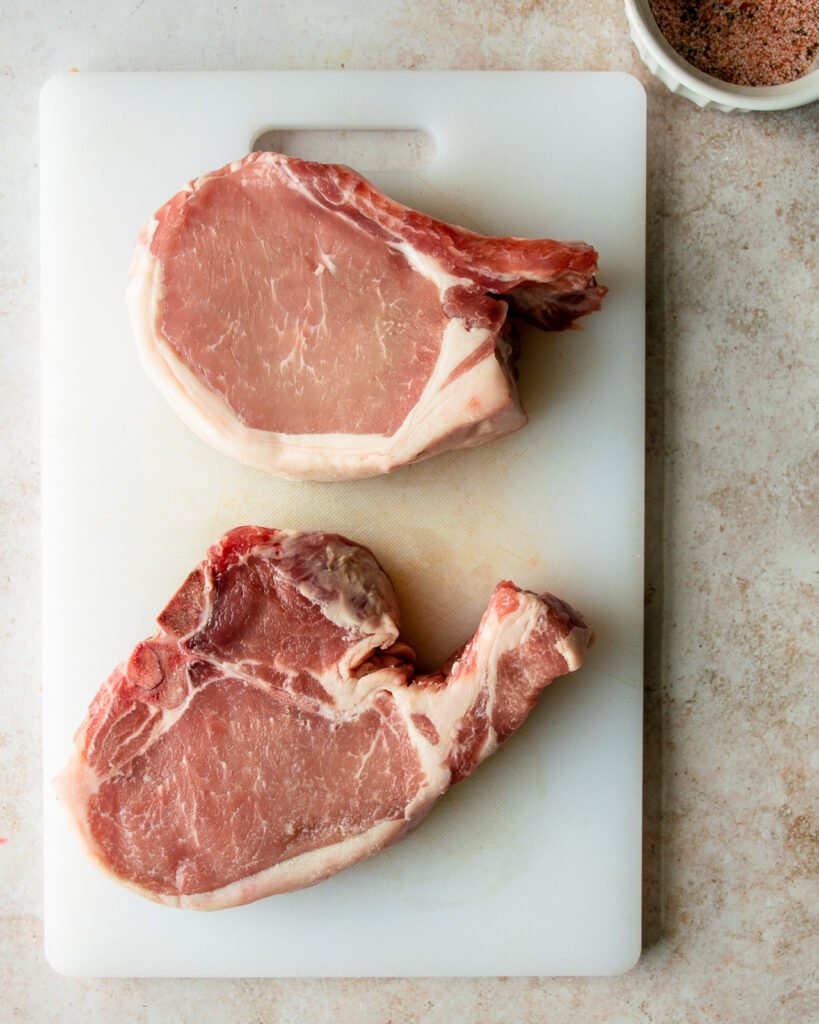 When buying pork chops for grilling, the first thing I look for is a bone. Bone-in chops are more flavorful than boneless chops and tend to hold their shape better as they cook, with less shrinkage.

The second thing is to choose the cut of chop. My favorite chop for grilling is a rib chop (the top chop in the photo above). It has a bone with a portion of the pork loin attached and has a relatively high fat content. Don’t let a high fat content dissuade you – you don’t have to eat the fat on the chop, but it will help prevent the chop from drying out as you cook. The other chop that will work is a center cut or loin chop (the bottom chop in the photo above). This chop has a portion of the loin on one side of the bone and a smaller portion of the tenderloin on the other side. Unfortunately, the two sections of meat on either side of the bone cook at different speeds, so it can be a challenge to get the chop cooked just right. I find it also has less flavor and is less tender than the more expensive rib chop, but it still works well in this recipe.

The last thing I look for is the thickness of the chop. Ideally the chops should be 1- to 1½-inches thick. In summary: a 1-inch thick, bone-in rib chop is my number one. 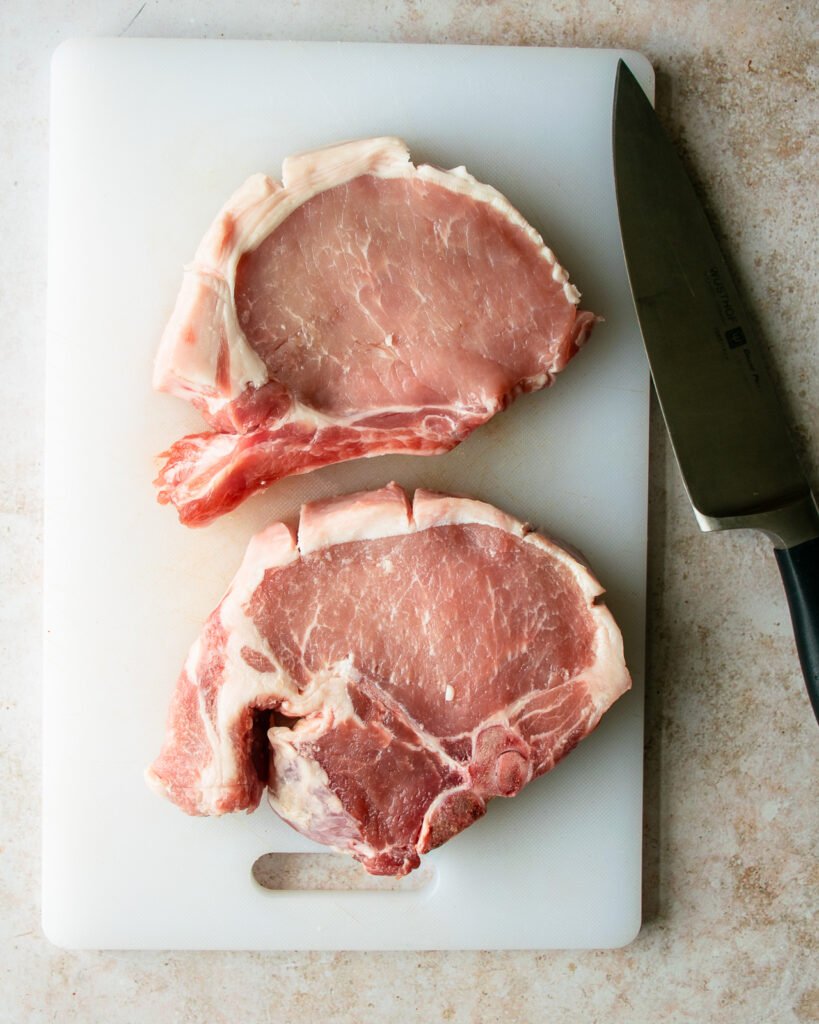 How to Keep Pork Chops Flat

The most frustrating part of cooking pork chops is that they curl up as they cook which prevents them from cooking evenly, whether you’re cooking them in a pan, under the broiler or on the grill. The reason they curl is that the fat around the chop shrinks as it is heated. So, to avoid the curl up, score the fat around the chop, making slices every inch or so through the fat, just down to the meat. This allows the fat to shrink without pulling tightly around the chop. Problem solved!

Once you have selected your chops and scored the fat, it’s time to brine the chops. You can read more about brining and why you should always brine pork chops here, but basically it’s the dry brine process in this recipe, along with buying the right chop that keeps the chops moist. Brined pork chops are harder to over-cook, plus brining seasons the pork perfectly too. It’s not difficult – the spice rub only has four ingredients – but it does take at least 8 hours for the brine to have any effect on the chops. Season the meat with the spice rub and place the chops on a rack over a pan in the refrigerator, uncovered. This allows the chops to dry a little while they brine, rather than sitting in their own juices. 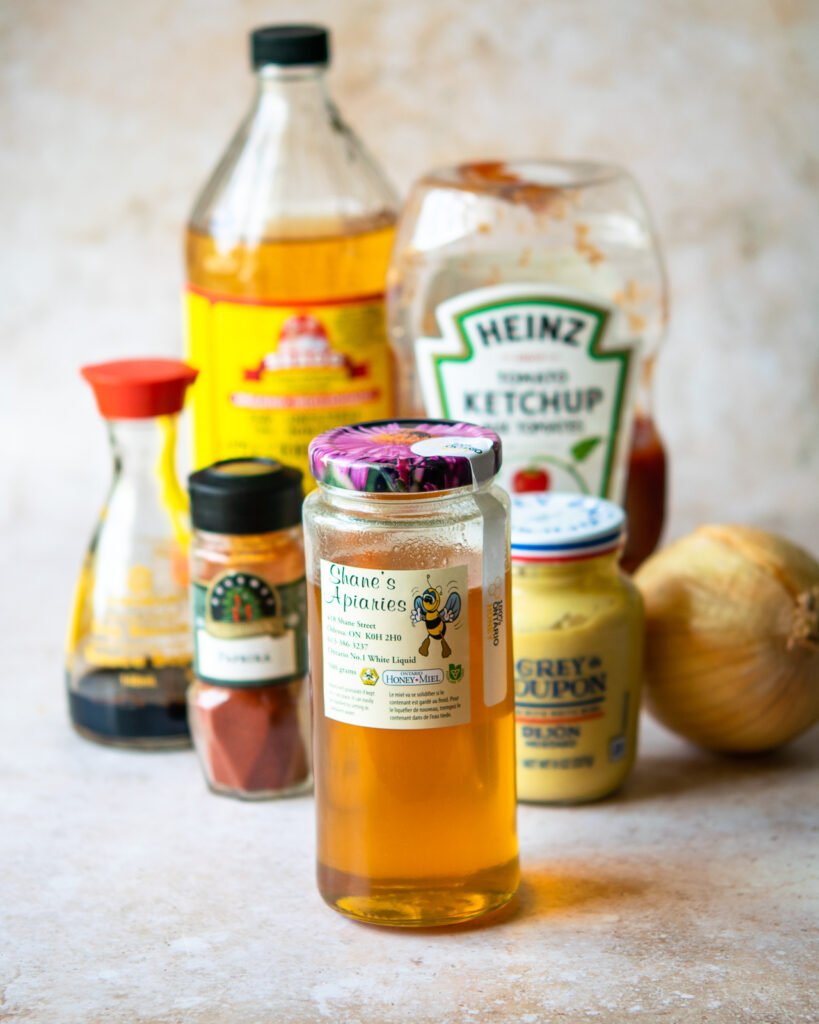 This recipe makes a lot of honey BBQ sauce. You’ll baste it on the chops generously as they cook, but you will have sauce leftover, which would be great on other meats you might be grilling, like chicken breasts or salmon fillets. You can also save the leftovers for another occasion. The key ingredient is the honey, of course, which not only tastes great, but if you can get your hands on some raw local honey, offers health benefits too. 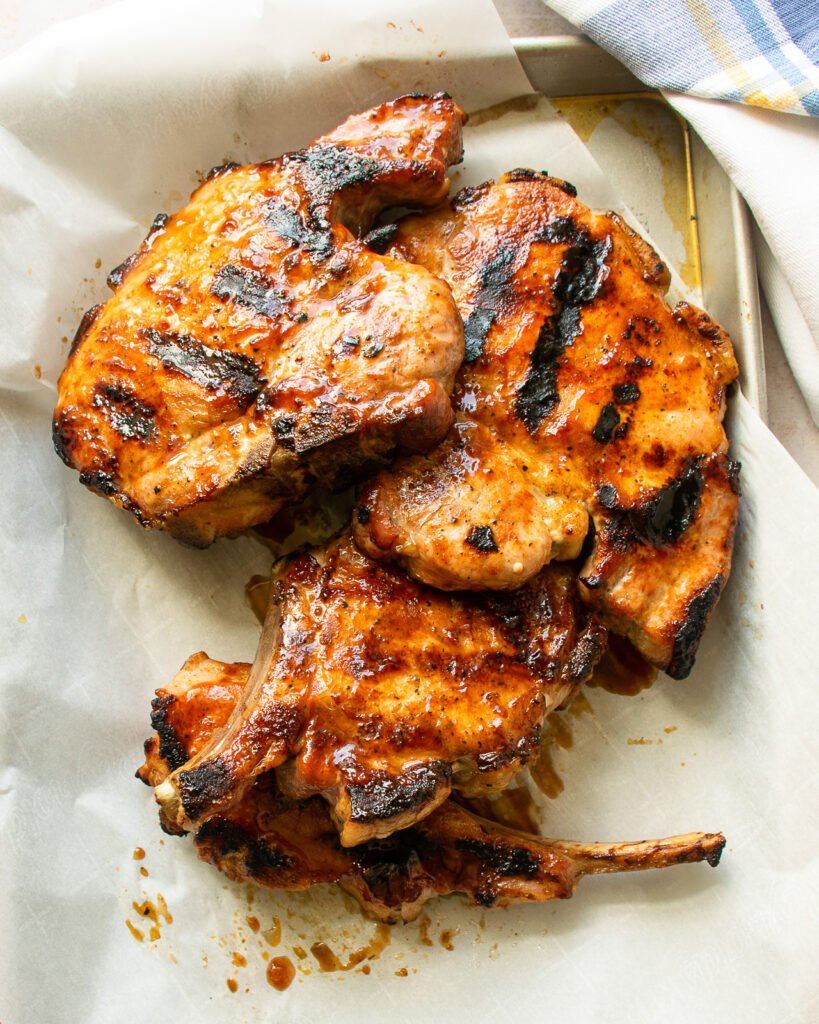 How to Grill Pork Chops

The key to grilling pork chops successfully is to create two zones on your BBQ. Start by searing both sides of the chops in the high heat zone of your grill. Don’t move them around while they sear. There may be smoke from the grill as the fat on the chops starts to render, but don’t move the chops for 3 minutes per side. They’ll be fine and need some time to sear and get good grill marks. Once the chops are seared, move them to the more medium heat zone in your grill and start to baste with the BBQ sauce. They will need to cook for another 3 to 4 minutes per side, depending on how thick your chops are.

How Long to Grill Pork Chops

I can’t answer this definitively because there are too many variables – how thick are your chops, how hot is your grill, how often do you lift the lid up to stare at your food as it cooks…. This list goes on. To know if your chops have cooked through, press on the chops as they cook. When they are raw, they will feel soft. As they cook, the meat will become firm. The very best way to know if the chops are cooked, however, is to test with an instant read thermometer. The pork should reach an internal temperature of 150ºF. Then, with 5 minutes of resting time, they will be cooked to perfection. 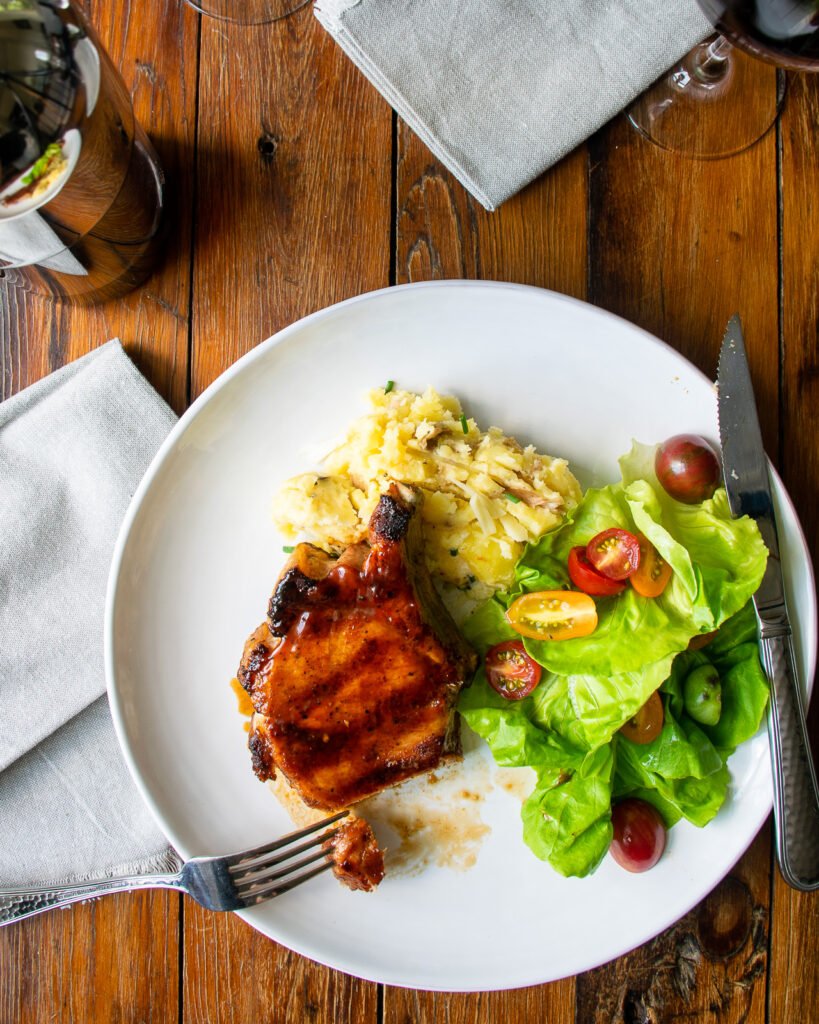 What to Serve with this Recipe

You have so many options of what to serve with these delicious pork chops. If you want to keep everything on the grill, try some grilled corn on the cob or a grilled panzanella salad. If you’re up for turning on the stove, you can never go wrong with mashed potatoes and cheddar garlic smashed potatoes are perfect on the stove OR in your pressure cooker. For a green vegetable, try some grilled asparagus, some blanched broccoli or a light green salad.

Hello! All photos and content are copyright protected. Please do not use our photos without prior written permission. If you’ve made this recipe and would like to share it with your friends, please link back to Honey BBQ Grilled Pork Chops on Blue Jean Chef. Thank you!