Looking for the perfect baked potato? Look no further. Rubbing the skin with olive oil, seasoning with salt and pepper and baking in an air fryer gives you a potato with crispy delicious skin and a fluffy interior just waiting for all your toppings. 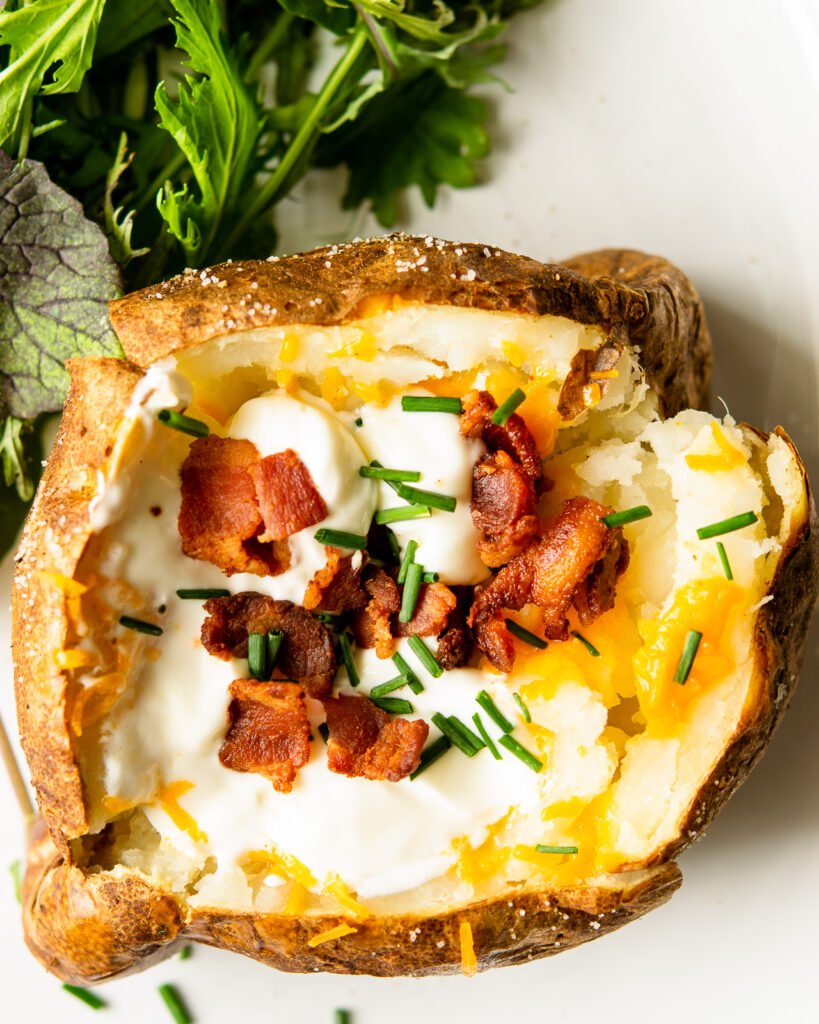 It is quite possible that we could divide the world into two groups: those who eat the skin of a baked potato and those who don’t. Such division in the world is not productive, but I have a plan that might help. If everyone in the world could try an air fryer baked potato, we could unite the people and all come together as baked potato skin eaters! Why? Well, because when you bake a potato in the air fryer, the skin becomes crispy and delicious. With baked potatoes like that, we could all enjoy the skin and reap the benefits from the added nutrients in potato skin, instead of tossing the skins into the garbage or compost bin. Are you with me? 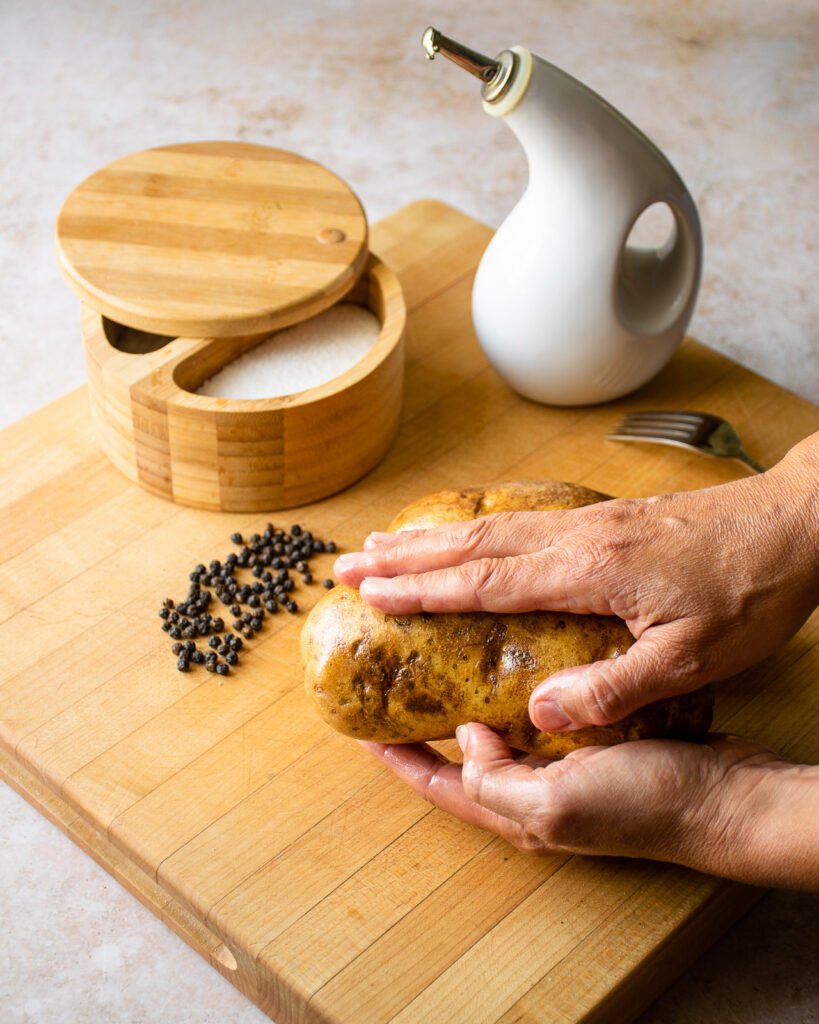 The best baked potatoes are fluffy inside with light airy potato inside that absorbs the butter, cheese or sour cream that you add on top. In order to get that fluffy interior, you want to start with a high-starch potato like an Idaho or russet potato. These are the potatoes that are best for baking. Starting with the right potato is 90% of the success of this recipe. 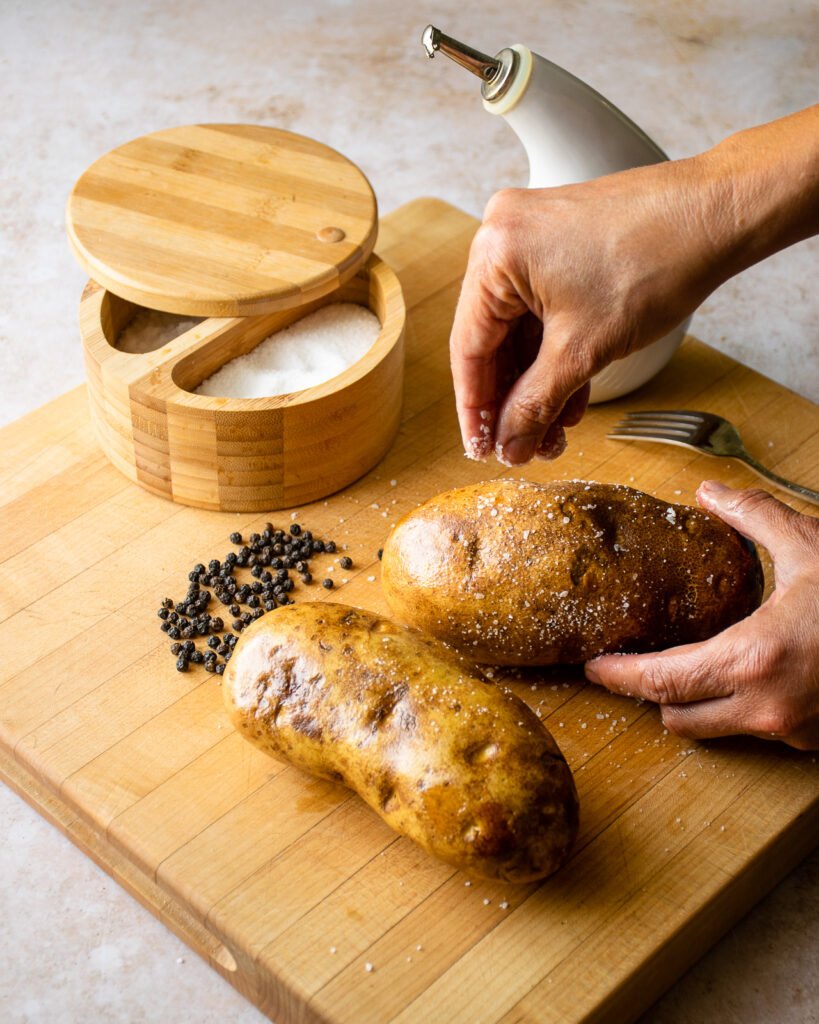 Tips for the Best Baked Potato

Because our goal is to enjoy not only the potato, but the potato skin as well, start by washing the potato really well. Then, rub the exterior with olive oil, which is what helps crisp the skin. Not many people season their potato, but again, we’re going for delicious potato skin so season the outside of the potato well with salt and freshly ground black pepper. Finally, prick the skin with a fork, creating several holes in the surface. This gives the steam inside the potato an exit route so that the potato doesn’t just burst open. 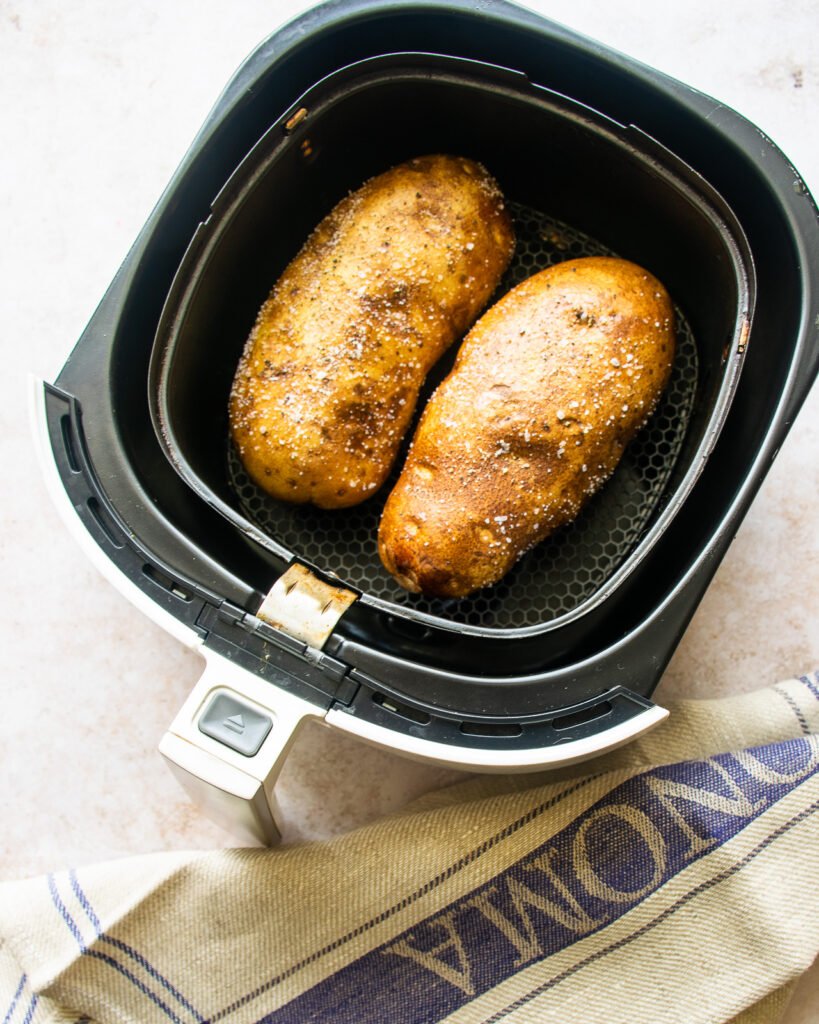 How long to bake a potato really depends on the size of the potato, but an average sized potato takes about an hour in the oven at 400ºF. In the air fryer, you can cut this time down to about 40 to 45 minutes because of the force of the fan blowing that hot air around. If you are baking extra large potatoes, just add more time in 5 minute increments until a paring knife pierces the potato easily. 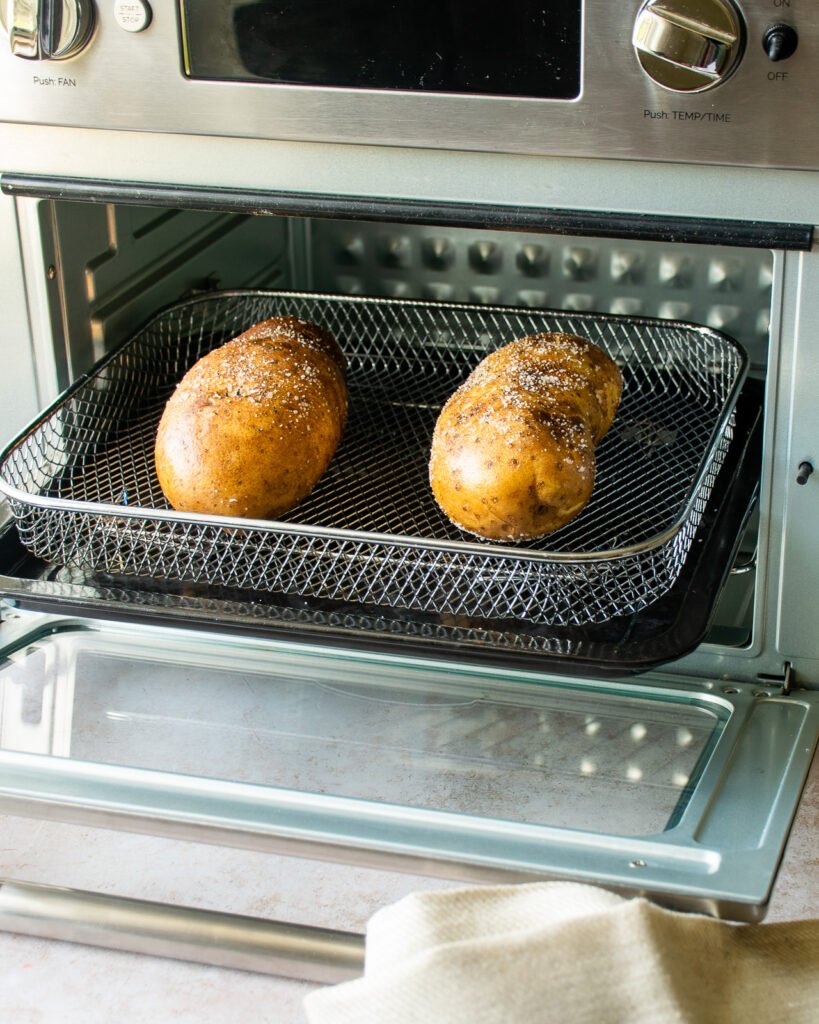 There’s no need to wrap the potatoes in foil as they bake. Foil adds a layer to the potatoes and traps the steam that is being released. As a result, instead of being baked, the potatoes get steamed. The skin of a steamed potato is nowhere near as delicious as that of an olive-oil rubbed baked potato. So, no foil. 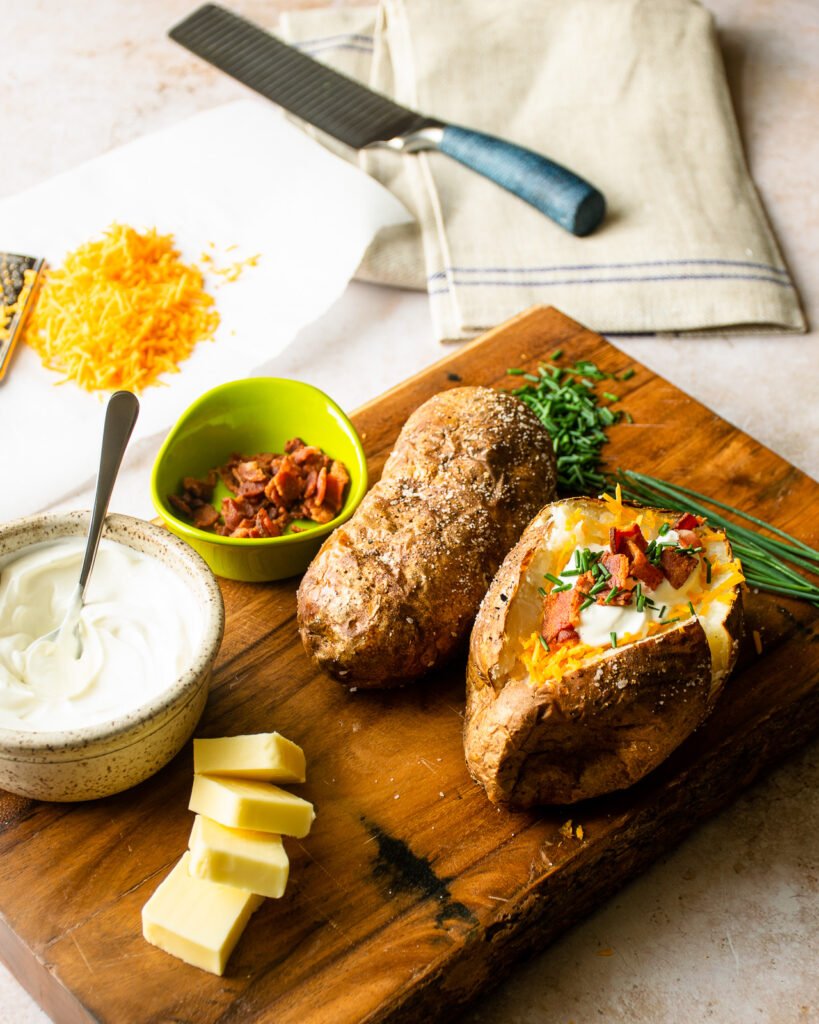 What you use to top your air fryer baked potato is entirely up to you. The classic toppings are butter, sour cream, Cheddar cheese, bacon bits and scallions or chives, but there’s no reason to stop there (unless you want to). You could bake potatoes and make a meal out of them by filling them with a spoonful or two of chili or beef stew. You could also vary the toppings and theme your baked potatoes. Make a Greek style baked potato with feta cheese, red onion and olives, or an Italian pizza baked potato with marinara sauce, pepperoni and mozzarella. The world is your baked potato!

Hello! All photos and content are copyright protected. Please do not use our photos without prior written permission. If you’ve made this recipe and would like to share it with your friends, please link back to Air Fryer Salt & Pepper Baked Potatoes on Blue Jean Chef. Thank you!