A twice baked potato is twice as good. When you add Boursin cheese to the mix, well that just takes it over the top! These Boursin twice baked stuffed potatoes do take a little time, but it's worth it!

This recipe for Boursin twice baked stuffed potatoes is not complicated, but it does require a little planning because it needs time. A baked potato made in the oven, after all, takes about an hour for the potato to bake through properly. Twice baking adds another half an hour, but if you’re putting that time into dinner, why not make it super special and stuff that potato with delicious fillings like Boursin cheese? Let me answer that for you… there’s no good reason not to stuff a baked potato and bake it again! 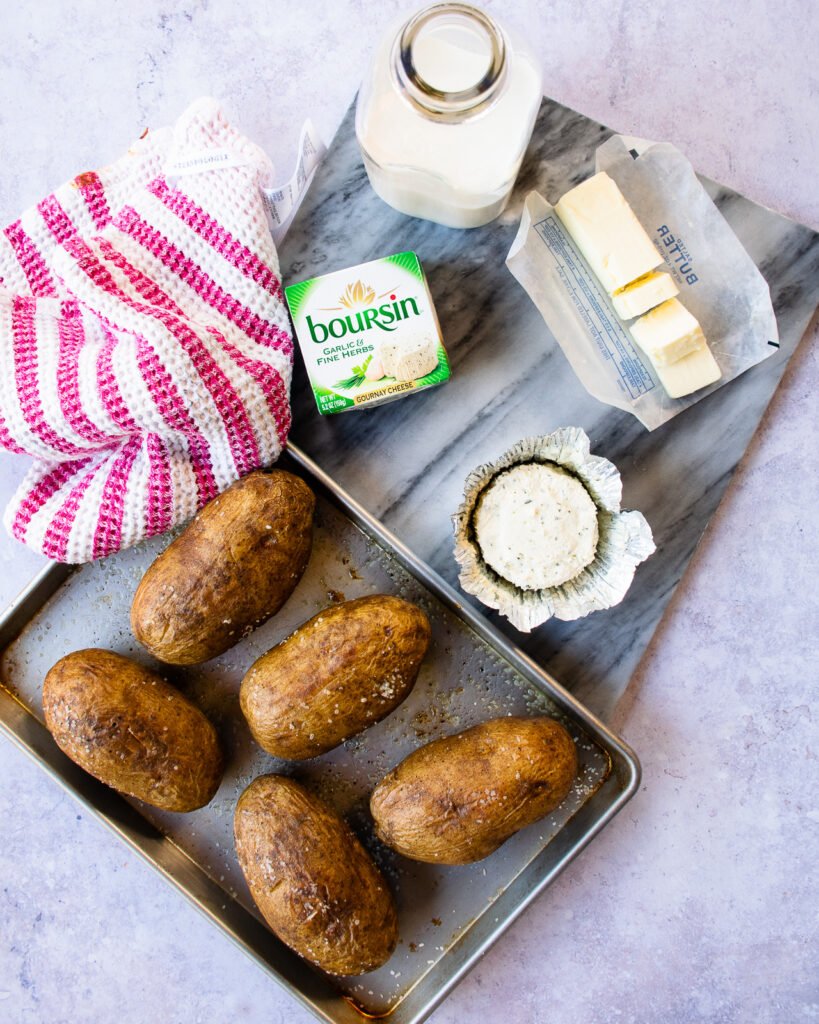 One of the keys to making really impressive stuffed potatoes is to make sure you have enough potato filling. Having enough filling lets you to pile the potato high out of the shell. So, start by baking one extra potato. That extra potato will get peeled and added to the filling for the remaining potatoes. You’ll probably have a little filling left over, but I promise you it won’t go to waste. Shape it into a patty and fry it up with breakfast tomorrow and you’ll thank me!

Boursin cheese is what makes these stuffed potatoes so very delicious. Boursin is a creamy, French, cow’s milk cheese that was first brought to market in the 1950s by a gentleman called François Boursin. It’s one of the most popular cheeses on a cheese board, delicious spread on crackers or dolloped on top of a warm steak, so of course it is delicious mixed into potato too. 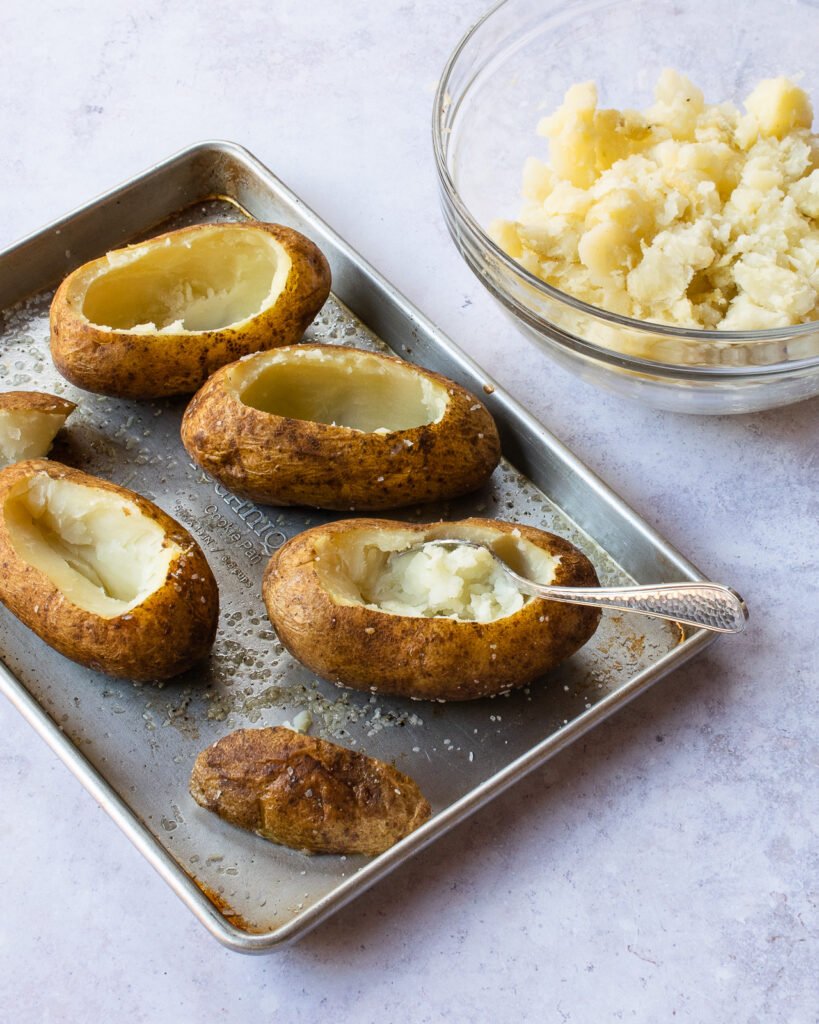 In addition to the Boursin, the filling has butter, half-and-half (or cream if you’re a devil) and an egg. The egg gives the filling a little lift, letting it rise out of the shell. Remember to season the filling well with salt and pepper and taste it before you put it into the potato shell. 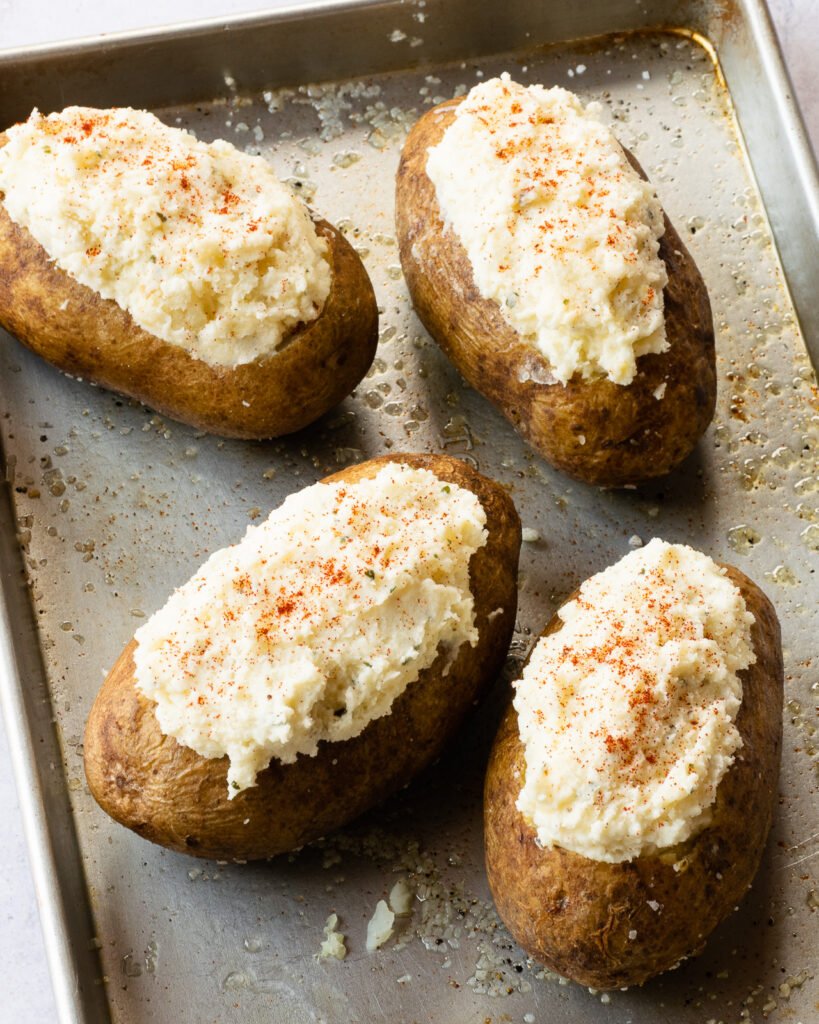 Then, stuff the filling back in (piling it high because you were smart enough to make plenty of filling) and sprinkle a little paprika on top. At this point, the potatoes can wait at room temperature to be baked again so you can time them to come out of the oven with the rest of the meal you’re making. 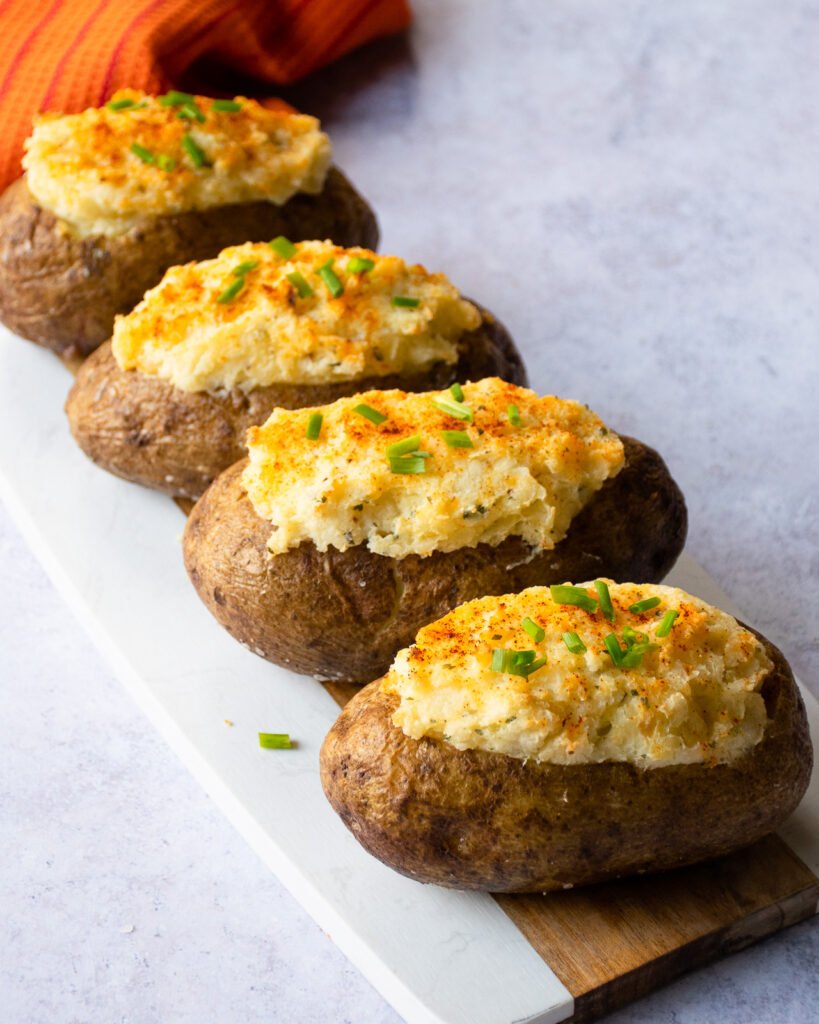 When they do come out of the oven, they are as pretty as can be and just a sprinkling of chives on top is all the garnish you need. You can serve these with sour cream or not, as you see fit. They make a perfect side dish to so many meals, but perhaps especially with a beautiful roast beef.

Hello! All photos and content are copyright protected. Please do not use our photos without prior written permission. If you’ve made this recipe and would like to share it with your friends, please link back to Boursin Twice Baked Stuffed Potatoes on Blue Jean Chef. Thank you!