Guinness Beef Stew is a hearty rich stew using dark Guinness stout in the braising liquid giving it a rich and earthy flavor. This traditional Irish Stew is the perfect comfort food for a cold night. Slow simmered in a Dutch oven, the flavors in this stew come together wonderfully. Make sure you have some nice warm crusty bread to dip into the gravy!

One of the best meals I had on a recent trip to Ireland wasn’t in one of the fancy restaurants that I spent hours researching on the Internet before the trip. No, it was in a local pub where we sat at a communal table with strangers (who soon became friends) and listened to local musicians playing in the corner. Both dishes we ordered shone that night. The first was a Guinness stew and it inspired me to come home with hopes of replicating the meal. (The other – because I know you are wondering – was the traditional Irish Cabbage and Bacon, and yes, I want to replicate that too if I can!)

Aside from the Guinness, the beef is the most significant ingredient in this stew. If you pick up “stewing beef” from the grocery store, you may likely be disappointed. Often with “stewing beef” you don’t know what cut of beef has been used. Sometimes, in fact, it can look like just scraps of beef from many other cuts. Badly cut stew cubes can leave you with a stew that looks odd and the pieces can be tough because you don’t know what cut you’re dealing with. The biggest piece of advice I can give you when making a stew at home is to buy a chuck roast and cut it into cubes yourself. That way, you can trim as much or as little of the fat off as you please, you can make the cubes big enough so that when they shrink during the cooking process they don’t look too small, and you know that you are working with chuck. It’s not hard to cut a big piece of chuck into cubes. Do it.

One of the most important steps in making a beef stew is the first – the browning of the beef. This really does have an affect on the finished dish and you can’t rush it, so plan for this step to take up to 30 minutes. I know you’ll be tempted to over-crowd the pan when you brown the beef so that you can get as much done as quickly as possible, but I promise you this will only slow you down. When you over-crowd a pot, the moisture that comes out of the meat has no hot empty surface area on the bottom of the pan from which to evaporate. As a result, the moisture just accumulates and stops the meat from browning, and browning the meat gives flavor not only to the beef, but to the sauce that you’re going to make as well. So, don’t over-crowd the pan. Start browning the beef, open the Guinness, pour it into a glass and go get another can from the fridge for this recipe. 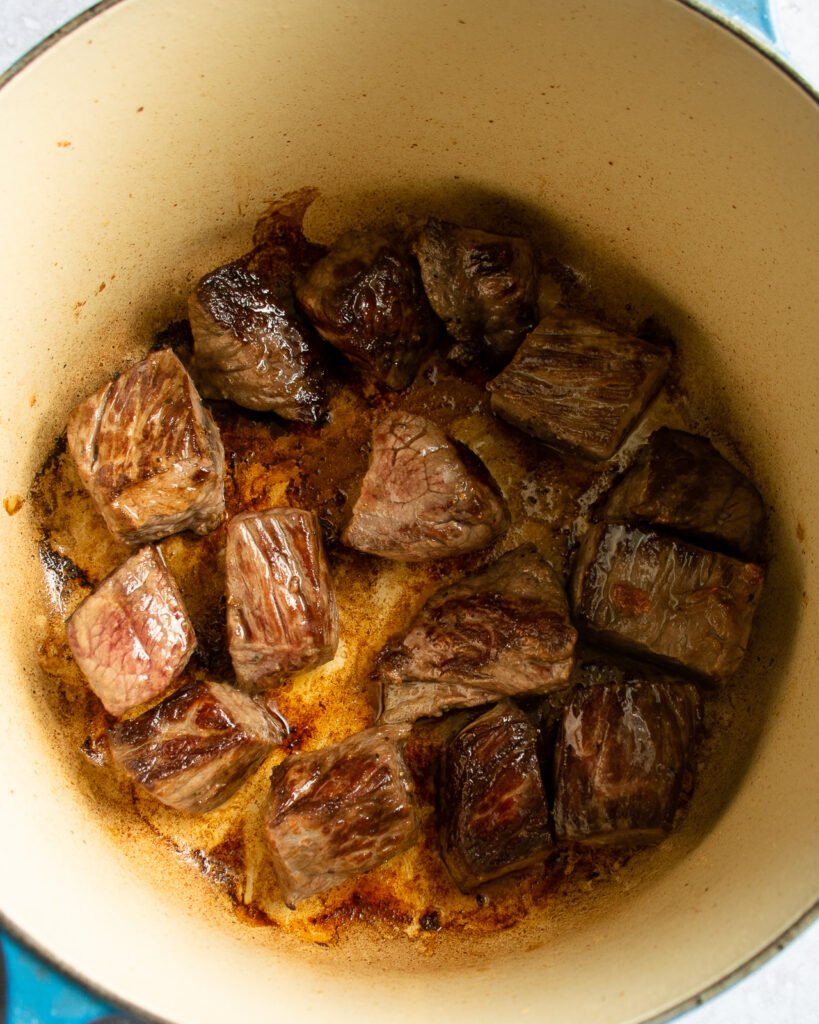 Once the beef has browned, set it aside and start adding the chopped vegetables and tomato paste. Let that tomato paste toast in the pot to enhance and give some depth to the flavor of the stew. Then, you can pour in that Guinness and scrape up all the delicious brown bits that have formed on the bottom of the pot. 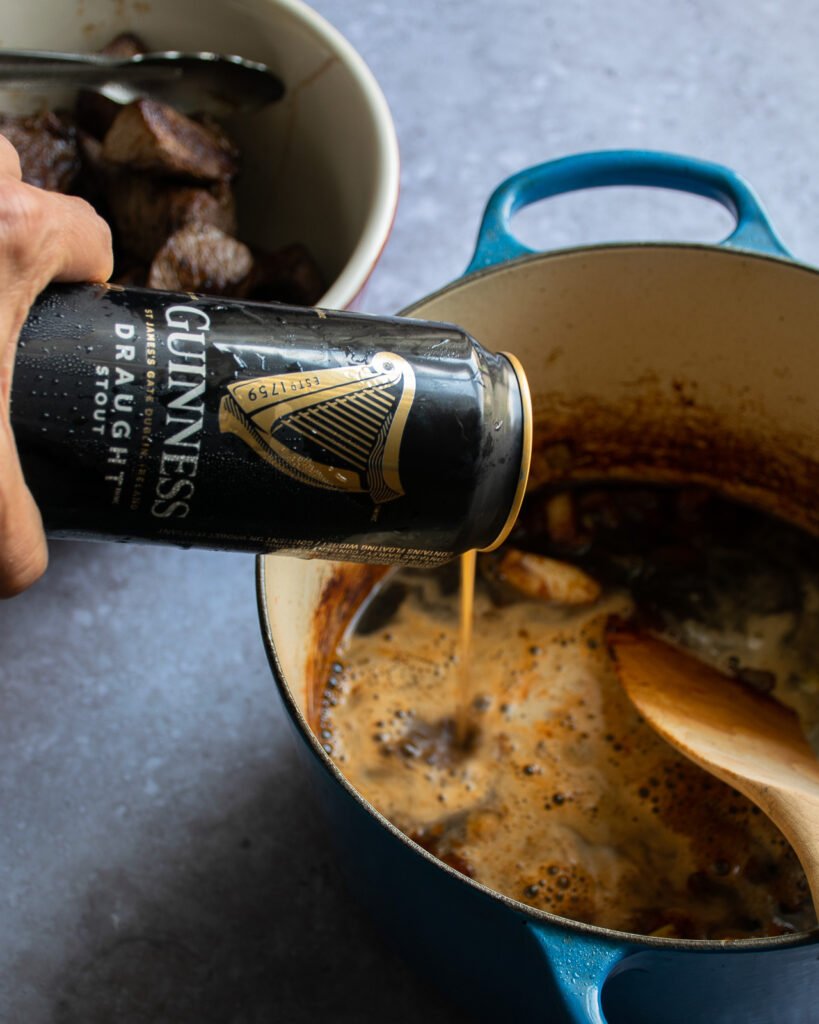 Add to that some really good beef stock so that there’s enough liquid in the pot to almost cover all the beef. If the beef cubes are poking their heads just above the liquid’s surface, that’s perfect. Bring this mixture to a simmer. Now, this is important… when I say “simmer”, I mean just that. I do not mean “boil”. When the stew is simmering, you should see just gentle bubbles rising to the surface. A more rapid boil won’t do the beef cubes any favors and might toughen them. Take it easy, enjoy your glass of Guinness and let the stew simmer. After a little over an hour, you’ll add the larger vegetables to the pot. I add these vegetables two thirds of the way through the cooking time because I don’t want them to be mushy, but tender. Leave the carrots, rutabaga and potatoes in larger chunks so that they’ll be tender in about 45 minutes time. 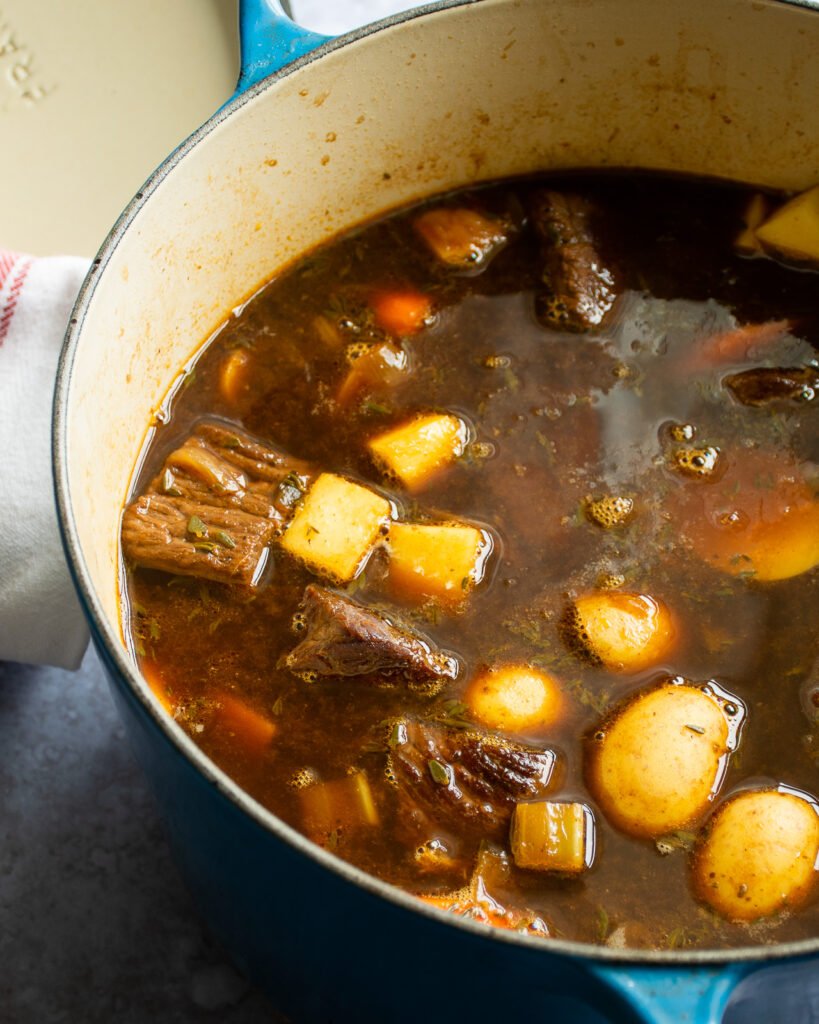 If at that time, you want to reduce the sauce to thicken it a little, remove the lid and let the stew continue to simmer for a few minutes. 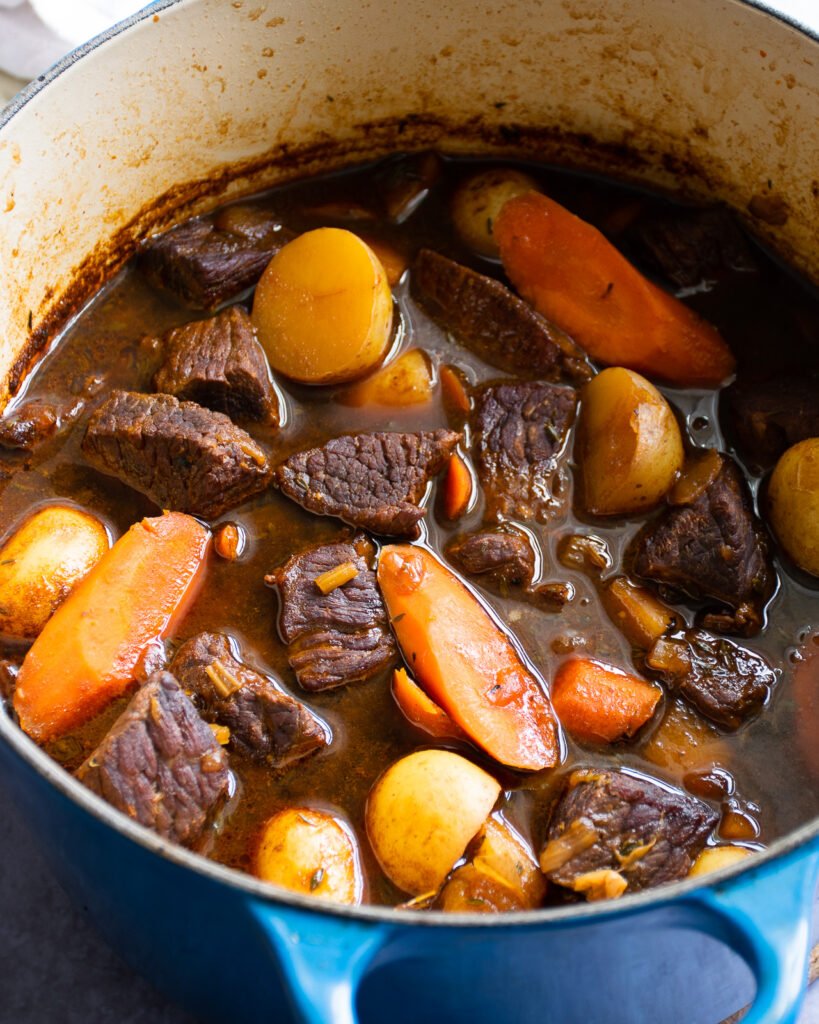 Now, you could serve this stew with some crusty bread (like No Knead Bread), but even better would be some Irish Soda Bread to soak up any juices that are left in your bowl. If you still have another can of Guinness left, feel free to enjoy that in a glass, but a nice medium to heavy bodied red wine would go nicely too. 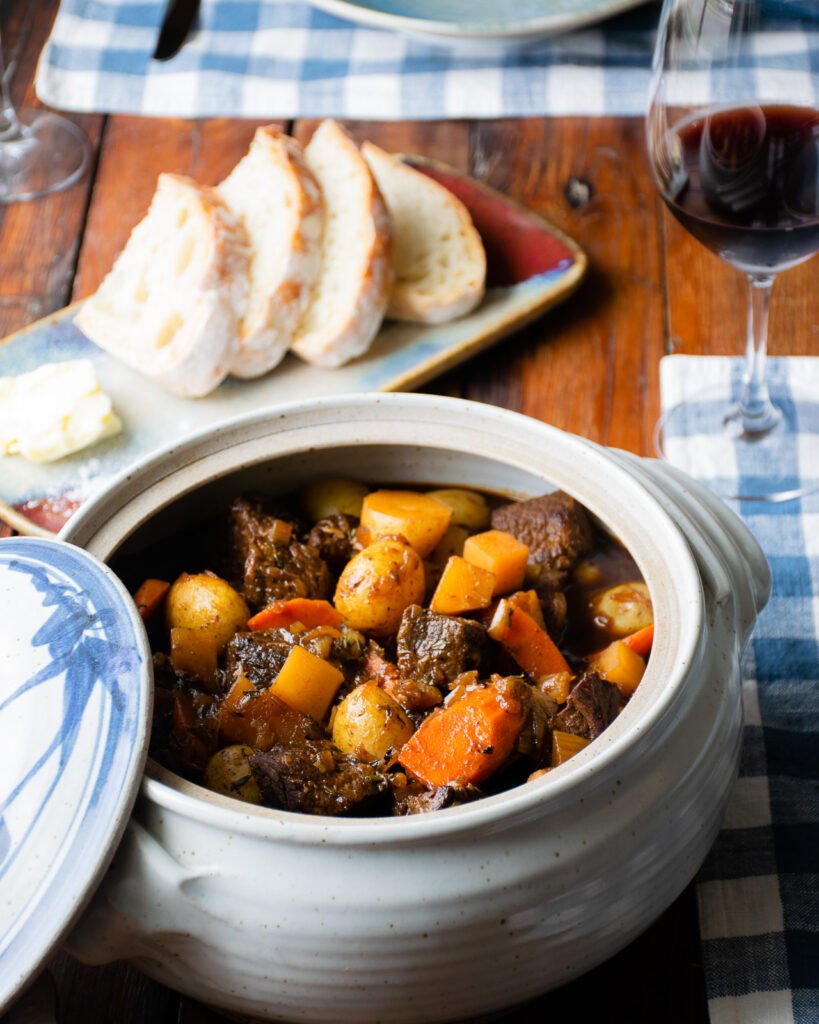 To braise means to cook something partially covered in liquid, in a pot covered with a lid, at a low...View Technique

From making the perfect cornbread, to searing a steak, to making delicious braised coq au vin, or even deep frying...View Technique

Hello! All photos and content are copyright protected. Please do not use our photos without prior written permission. If you’ve made this recipe and would like to share it with your friends, please link back to Guinness Beef Stew on Blue Jean Chef. Thank you!