How to Cook Bacon

Yes, you can just put bacon in a pan on the stovetop to cook it, but let me show you how to cook bacon with other methods that create less mess and leave you with perfectly flat bacon strips.

First of all, what is bacon? Bacon is pork belly that has been cured in a brine or with a dry rub, then smoked and then sliced. This describes what is known as “bacon” in the United States and is referred to as “streaky bacon” in the United Kingdom. There are, however, other sorts of bacon in the world. Canadian bacon (which is called back bacon in Canada) is meat from the pork loin that is cured and fully cooked. Pancetta is Italian bacon. It is pork belly that is brined, but not smoked. It’s also rolled before it is sliced so it looks like a round circle, rather than a long strip. Irish bacon is pork from the loin that is brined, but for this article we’re focussing on the American, streaky bacon.

American/streaky bacon is salty, fatty and delicious and creates one of the best smells to come out of a kitchen (unless you’re vegetarian, of course, and even then sometimes!) Because bacon has a high fat content, it can create a big mess when you cook it and it can wrinkle and curl when treated with high heat which leads to uneven cooking. So, there are a few tricks to cooking bacon properly. 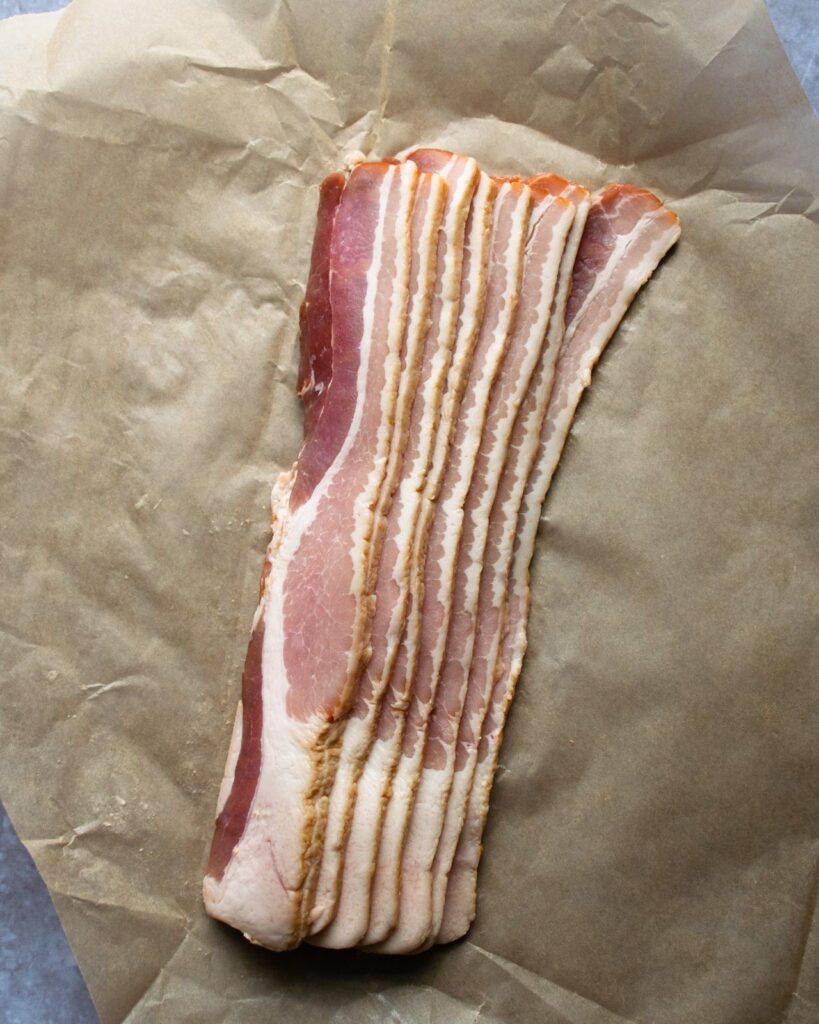 You can buy bacon from your meat or deli counter or you can buy packaged bacon. Either way, look for bacon that has some fat content, but a decent amount of red meat as well. You can buy it thick cut or thin cut and most of that decision comes down to personal preference. When using bacon in a recipe, however, I tend to lean towards thick cut bacon because it holds its shape better and doesn’t shrink as much. Thin cut bacon, when cooked and chopped can become such a small insignificant piece that it can get lost in a recipe. You’ll also see “uncured” bacon on the market. This is bacon that is nitrite free, but cured with natural ingredients (like beet powder). If you are trying to avoid nitrites, look for uncured bacon. If you’re looking for the meatiest, leanest bacon, you’ll want to keep your eyes out for “center cut” bacon. Thick, center cut bacon is my go-to! Whichever bacon you choose, 1 pound of bacon usually serves 4 people at breakfast time.

Once your bacon is home, store it wrapped in its package or in brown paper in the refrigerator for 7 to 14 days. Bacon does freeze very well, but if you do plan to freeze it, separate the strips or rashers first. Lay them separately on parchment paper and then roll the parchment paper up and place it in a zipper sealable plastic bag, removing as much air as possible before putting it into the freezer. That way, you’ll be able to take one, two or however many rashers of bacon out of the freezer at one time without having to defrost the whole pound. Trying to separate strips of bacon from a frozen pound could be one of the most frustrating things you could do in the kitchen, so separate the strips before freezing and you’ll thank yourself later.

Cooking on the stovetop

If you want to cook bacon on the stovetop, start by placing the bacon into a cold pan and then turning on the heat. This slow rise in temperature helps render the bacon fat more slowly and more completely leaving you with crispier bacon sooner. Because strips of bacon are rectangular, they fit better in a square pan than in a round skillet, so if you have a square pan, that’s the perfect pan for cooking your bacon on the stove. Bacon will curl in a skillet on the stovetop, so use a bacon press to keep the bacon flat in the pan. The added bonus of using a bacon press is that you won’t have to flip the bacon over to cook the other side. You might want to invest in a splatter guard when cooking bacon on top of the stove since it does have a tendency to spit and can be quite messy.

Cooking in the oven

My preferred method of cooking bacon is on a sheet pan in the oven. The bacon stays flat when cooked this way, and I don’t have bacon splatter all over my cooktop. Sheet pans are also rectangular in shape and vary in size, so they fit more bacon at one time. You can put the bacon directly on the sheet pan, or line the sheet pan with parchment paper to make clean up easy at the end. Another trick is to place the bacon on a rack on top of the sheet pan. The rack allows the bacon fat to drip away from the bacon and bacon that is removed from the fat becomes crispier faster. Cook bacon in the oven at 400ºF for 15 to 20 minutes, depending on how thick the bacon is. 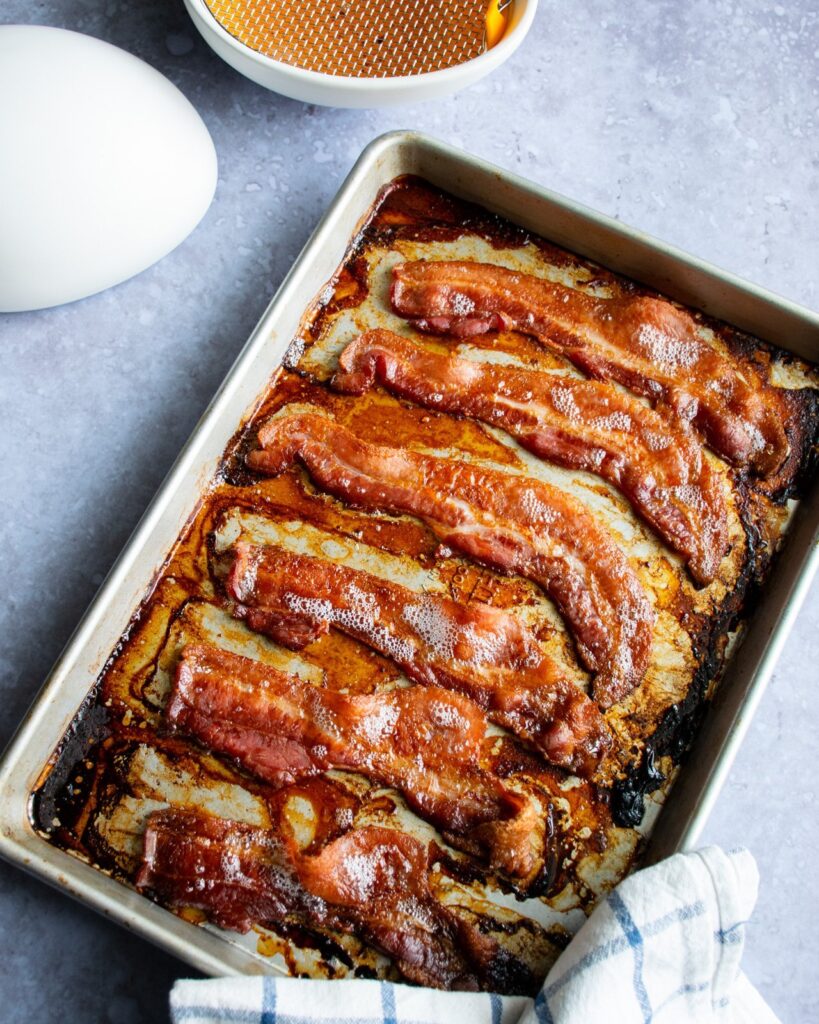 Cooking in the microwave

You can cook bacon very quickly in the microwave. Simply put the rashers of bacon between two layers of paper towels and then microwave them for 1 minute per strip of bacon. This does make the microwave tray dirty, but you’ll have something to clean up no matter how you cook bacon. At least you can just dispose of the greasy paper towels and you won’t have extra grease to manage at the end.

Cooking in the air fryer

Finally, the air fryer is a pretty great appliance for cooking bacon if you follow one simple rule. Because the bacon will cook in the air fryer basket and all the grease will drip down into the air fryer drawer below, it’s important to put some water in that bottom drawer to catch the grease. This will prevent the grease from getting too hot and smoking. So, water in the bottom drawer (just enough to cover the bottom by about ½-inch) and you’ve got a great way to cook bacon without splatter everywhere. The only down side is that you won’t be able to fit too many strips of bacon in your air fryer basket, but if you’re only cooking bacon pieces or are happy with just a few halved bacon strips, you’ll be very happy with this method.

You can’t have bacon without bacon grease, so there are a few things to know about the fat that is rendered off this divine piece of pork. Fat inhibits crisping. That means that bacon won’t really crisp up when it is sitting in rendered fat. For that reason, it’s important to either drain off the bacon grease, or elevate the bacon above the grease as the bacon is cooking. In the oven,  you can elevate the bacon by using a rack (as mentioned above). On the stovetop, you’ll have to drain the bacon off into a vessel of some kind. You should never pour bacon grease down the sink because it can solidify and clog your drain. Instead, pour it into a vessel to store the bacon grease (in the refrigerator) for future cooking, or into a silicone mold which can be frozen. When the bacon grease has solidified, you can pop it out of the flexible silicone mold and into the garbage. Easy.

As for the bacon, you can store leftover bacon in the refrigerator wrapped in plastic or in a sealable bag, but what am I talking about? There’s no such thing as leftover bacon.

How to Cook Bacon

Bacon knots are hands down the prettiest way to present bacon. Just a simple tie and then seasoned with pepper...
View Recipe

This bourbon bacon burger might just be the best burger ever! You cook the bacon AND the burger in the...
View Recipe

These potatoes and green beans are a great side dish that will disappear quickly. The air fryer crisps up your...
View Recipe

Whether you're using up leftover turkey or not, this California turkey club sandwich is a delicious and beautiful sandwich that...
View Recipe