Butterflying a piece of meat increases the surface area of that meat, allowing it to be easily rolled around a stuffing or filling. It's easy and a useful trick to have up your sleeve.

Let's do this!
Advertisement - Continue Below 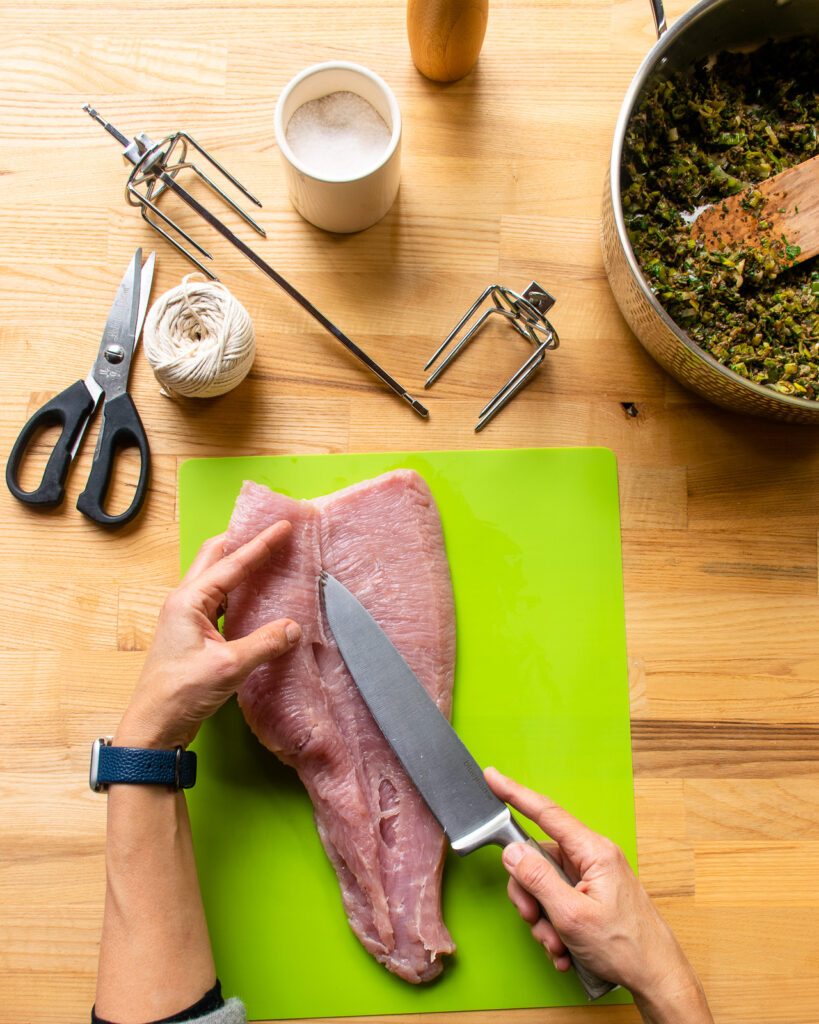 What Does it Mean to Butterfly?

Butterflying a piece of meat (or poultry or fish) means to slice into the meat parallel to the cutting board, cutting it in half but not all the way through to the other side so that the two halves are attached and you can open them like pages of a book. Essentially, it means to cut meat in half, making it thinner but also doubling the surface area. 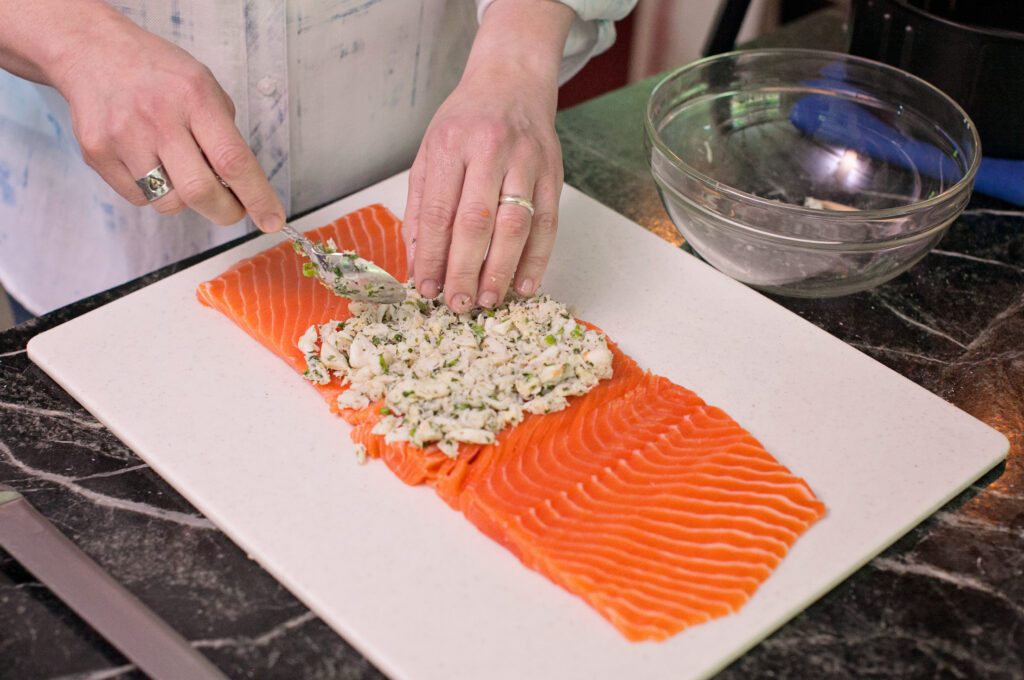 There are a few reasons why you might want to do this, but the most likely scenario is that you are preparing the meat to wrap around a stuffing. Butterflying the meat not only makes the meat thinner, but gives you more surface area to more easily roll around a filling. You might also butterfly a piece of meat, or chicken breast because you want it to cook faster and making it thinner will accomplish this. A butterflied chicken breast or steak has more surface area to come in contact with a marinade and with your cooking surface, giving it more flavor. Butterflying also gives you the opportunity to make a piece of meat more even in thickness. You can butterfly a wider section of meat in order to make all areas evenly thick. This ensures even cooking. 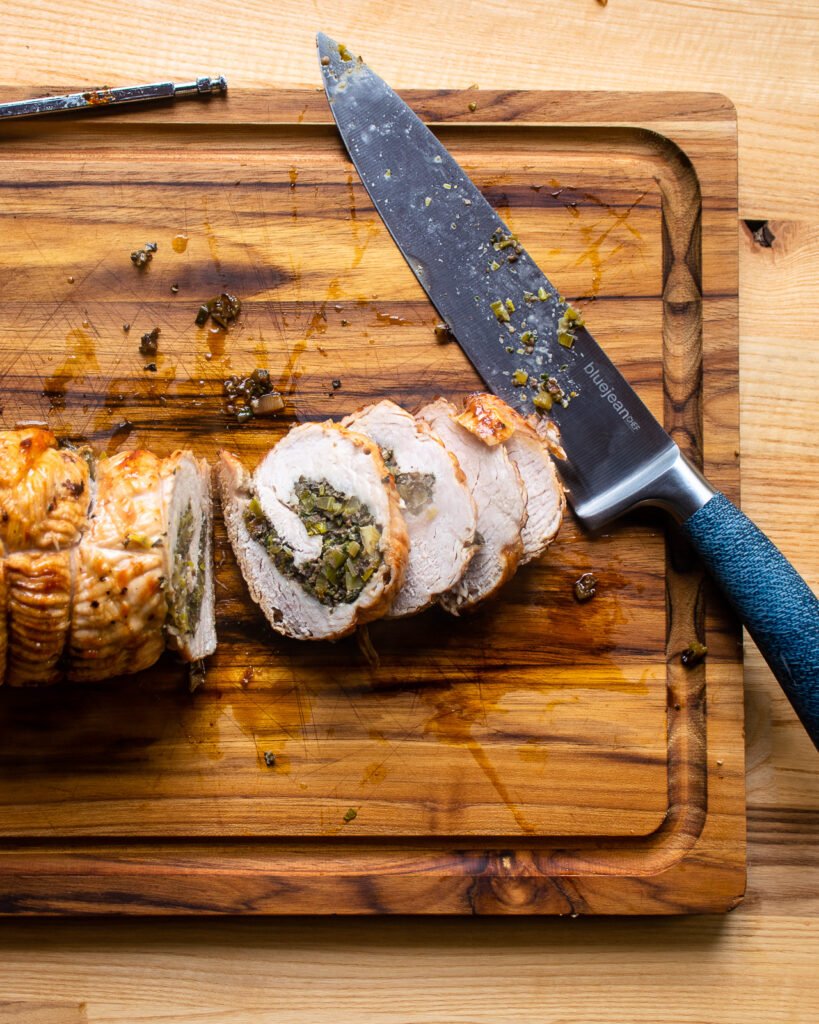 To Double-Butterfly a piece of poultry or meat means simply to butterfly twice, making the piece of poultry three times as wide and a third as thick. You do this by slicing into the meat only one third of the way down instead of halfway down, flip the meat over and repeat. As a result, the “pages” of meat will open like an accordion instead of as a book.

The steps below walk you through how to double-butterfly a turkey breast for a turkey roulade. You can follow these same steps for a large steak, a large piece of fish or even a chicken breast on a smaller scale. If you want to simply butterfly (as opposed to double-butterfly), simply make one slice only and cut halfway down from the top of the piece of meat. 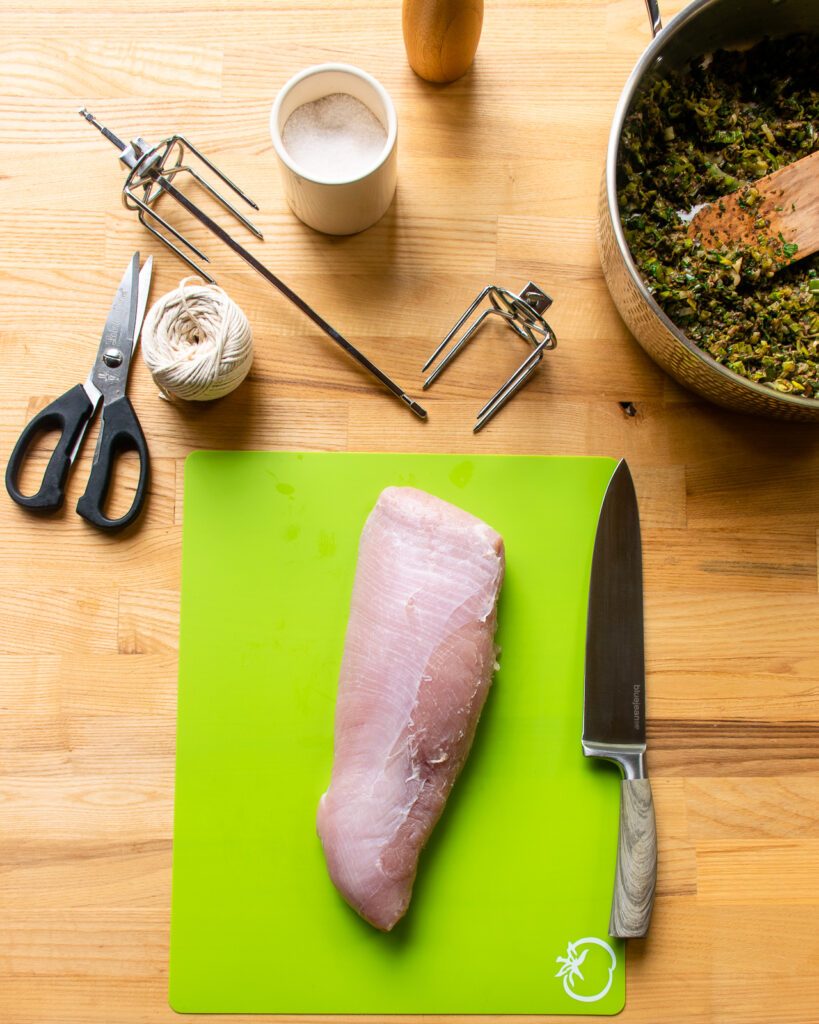 Step One: Set Yourself Up

Place your turkey breast on the cutting surface parallel to your knife. 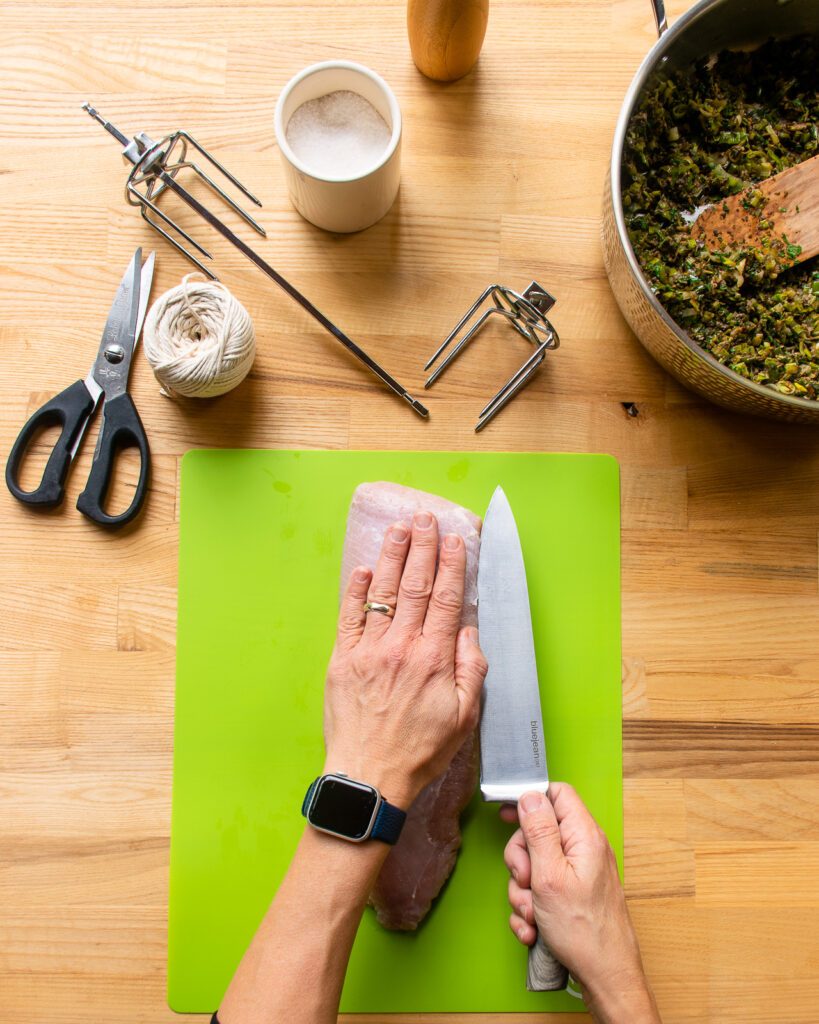 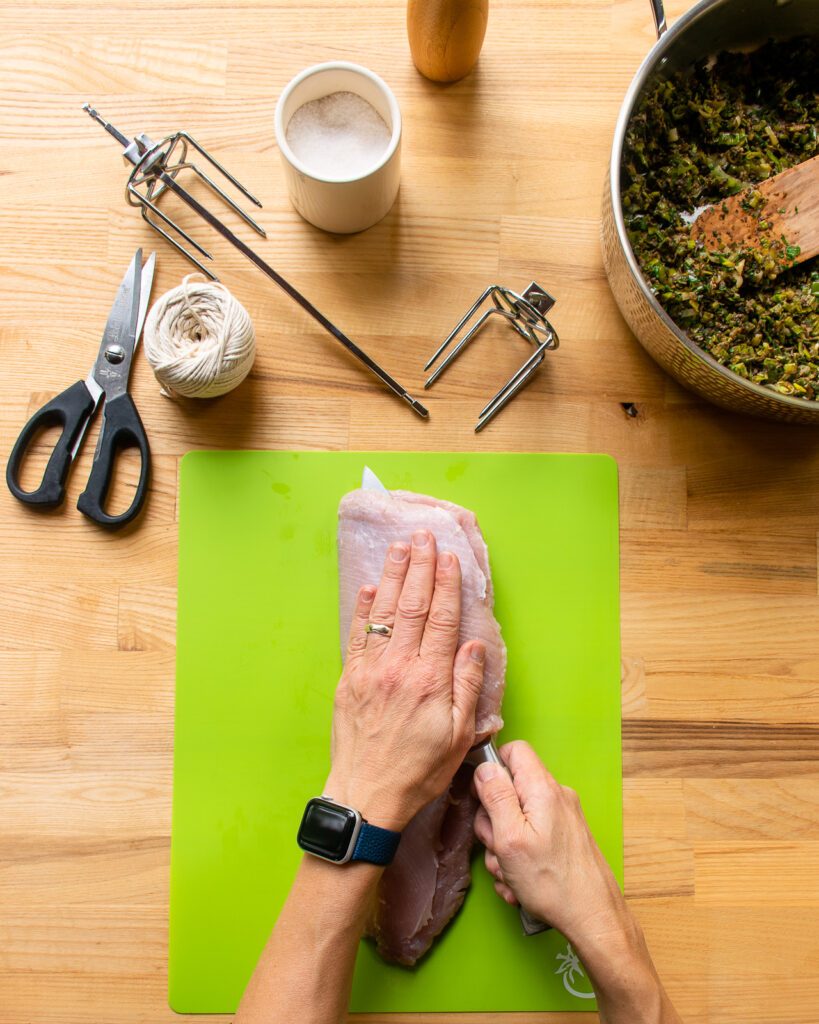 Slice into the turkey breast, but stop before you reach the other side. Do NOT slice all the way through. 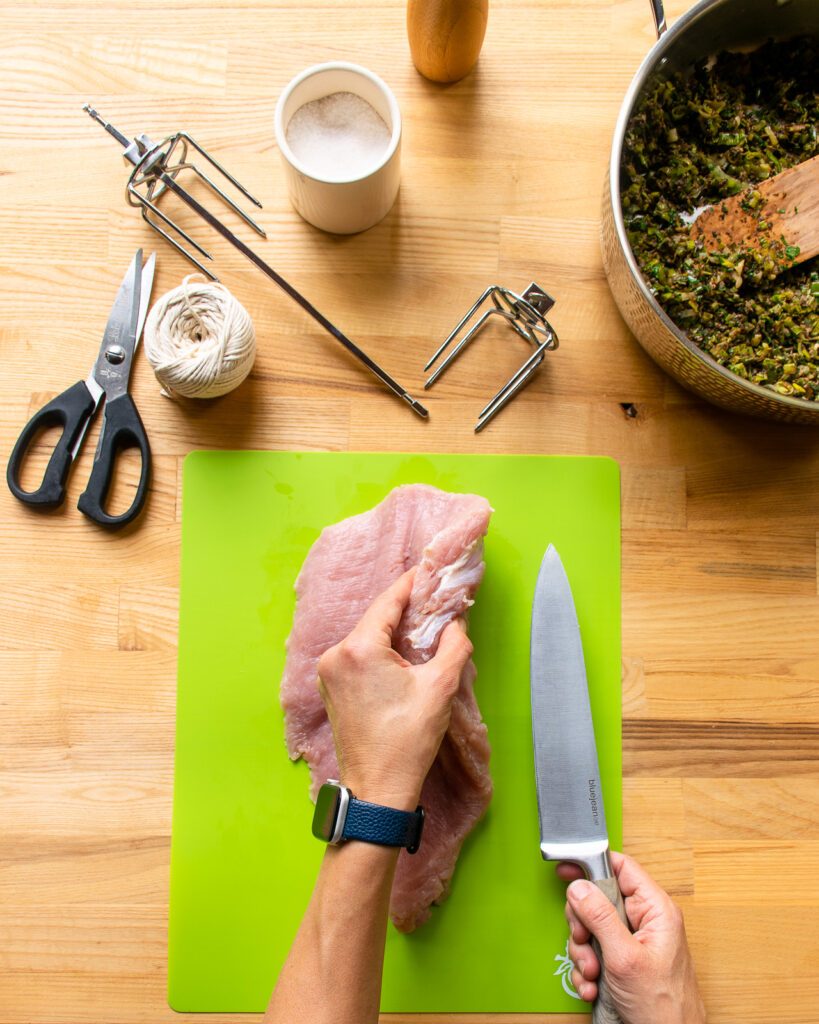 Step Four: Turn the Meat Over

Flip the turkey breast over so that the cut side is away from your knife. 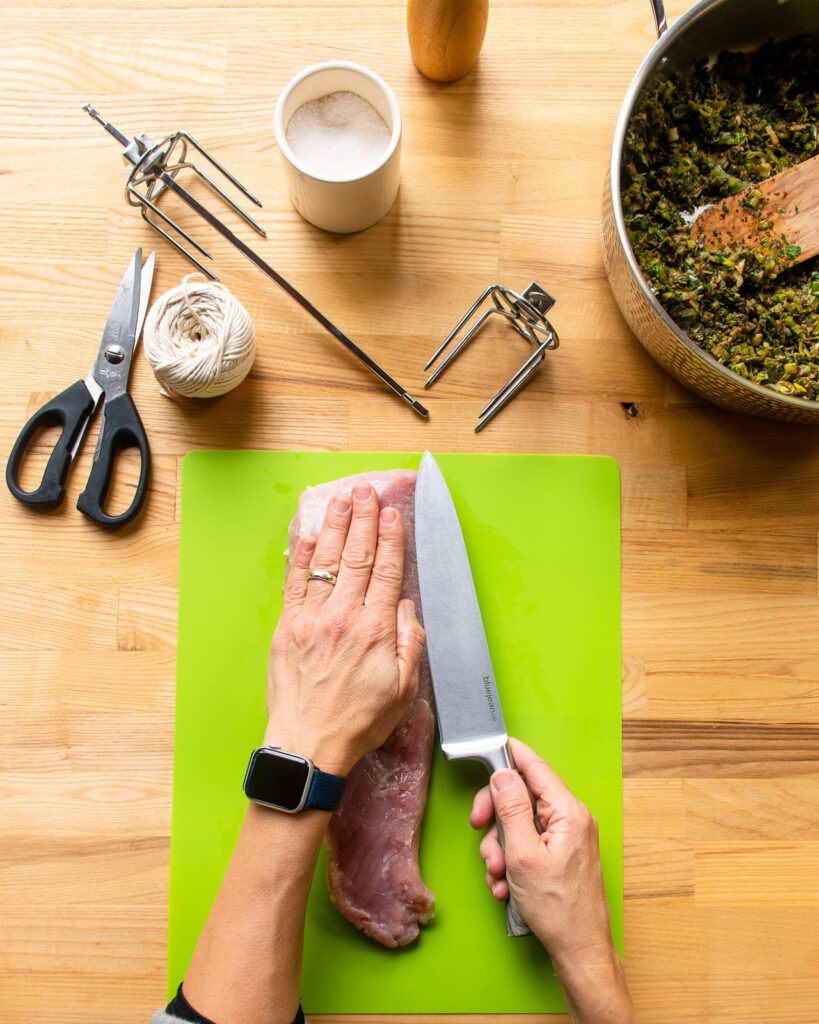 Step Six: Open up the Meat

Again, stop before you cut all the way through the turkey breast so that the turkey is still in one piece. If you make a hole in the turkey, don’t fret (you can see a hole above). You can always patch this up or make sure you put this part of the turkey near the beginning of the roll so that it gets covered with another layer of turkey. 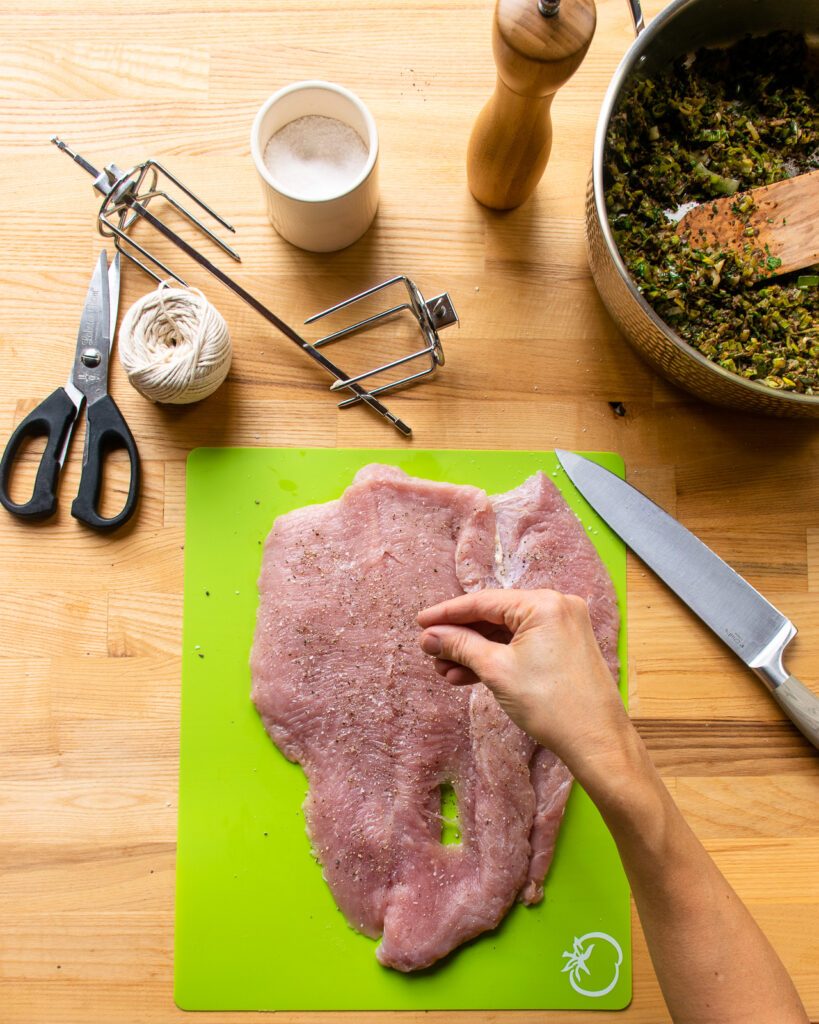 You may want to pound the meat at this point to get it to be evenly thick in all areas. Then season the meat with salt and freshly ground black pepper. 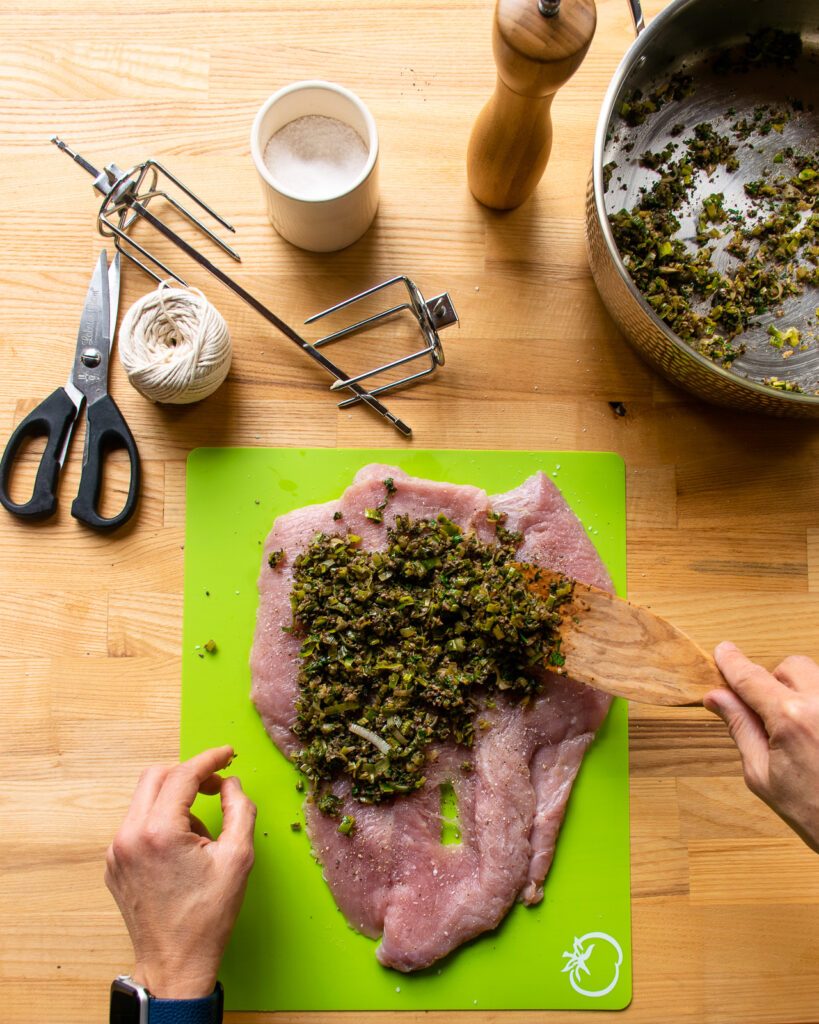 Add your filling to the double-butterflied turkey, spreading it out evenly, but leaving some space at the edge farthest away from you. 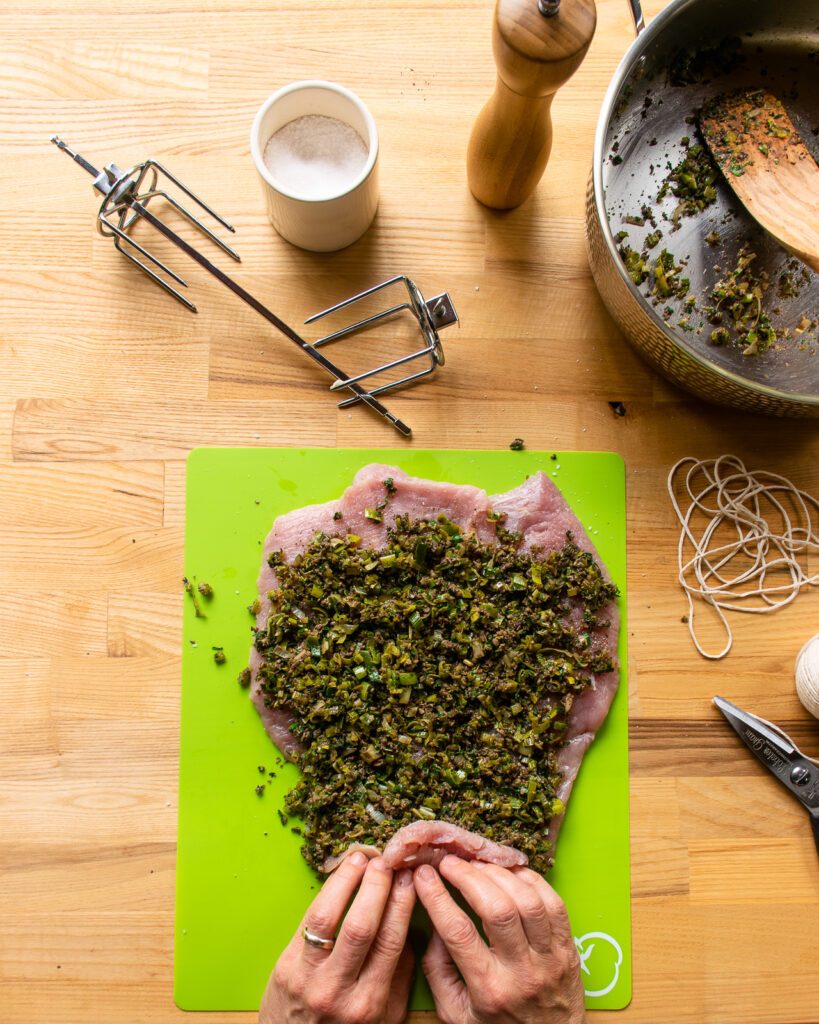 Step Nine: Roll it Up

Roll the turkey up around the filling, starting at the edge closest to you. 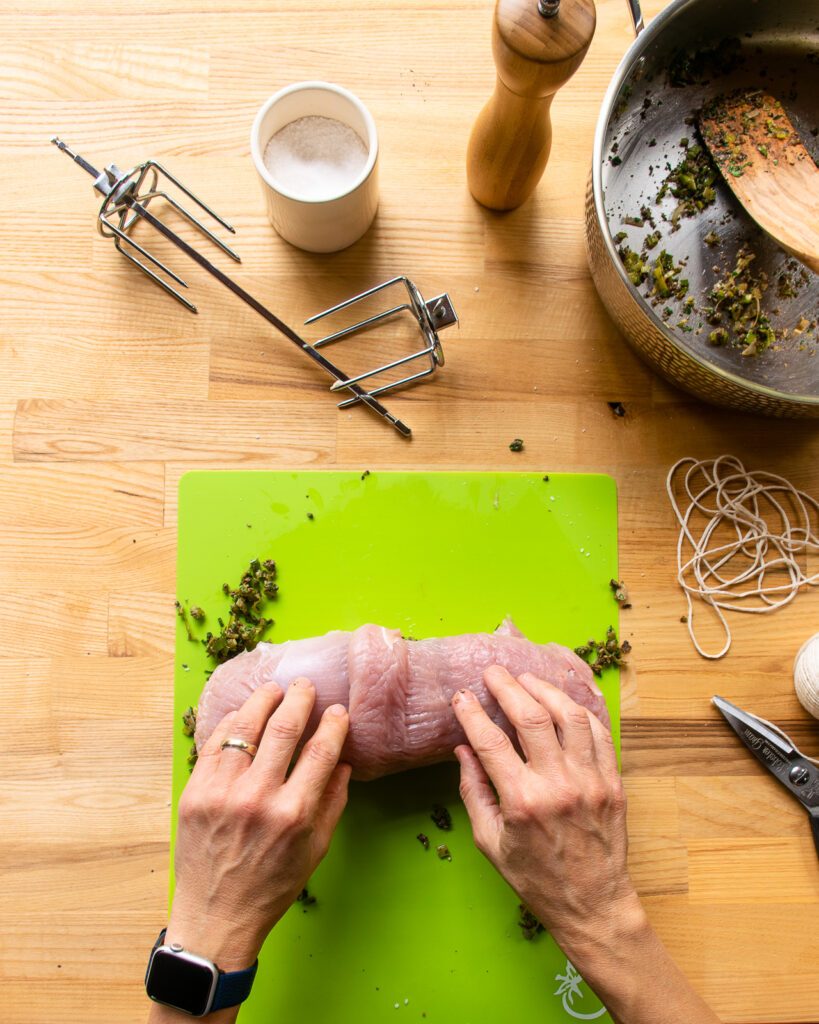 Step Ten: Get Ready to Tie it

Get ready to tie the roulade in place. There are many ways you can do this. You could cut several short pieces of kitchen twine and tie the roulade at regular intervals. To learn how to tie the roast efficiently with one piece of twine, go to the next lesson on How to Tie a Roast or Roulade.

This turkey roulade with leeks, mushrooms and marsala cooks in an air fryer on the rotisserie, but you can roast...
View Recipe

A spatchcocked chicken is a chicken with the backbone removed so that it lies flat. It's always much easier to...
View Recipe

Here’s an elegant one pan dinner worthy of a dinner party. The trickiest part is double-butterflying the pork loin. If...
View Recipe