How to Cut up a Whole Chicken

Breaking down a whole chicken is a great skill to have because it allows you to customize how you want your chicken pieces - whole legs or drumsticks and thighs, whole breasts or half breasts. It gives you the control and it's not that hard to do as long as you have a good sharp knife.

Let's break it down!
Advertisement - Continue Below 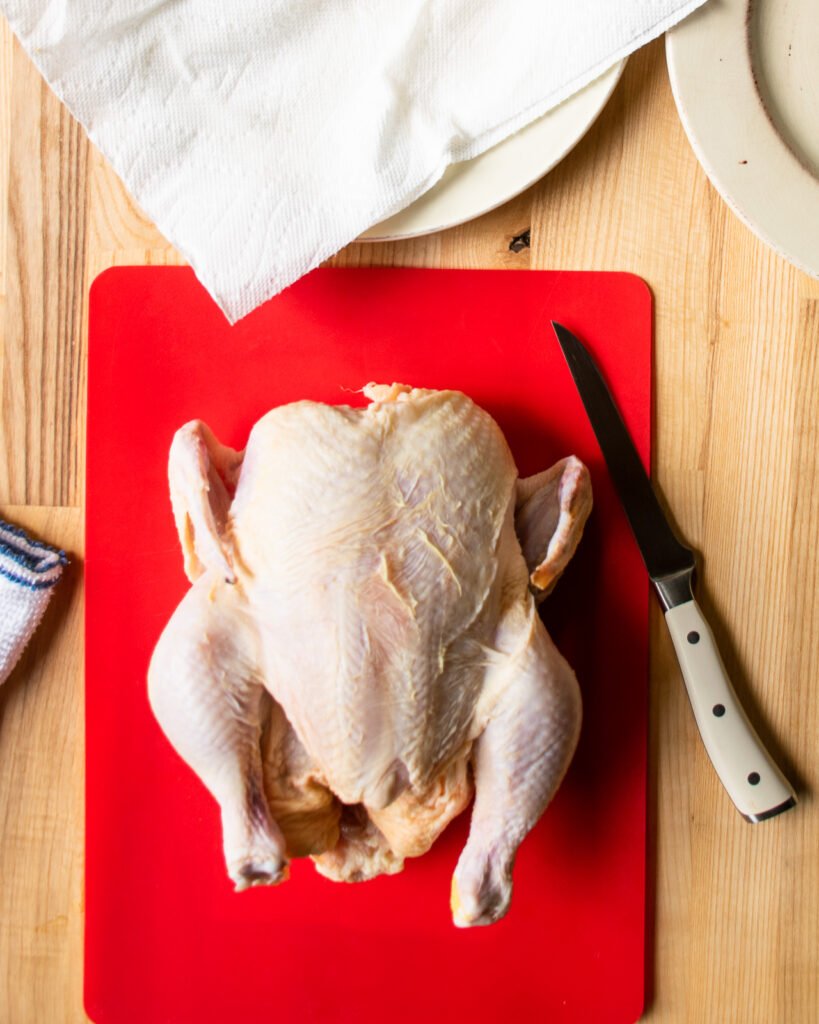 Why Break Down a Chicken at Home?

There are many reasons why you should want to break down a chicken at home. First of all, aside from the fact that it is less expensive, buying chickens whole gives you the leeway to leave it whole should you decide to roast the chicken. If you buy a chicken already cut into pieces, roasting it whole is no longer an option. Secondly, cutting the chicken up yourself often results in chicken pieces that are in better shape than when they are processed in a hurry by butchers. You can trim the fat nicely, take care not to cut the skin and end up with beautifully prepared chicken pieces ready for whatever you’re cooking. Finally, when you break down a chicken on your own, you can save trimmings like the backbone and the wings for making your own stock or bone broth – just store the bones in the freezer until you have enough. Sometimes one reason is enough. I’ve just given you three (or four)! 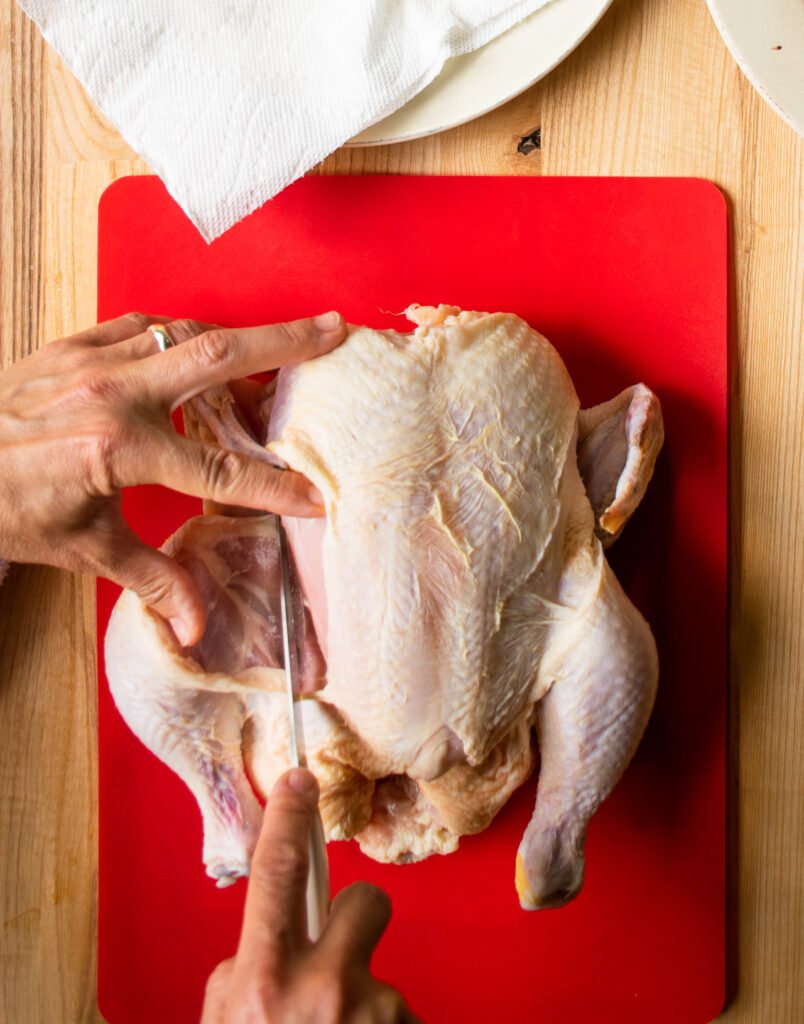 Step One: Remove the Leg

The first step is to grab your sharp boning or chef’s knife and slice through the skin between the leg and the body of the chicken. Push the leg away from the body and down towards the cutting board as you cut into the skin (and only the skin). 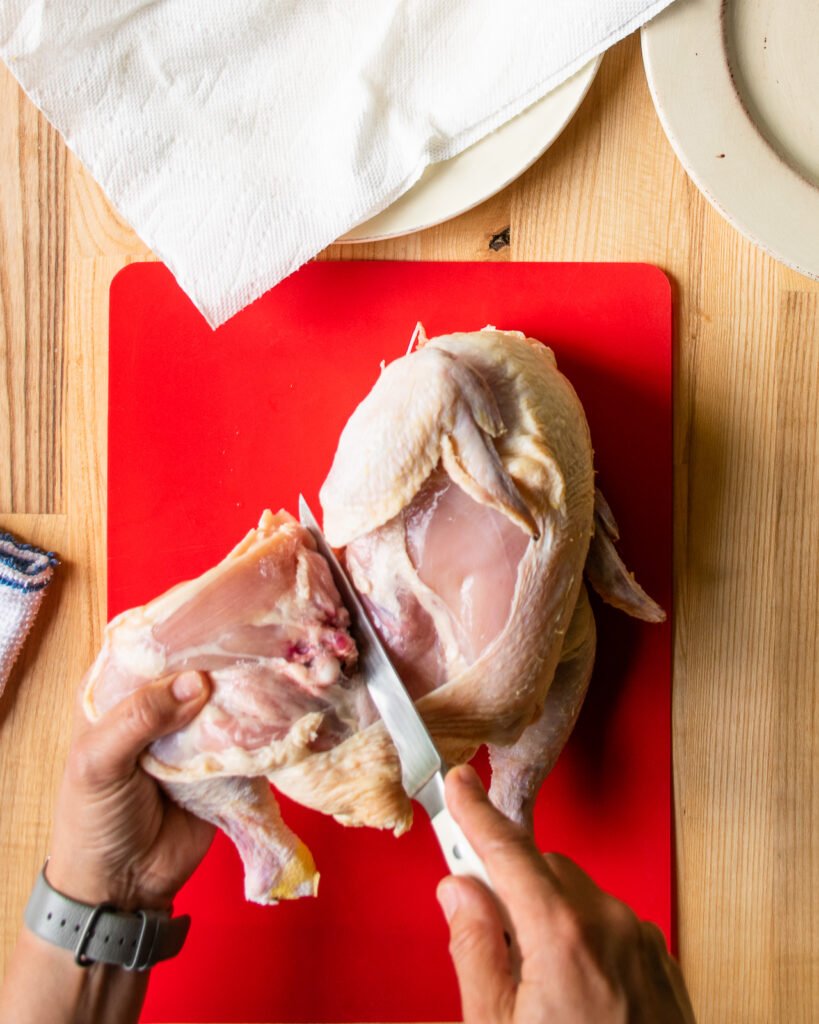 When you have cut through the skin, grab the leg and pop the bone away from the body of the chicken. Then, slice the leg off the chicken doing your best to cut as close to the backbone as possible. 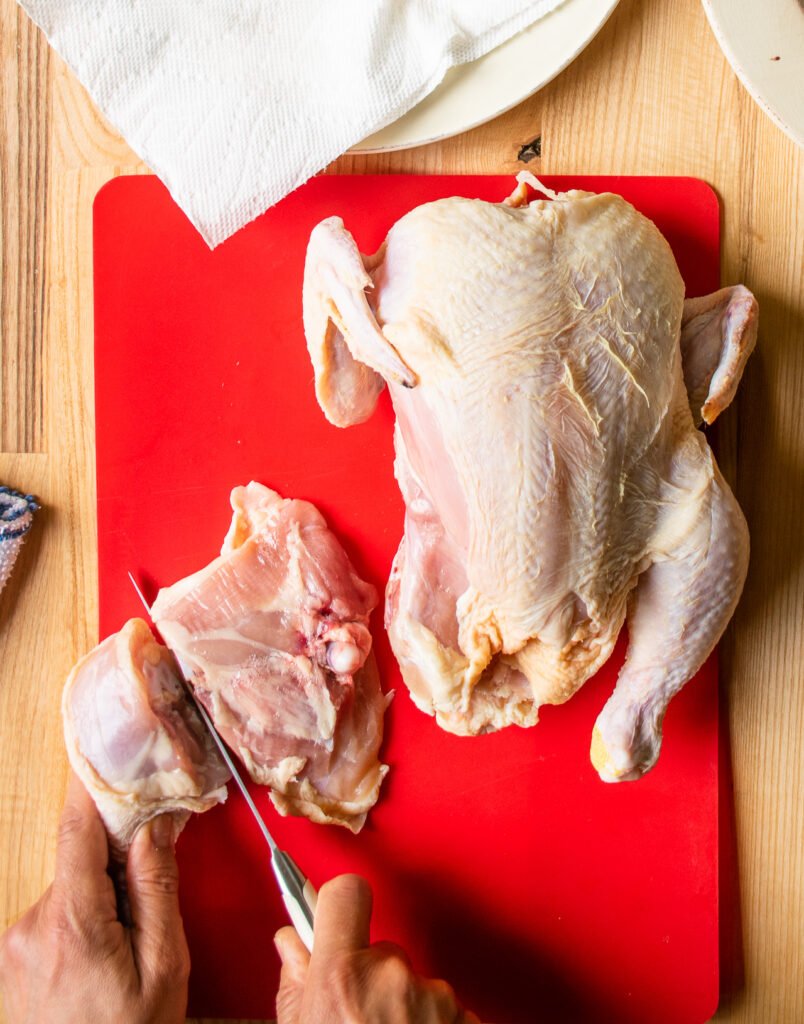 Step Two: Separate the Drumstick from the Thigh

If you look at the chicken leg, you will see a line of white fat that divides the drumstick from the thigh. If you slice along this fat line, your knife should easily find the joint and you’ll be able to slice and separate the drumstick and thigh easily. Of course, you’ll only do this if you want to use drumsticks and thighs, rather than leaving the leg whole. Trim away any excess fat from the chicken thighs, as desired. Repeat steps one and two with the leg on the other side of the chicken. 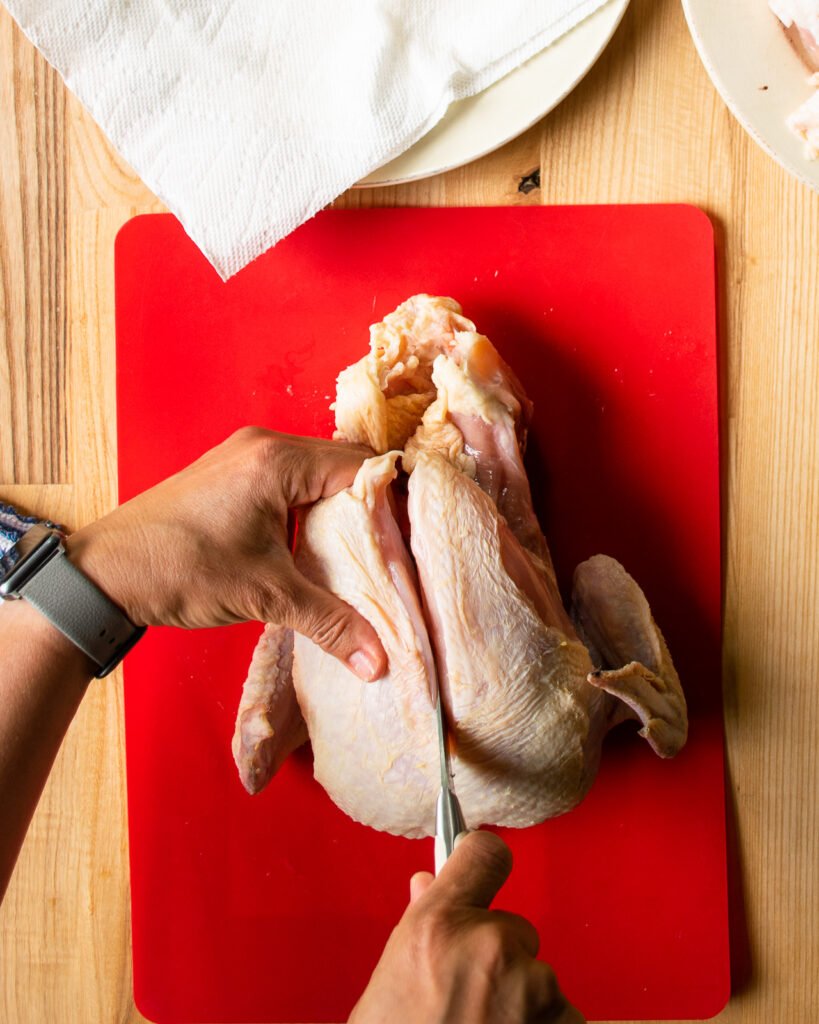 Turn the chicken so that the cavity opening is away from you. Take the knife and cut along one side of the breast bone dividing the whole chicken breast into two split breasts. You’ll need a little more force for this step. 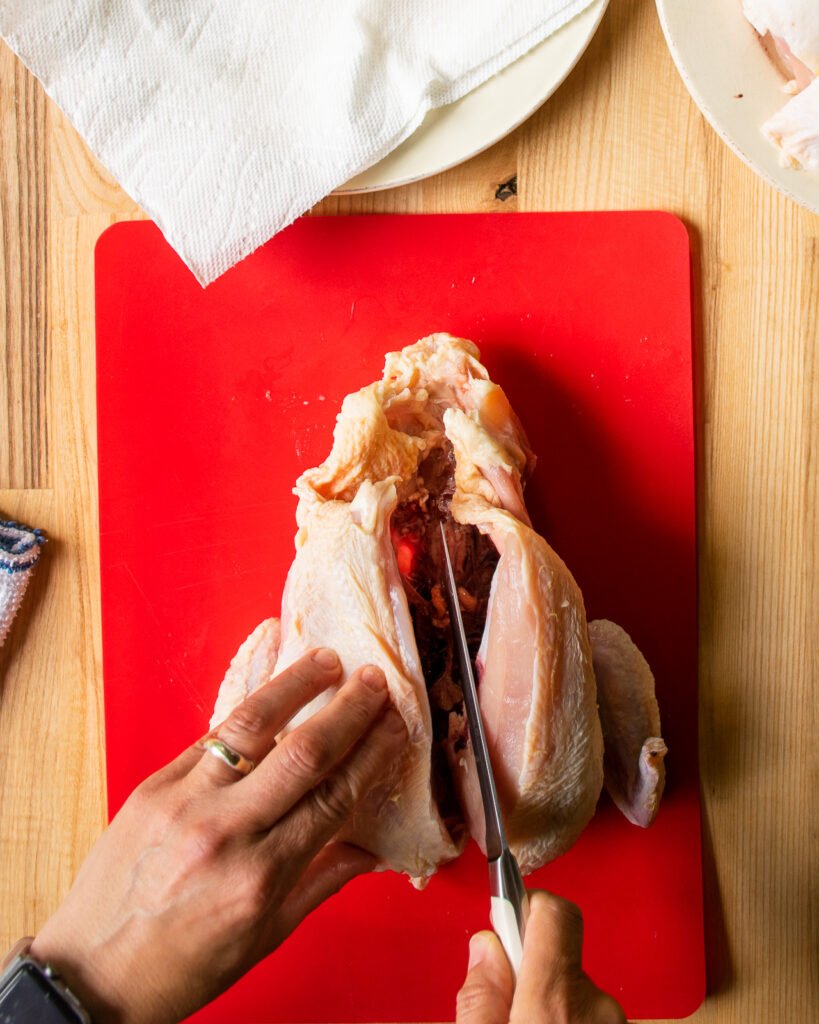 Once the chicken has been opened up, cut through the back ribs on the same side as the breast you are removing until it is separated from the other side. Then, repeat the process of cutting through the back ribs to remove the backbone from the second breast. This step can be tricky since there is little left to hold on to and the bones can be hard to cut through. If necessary, use a bigger chef’s knife instead of a boning knife. 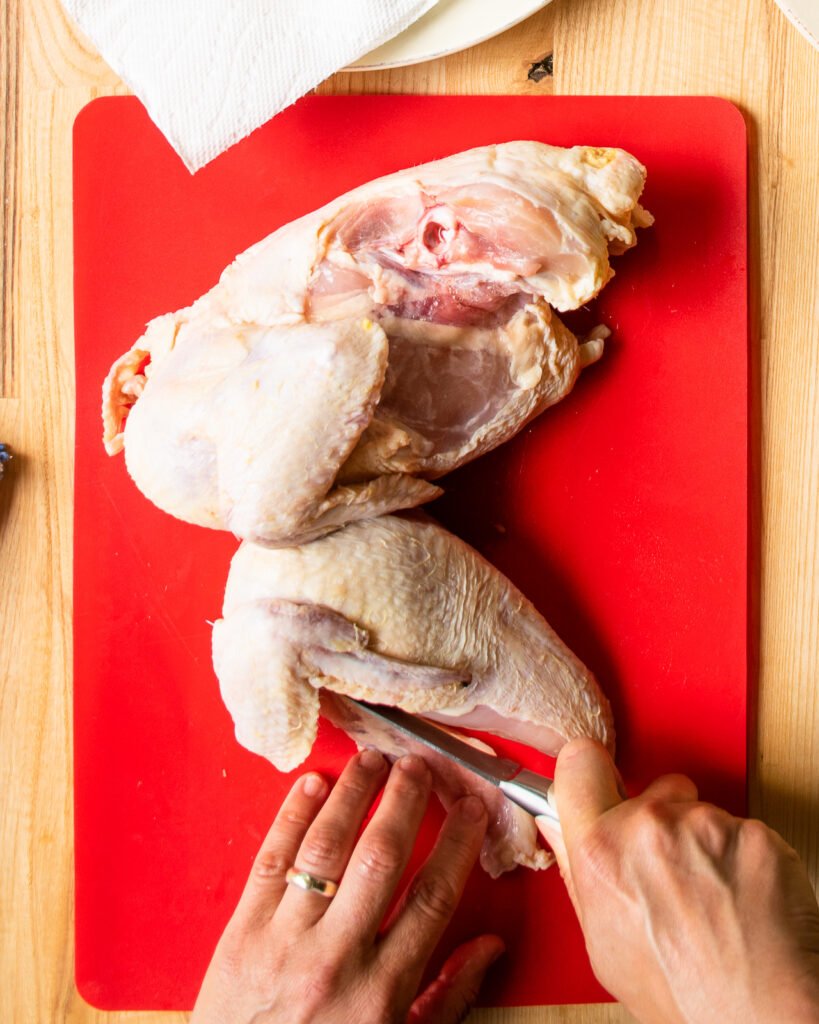 At this stage, you can trim the chicken breast of any excess fat and cut away any rib bones that don’t have meat on them.

In this step, removing the wing, you have another decision to make. You might want to remove the whole wing and save it to make chicken wings (assuming you have many more chicken wings to accompany the two you’ll be removing from this chicken). If that’s the case, cut through the joint right where the wing meets the breast. I like to have what is called an “airline” chicken breasts with the first portion of the wing remaining on the breast. To make an airline chicken breast, slice through the joint between the first and second sections of the wing. Save the wing sections you trim off for chicken stock in a freezer bag. 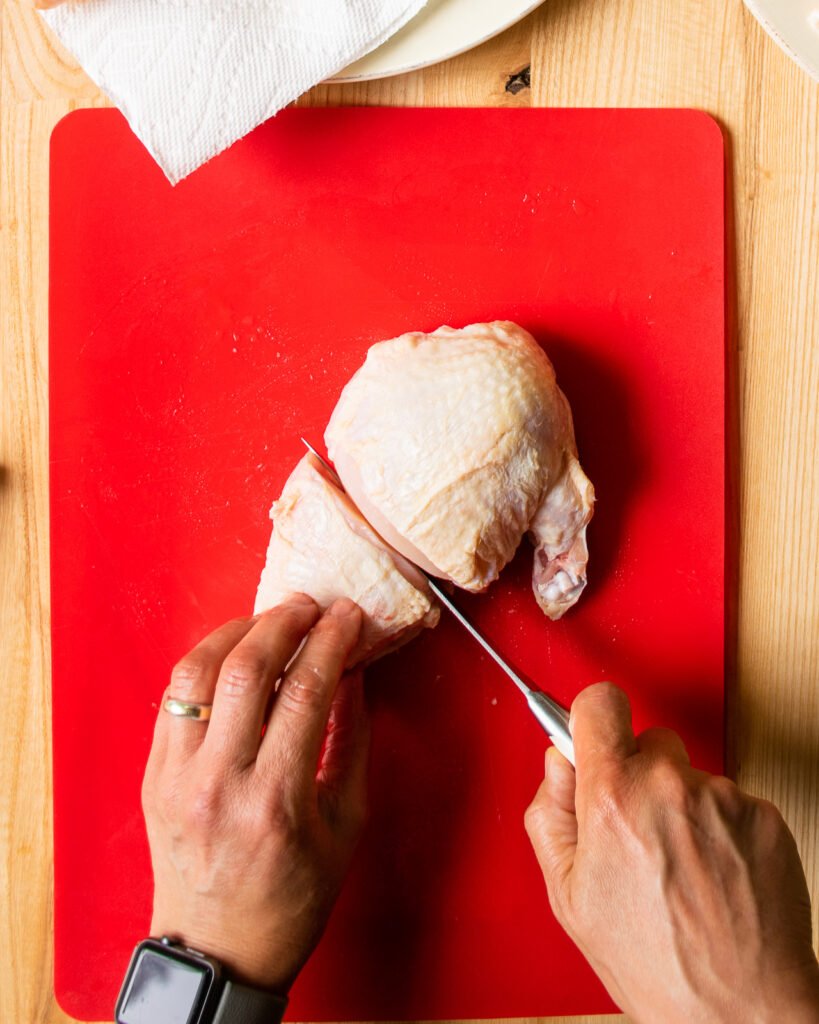 These days I find that chicken breasts can be very big – too big for a sensible portion. So, I often slice the breast into two pieces and allow guests to have one or two helpings. For this step, you will probably need to advance to a bigger knife like a chef’s knife so that you are able to slice through the breast bone. Anchor the tip of the knife with one hand and press down firmly with the handle to cut the breast in half. 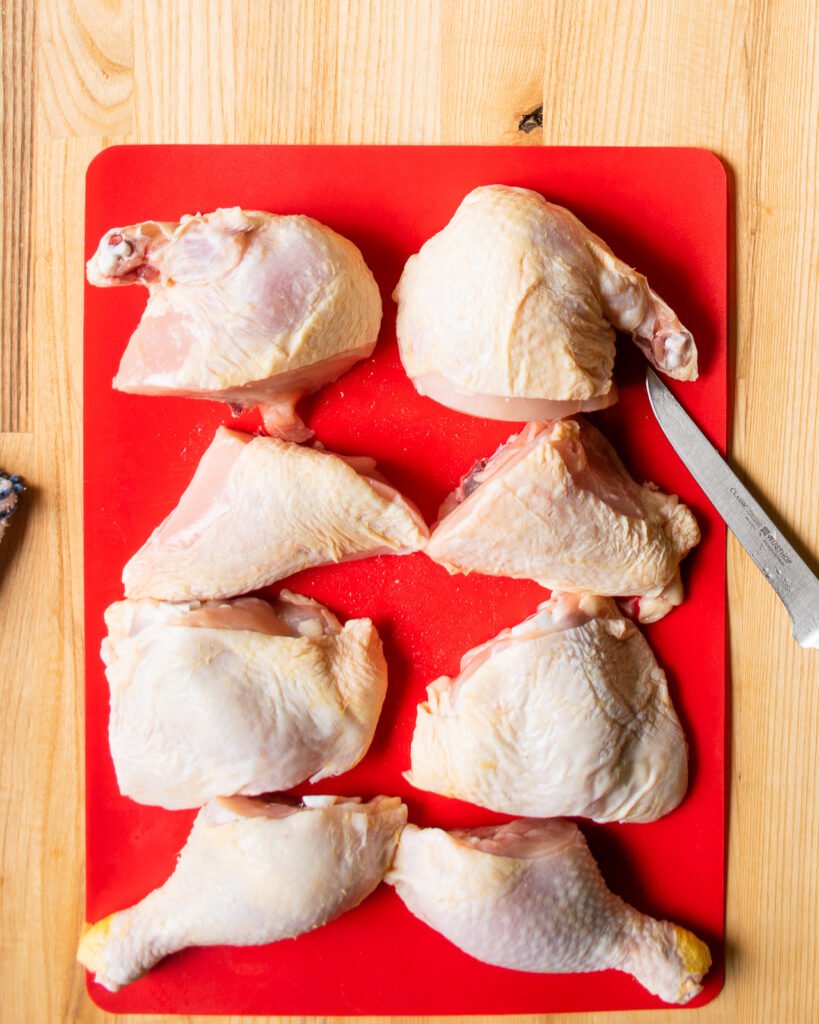 And there you have it! You’ve just leaned how to cut up a whole chicken, saved yourself some money and given yourself a new skill, plus the ability to make delicious bone broth after two more sessions of breaking down chickens. By that time, you’ll be an expert!

Grilled Huli Huli Chicken is a moist and juicy Hawaiian chicken dish with a delicious marinade that gives a burst...
View Recipe

Chicken Cacciatore is a classic winter comfort meal. Cacciatore means hunter, so this stew is "in the style of the...
View Recipe

Chicken Fricassée is a pretty dish that usually has a Fall feeling to it. By adding a few ingredients (asparagus,...
View Recipe