This is the chocolate bark that you see around cookie trays at Christmas time... at least you hope to! It's easy to make, but since there are only four ingredients make sure you get the best quality ingredients possible.

While white chocolate peppermint bark has become the traditional bark that you see at the holidays, there are many different varieties of bark that you can make. You can swirl two different chocolates together, you can add nuts, you can add dried fruit, you can even layer it with a layer of brittle as I did in my first cookbook, Comfortable in the Kitchen. (you can see some of those different barks in the photo below) The basic premise is always the same – melt the chocolate and layer it onto a cookie sheet, let it cool and break it apart. The trick to making bark is to melt the chocolate properly.

In a perfect world (or a chocolate factory), chocolate is tempered before being made into chocolate bark. Tempering is a process that keeps the chocolate shiny and retains its snap. It requires heating the chocolate to a certain temperature (115˚ F for dark chocolate; 110˚F for milk and white chocolate), cooling it to below 82˚F and then heating it again, but only to 88˚ to 91˚F and holding it there. That’s a lot to pay attention to, and makes chocolate bark more challenging than it needs to be. My recipes make the process much easier by doing what is called a “quick temper”. Reserving a quarter of the chocolate and adding it to the rest of the chocolate already in a melted state, brings the temperature down to roughly the right degree. The result is a bark that breaks neatly and has some shine to it.

Occasionally, chocolate can bloom, or look like it has a white dust all over it. This can happen when chocolate has not been properly tempered, or if the chocolate goes through temperature changes (into the refrigerator, out of the refrigerator, etc.) This does not affect the taste of the bark, but does affect the appearance. For this reason, make chocolate bark at most a day or two before you want to serve it. You wouldn’t be able to resist it for much longer than that anyway! 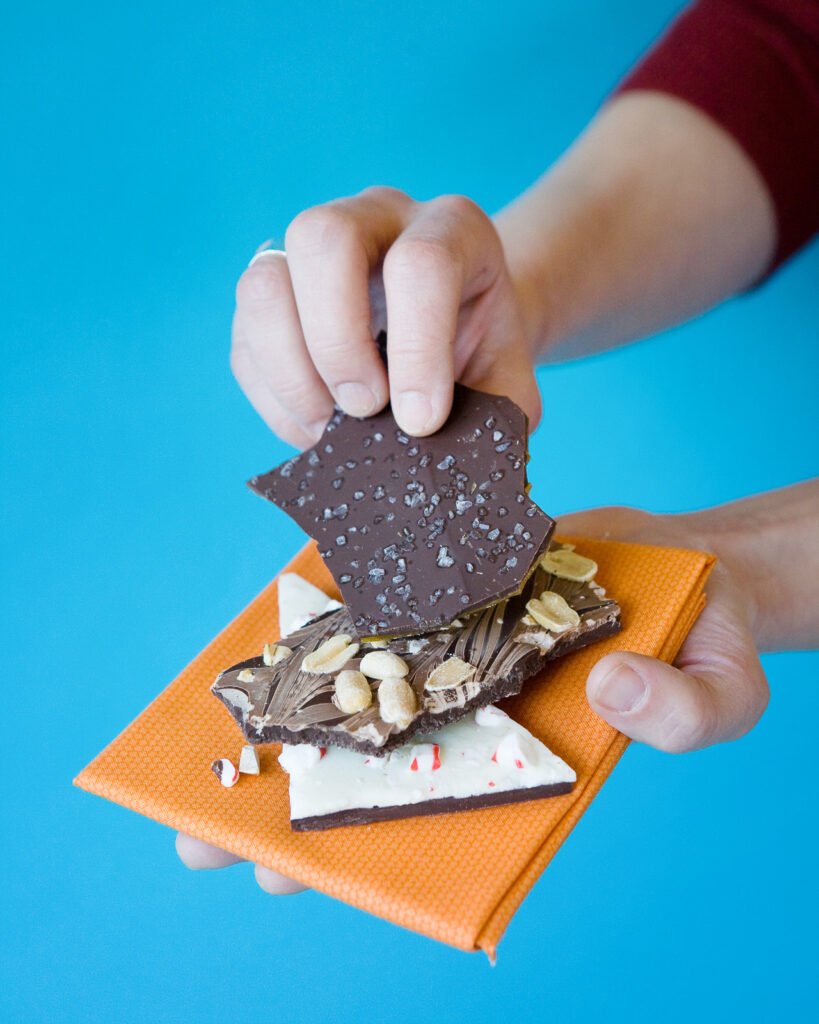 Hello! All photos and content are copyright protected. Please do not use our photos without prior written permission. If you’ve made this recipe and would like to share it with your friends, please link back to White Chocolate Peppermint Bark on Blue Jean Chef. Thank you!