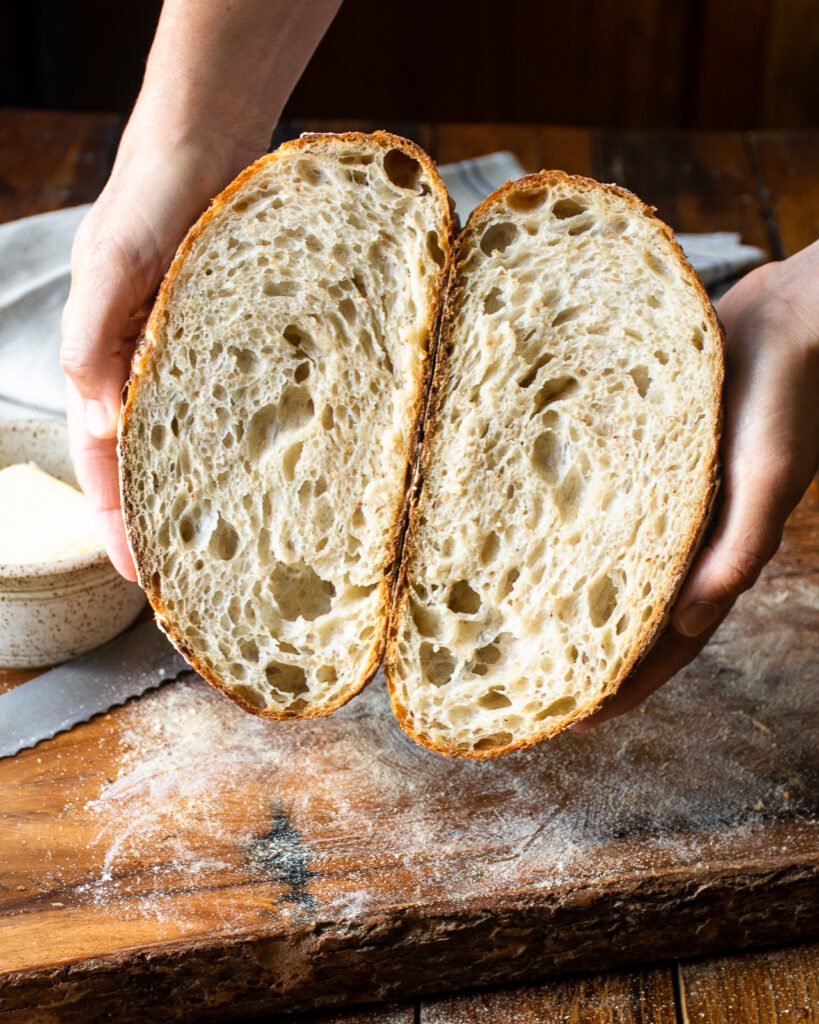 I truly believe this. The whole notion that you can mix flour, water and salt together and get something as beautiful as sourdough bread can only be explained by magic. Or… well, science I suppose. Still, every time I make a loaf of sourdough, I feel like a magician and if you have the time and energy to devote to it, I think you’ll feel exactly the same way.

Sourdough bread has been made for years around the world and all recipes for a plain sourdough bread are roughly the same. No-one has a copyright on sourdough bread. I learned most of what I know, however, from the Tartine Bakery and need to give them credit for my version of the classic. I have adapted their bread recipe and techniques for this recipe, adding some imperial measurements and making just one loaf at a time. 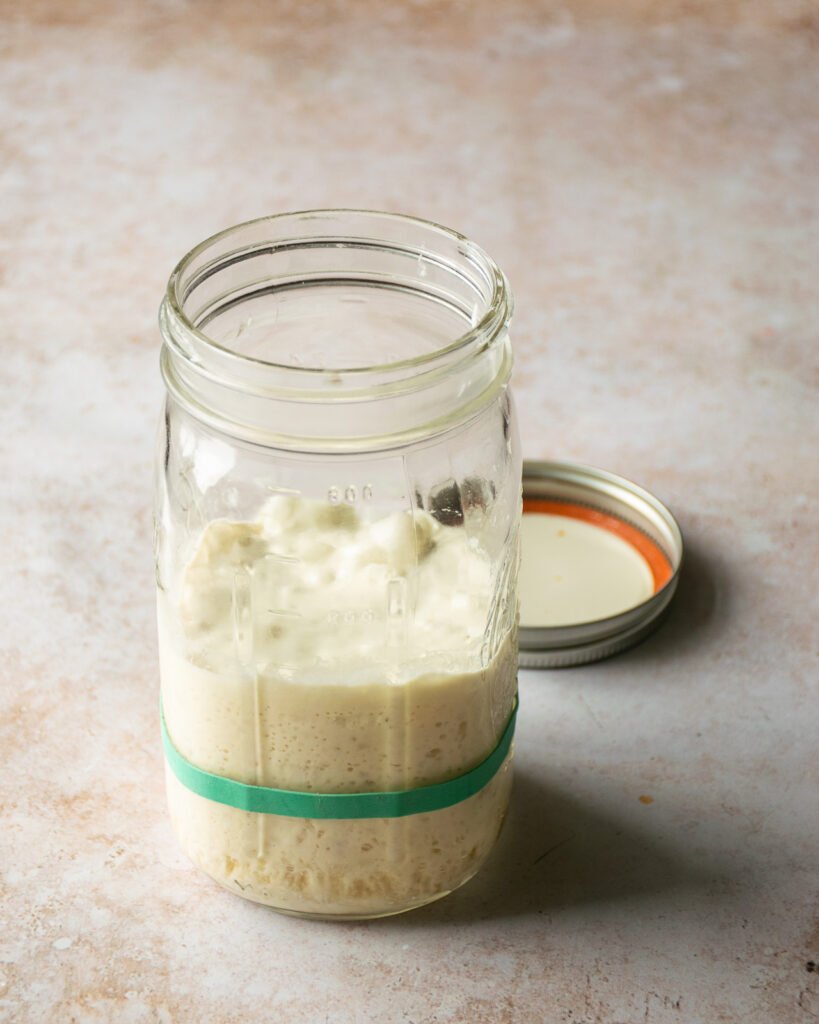 Let’s start at the very beginning, and that beginning is a starter. (confusing?) Most homemade bread recipes start by adding yeast to flour and water, along with perhaps a couple of other ingredients, but what makes sourdough different from most bread is that it uses a sourdough starter instead of store-bought yeast. It’s the sourdough starter – a combination of flour and water that traps wild yeasts and bacteria from the air around you – that gives flavor and rise to sourdough bread. You can buy sourdough starters from some well known bakeries like King Arthur Flour, or you might be lucky enough to have a friend give you some of their starter. But you can also make your own starter from scratch and it’s not difficult at all. It just takes a couple of weeks. Learn all about it in the BJC Cooking School here. 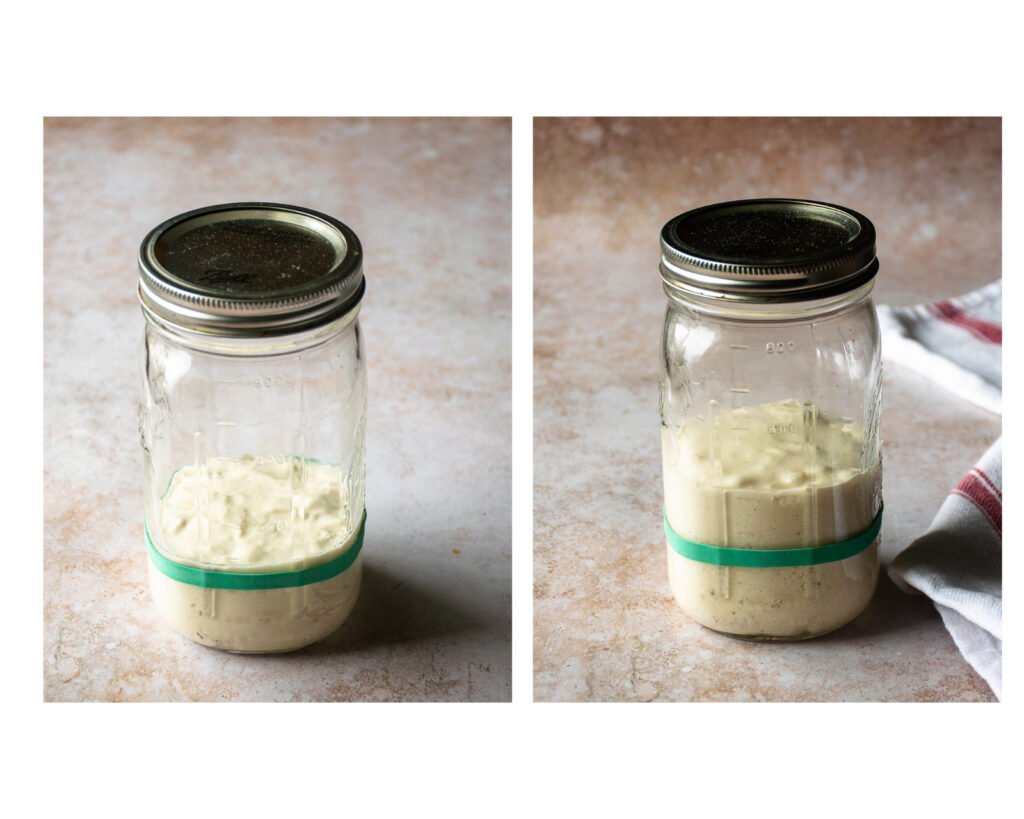 Once you have your starter living happily on your counter or in your fridge, you’re ready to make the bread. First, to help develop flavor, we make what is called a leaven. A leaven is basically the same thing as a starter – it’s a mixture of starter, flour and water and it is used to pre-ferment the dough, giving it more flavor. I always make a leaven before making my dough because my starter lives in my fridge and needs a little boost at room temperature to wake up before being asked to do a lot of work in a full blown dough. To make the leaven, you combine some starter, flour and 80ºF water in a jar and let it rise for at least 6 hours, or even overnight. You’ll know when the leaven is ready to use because a little piece of it will float in water. I either make my leaven the night before I intend to mix my bread, or at the crack of dawn the same day. 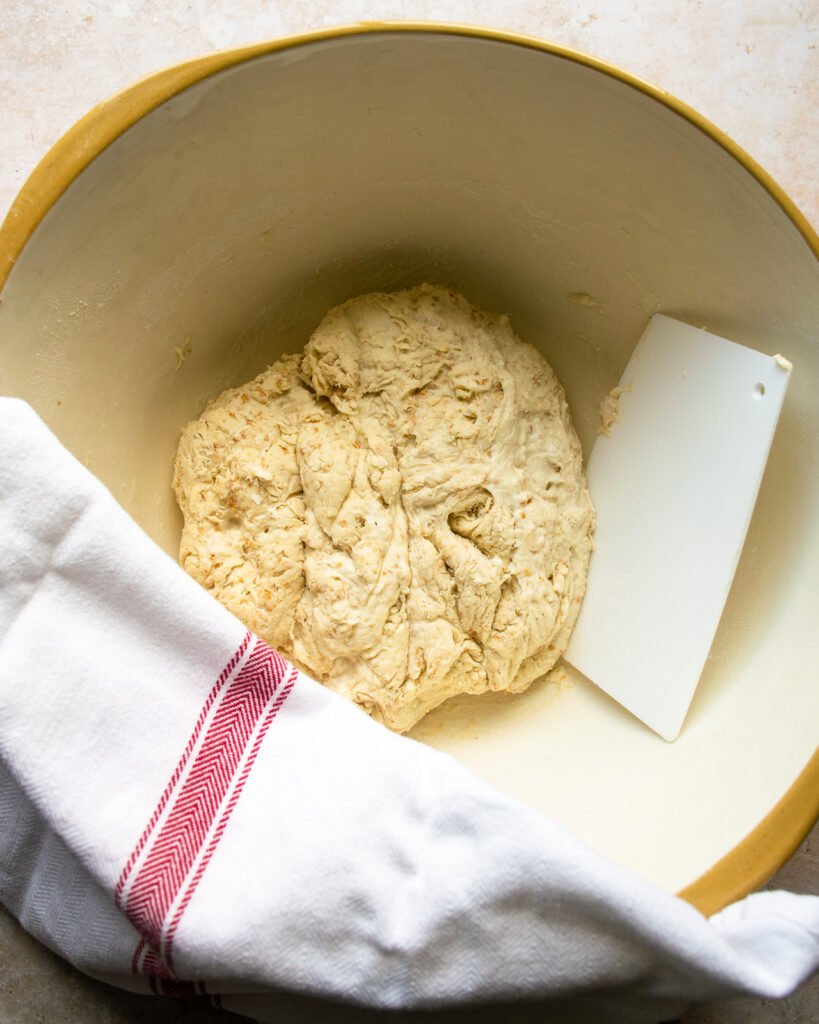 There’s no real kneading of dough in this recipe. You just mix the leaven with more water and flour and combine everything until there is no dry flour remaining in the bowl. Then, you let the dough rest for 30 or 40 minutes before adding the last remaining ingredient. 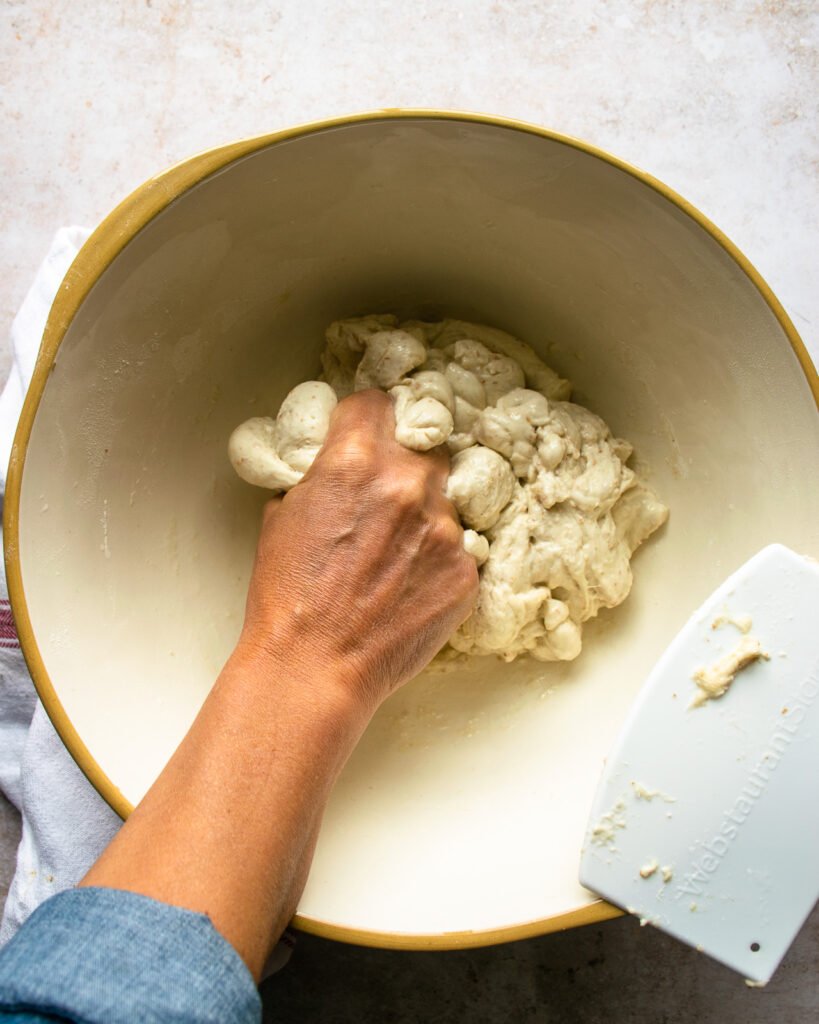 Salt is critical to so many things, but especially to bread. Bread without salt is like the sky without the sun. It’s sad. The salt is not added to the dough when it is first mixed because salt inhibits yeast activity. So, the dough and yeast get a head start and then we add the salt. I like to dissolve the salt in a little more water and then squeeze the water into the dough until it is combined. It can look scrappy at first, but then by pulling the dough over on itself, turning the dough 90º each time you turn it over, it will become a uniform blob of dough. It doesn’t need to look pretty at this stage. (see photo below) 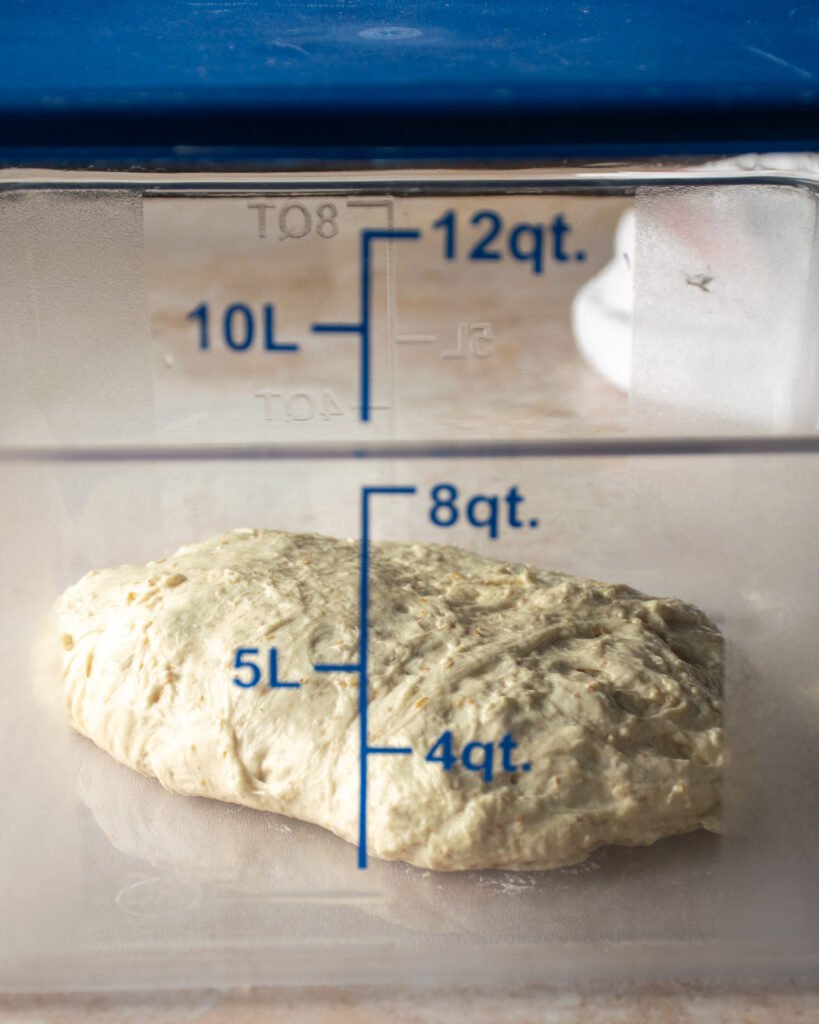 Letting the Dough Rise and Ferment

Place your mixed dough into a lidded container or covered bowl for the next stage: bulk fermentation or rising time. This is really unattended time. You just get to watch and feel the dough change, but a lot is happening inside. The yeast is enjoying a perfect environment and reproducing and emitting gases to help the dough rise and develop flavor. I like to use a clear container so I can see how it’s doing. It will change over time, as you’ll discover. 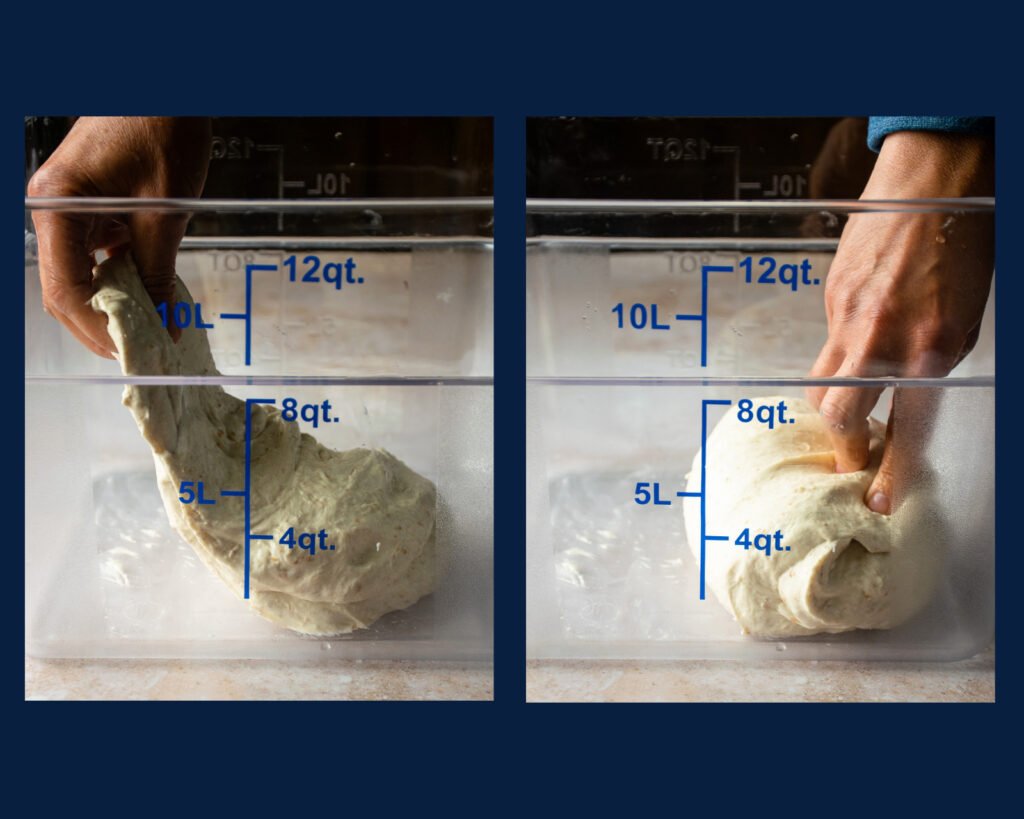 While there is no need to knead, you do have to turn the dough over on itself every 30 minutes or so while it rises. This just involves grabbing one side of the dough and folding it over on itself. Then, turn the container or bowl 90º and fold it again. Fold all four edges of the dough this way and you’ve completed one “turn”. 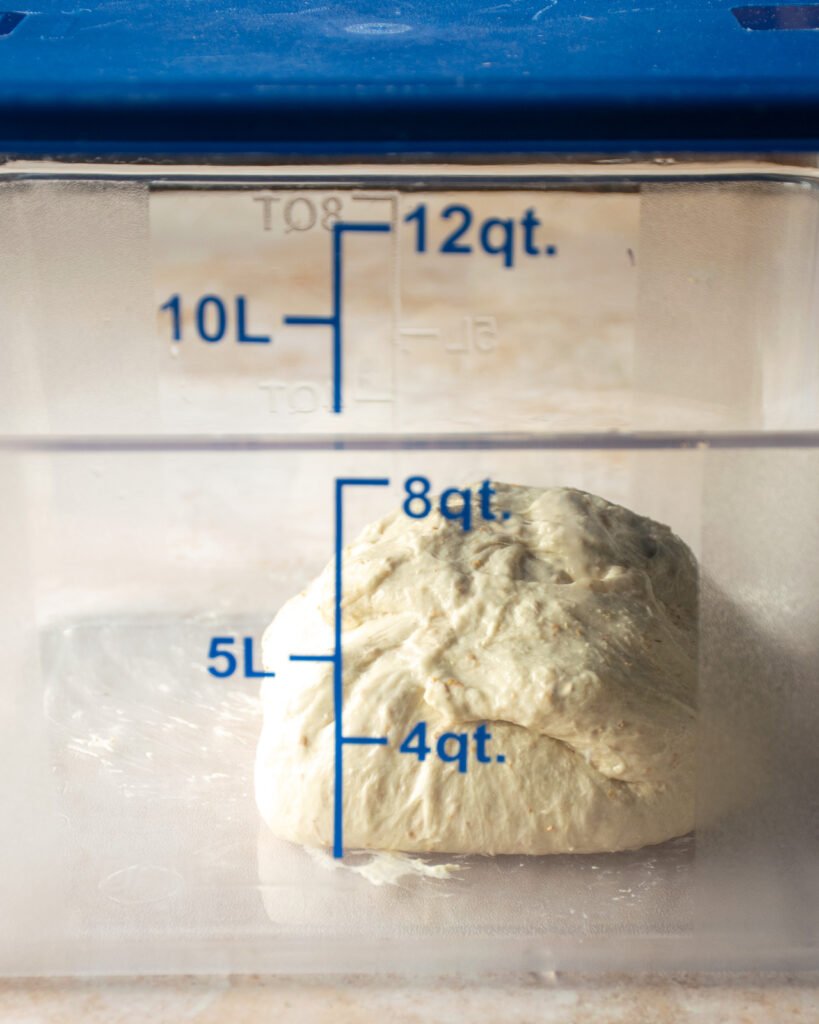 As you turn the dough each time, you’ll notice it getting smoother and bigger, lighter and fluffier. This is the yeast doing its thing – reproducing and emitting gases which helps the dough rise. As the dough becomes lighter, turn it more gently each time or pick it up with two hands in the middle and let the ends fold under the dough. 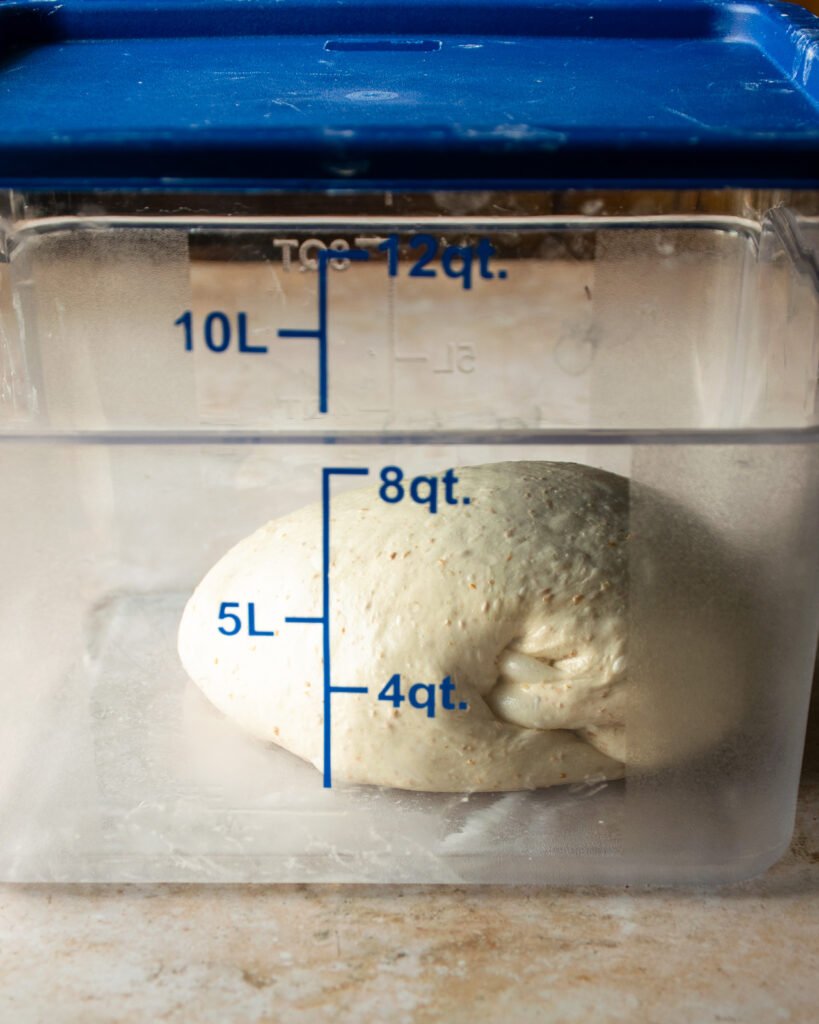 The time it takes for the dough to rise depends on your room temperature. A warmer environment means a shorter fermentation (or rising) period. If your room is cooler, the dough will still rise, but it will take longer to do so. I’ve had a rising time of as little as 3 hours, or as long as 7 hours. Know, however, that faster does not mean better. The longer it takes for the dough to rise, the more time it has to ferment which means the more flavor it will have. After several hours, the dough will have changed completely. It should have a smoother surface and feel very light and airy.

Now comes the time to shape the dough. There are two stages to this. First, dump the dough out onto a floured surface. Then, gather the edges of the dough up to the center (like a beggar’s purse), flip the dough over and use a bench scraper to pull the dough towards you a few times, tucking the edges under and shaping the dough into a ball. In this stage, we’re trying to stretch the top of the dough a little while we tuck the bottom of the dough under (like tucking in sheets on a bed), building tension in the dough. This can take a little practice, but when you’re finished with this stage, the dough should just look like a round boule. Let it sit for 20 minutes because it’s just worked out and needs a rest. 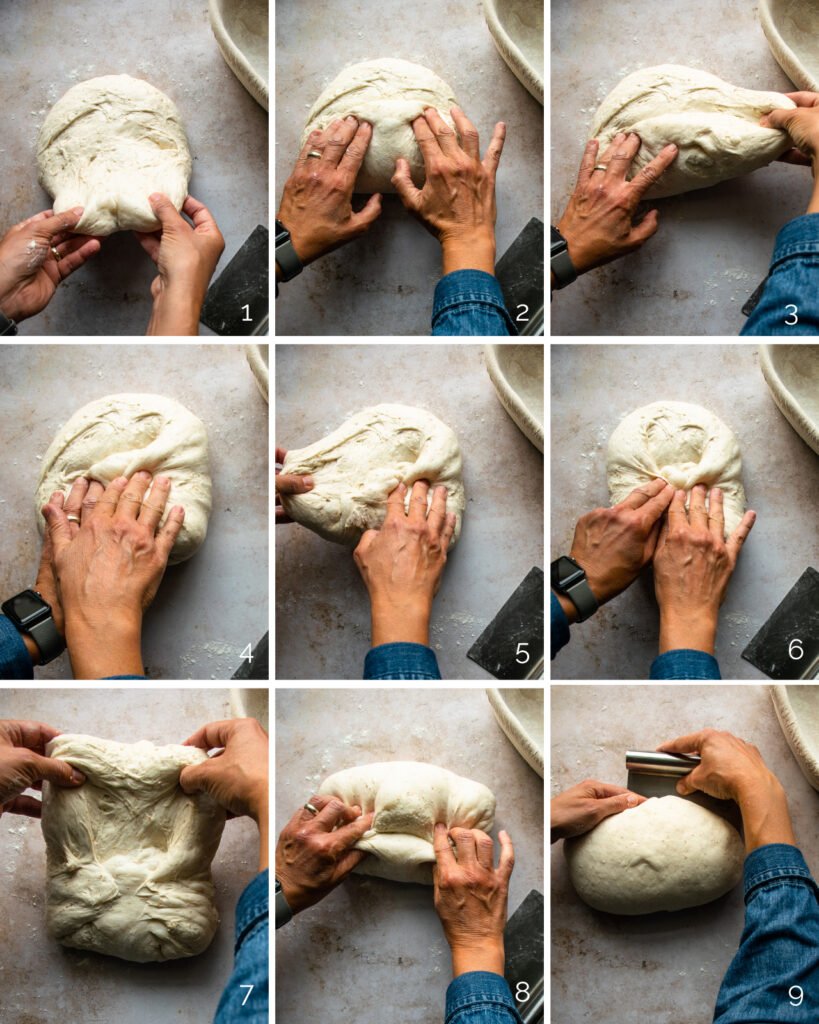 The Final Shaping: Folding the Dough

The second stage of shaping requires a series of folds which I’ve tried to show you above. Flour the surface of the rounded and rested boule and flip it over onto the counter so the floured side is down. It should be relaxed enough that it oozes and flattens a little. Fold the bottom of the dough up away from you and fold it on itself. Then, pull one side of the dough out and fold it in towards the center. Repeat with the other side of the dough. Finally, fold the top of the dough down to the middle and flip the dough back over. Use your board scraper to tighten the dough again, pulling it towards yourself. 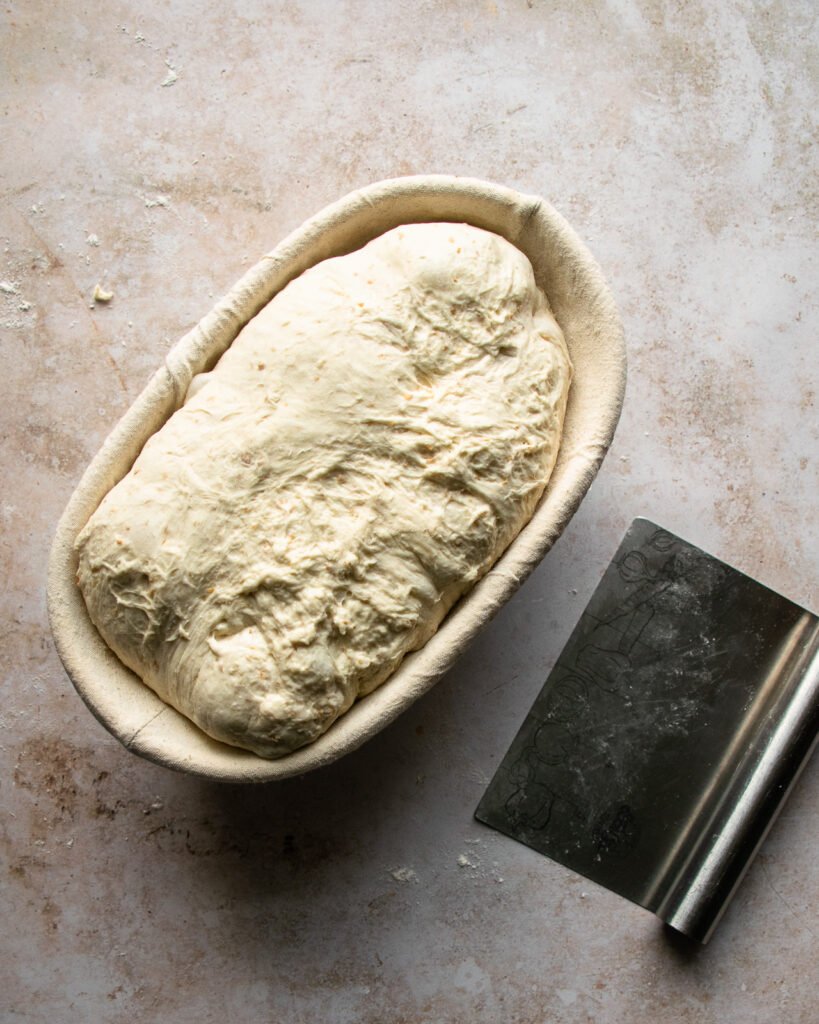 That’s a big workout for a dough ball, so it now needs a significant rest and recovery period. You’ll need a vessel to hold the dough in shape for this rest. You could use a bowl lined with a tea towel, or a banneton like the one above – a rattan proofing basket. Dust the banneton with rice flour to help prevent the dough from sticking. Place the bread, seam side up into the banneton, pop the banneton into a food safe plastic bag and then transfer the dough to the refrigerator. You’ve done enough work for today. 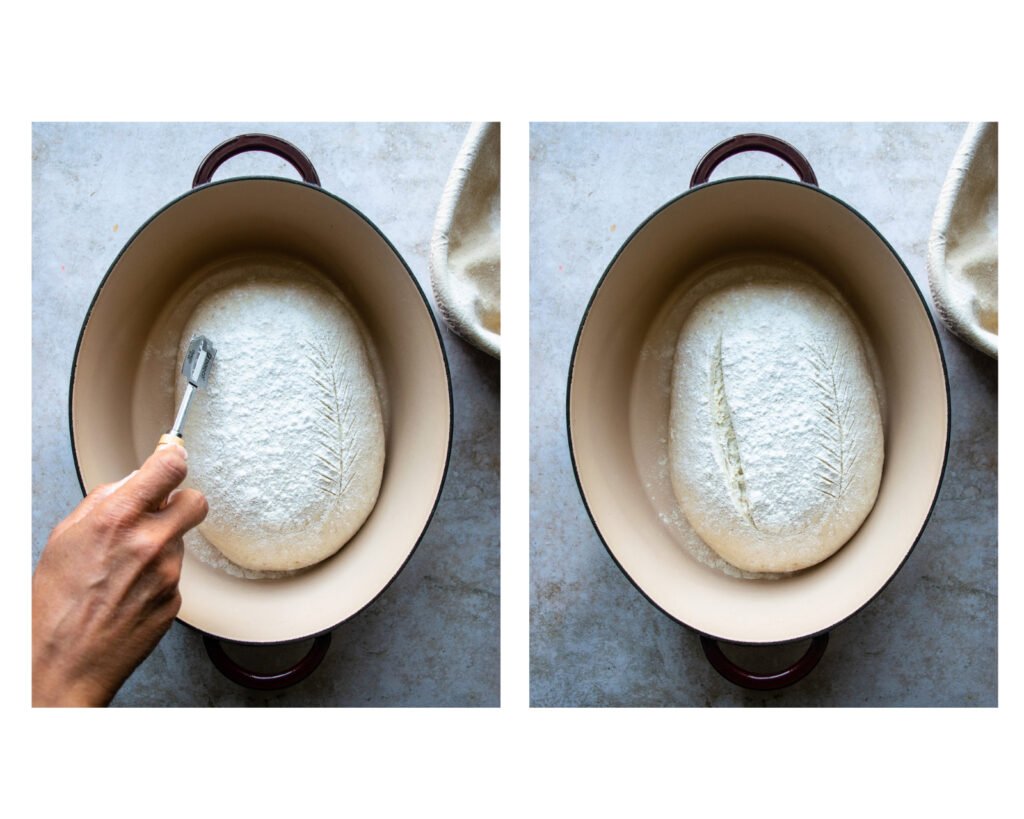 Bake day is one of my favorite days. I wake up excited and the first thing I do is take my sourdough loaf out of the fridge and pre-heat a cast iron pot in the oven to 500ºF. I do this even before coffee! Once the oven and pan has pre-heated, it’s time to bake. Carefully transfer the dough to the (smoking hot) cast iron pot by carefully inverting it into the pot. Then, it’s important to slash the dough. We slash the dough because there is air in the dough that needs to escape. If we don’t give it a direct route out of the bread, it will make its own way out and form an ugly crack. You can slash the dough with a cross in the center, straight down the middle, along the side or wherever you like. You can also make a little pattern in the dough with shallow cuts, but you’ll need a big slash too. If you do decide to make a pattern in the dough, it’s important to dust it with flour first. The flour on the surface of the dough outlines your pattern when the dough rises, allowing the pattern to really shine.

Reduce the heat to 450ºF and bake the sourdough with the lid on for 20 minutes. Then remove the lid for 20 minutes until the dough takes on a dark color. You can let the dough cool a little in your cast iron pot, or you can remove it to a cooling rack (carefully because it is HOT). 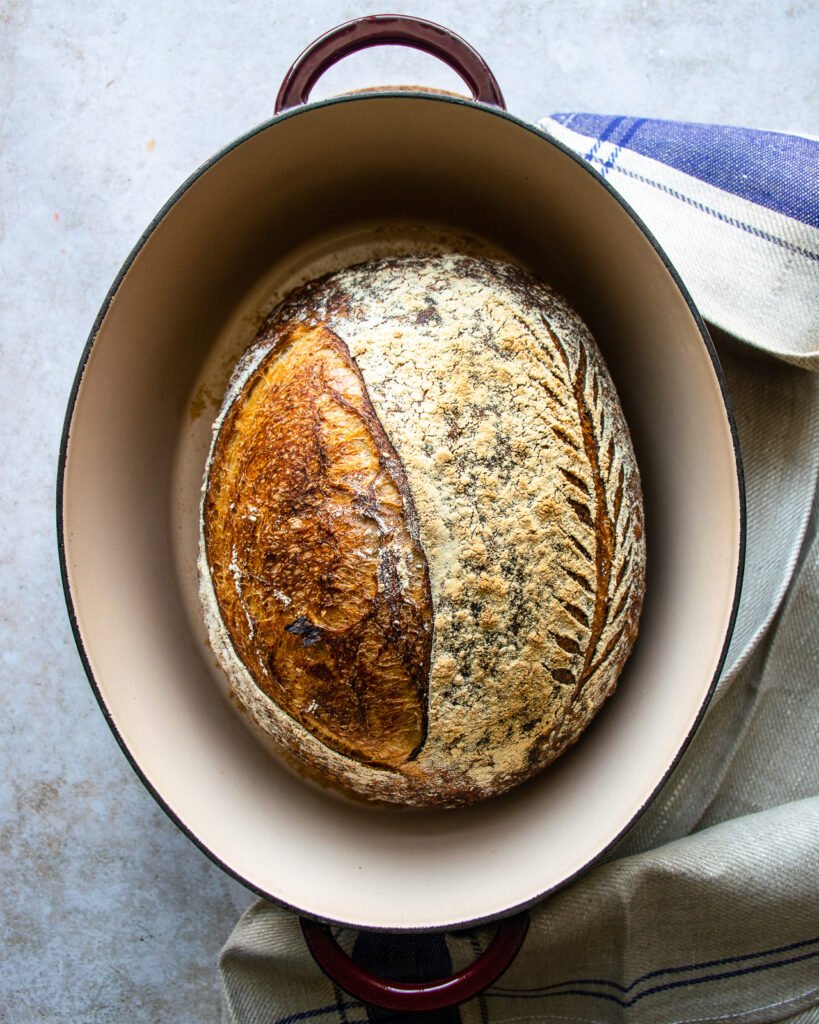 Look what you did! Aren’t you proud? I’ve baked more loaves of sourdough than I can count, but I’m proud of myself every single time. Each loaf is different, some more beautiful than the others, but they all taste fantastic and come with great benefits. Sourdough is more flavorful than other breads and has a really great chewy texture, but it’s also easier to digest and more nutritious than regular bread. You can learn more about the nutritional benefits of sourdough here. 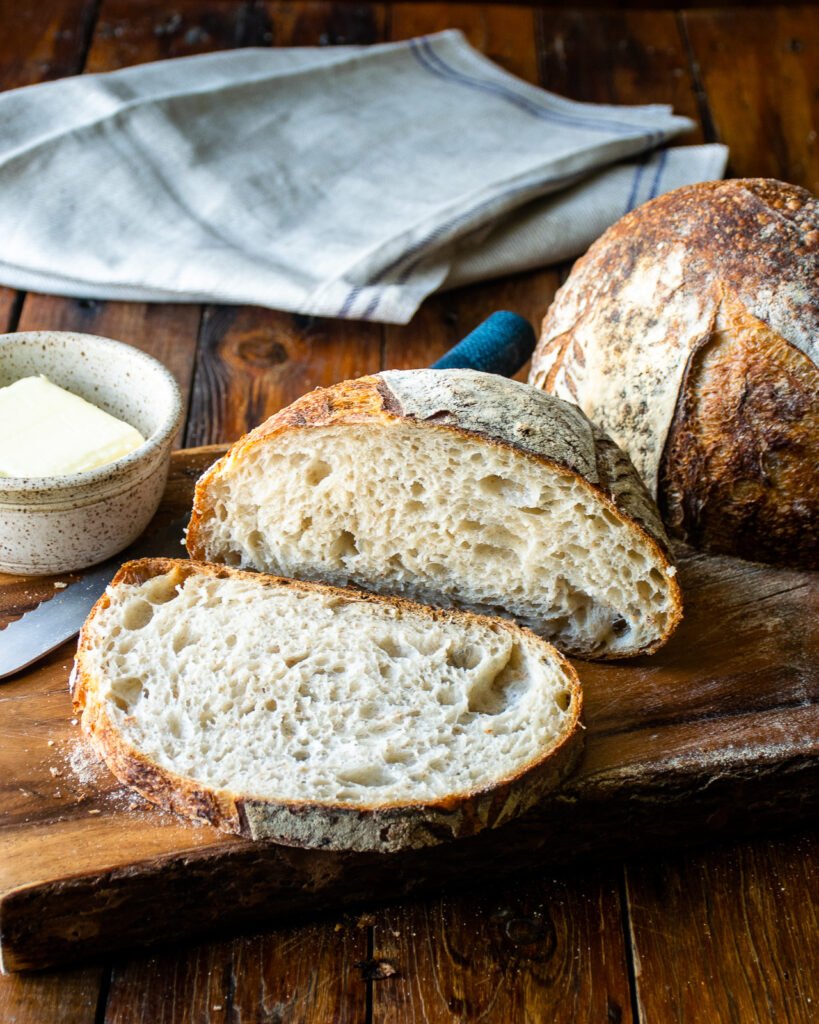 How to Store Sourdough

One of my favorite features of sourdough, however, is that it lasts longer than other homemade breads. I leave my loaf out on the counter overnight on the first night. If I’ve cut into it, I just place the cut side down on the cutting board. I like the crust better the second day as it hardens a little. If the dough is still around on day 3, I’ll put it into a plastic bag at that point. Sourdough keeps easily for up to a week and half. As it ages, it’s better toasted than raw, but delicious all the same. 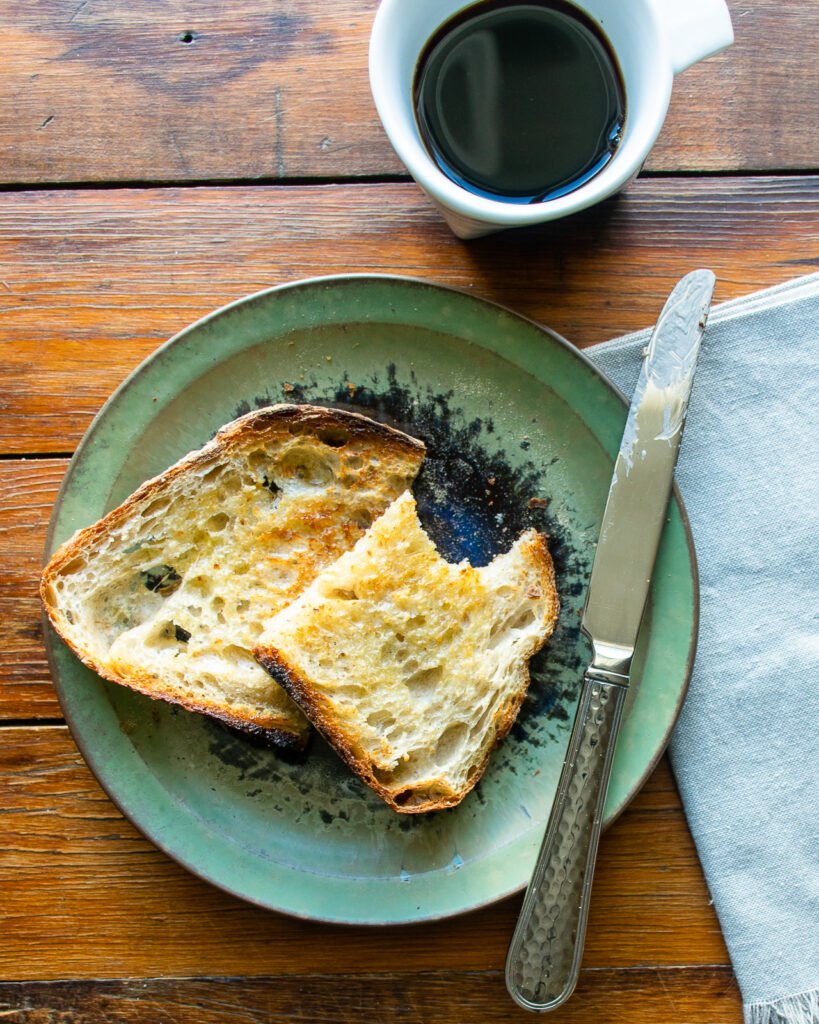 Are you up for it?

So, clearly, making sourdough bread is a commitment, but if you like baking for joy or enjoy the science of baking, few things are more gratifying to make. It’s magic after all.

How to Make a Sourdough Starter

Making your own sourdough starter is a little like magic. You need very little - just a few tools, some...View Technique

Hello! All photos and content are copyright protected. Please do not use our photos without prior written permission. If you’ve made this recipe and would like to share it with your friends, please link back to Sourdough Bread on Blue Jean Chef. Thank you!