Jim Lahey's no knead bread is one of those recipes that makes you want to slap your head - it's so easy and the end result is so so SO beautiful.

It’s frustrating to think that for years we believed that bread that looked this good was something you’d find only in an artisanal bakery, and definitely not something you could make at home, let alone by someone with only a 5-minute attention span. And yet, there it is – simplicity sitting right under our noses. No need for kneading. 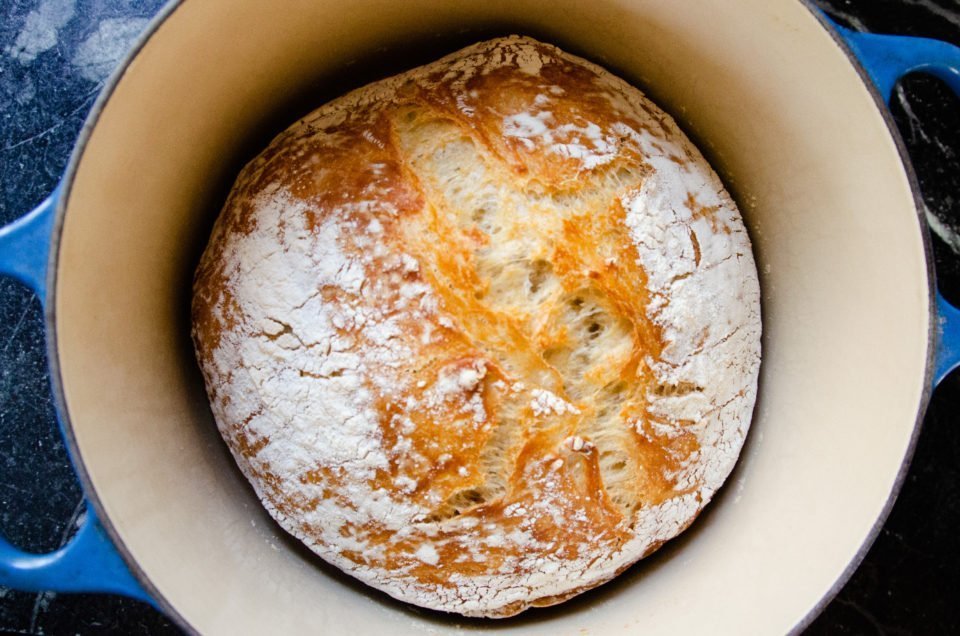 Jim Lahey, the owner and baker of Sullivan Street Bakery, produces breads for over 300 restaurants in New York and in 2006 the New York Times first published Jim’s method of making bread without kneading it – No Knead Bread. This went against centuries of tradition where kneading the bread dough was deemed critical to developing the gluten in flour, which in turn was necessary to create a bread that would rise beautifully and hold its shape while having the loose airy crumb of artisan bread loaves. Jim figured out that a slow rise of a relatively wet dough created a more flavorful loaf – similar to those loaves he had eaten in Italy – and that the extra moisture in the dough would evaporate into steam in the oven, helping the dough to rise and the crust to crisp. 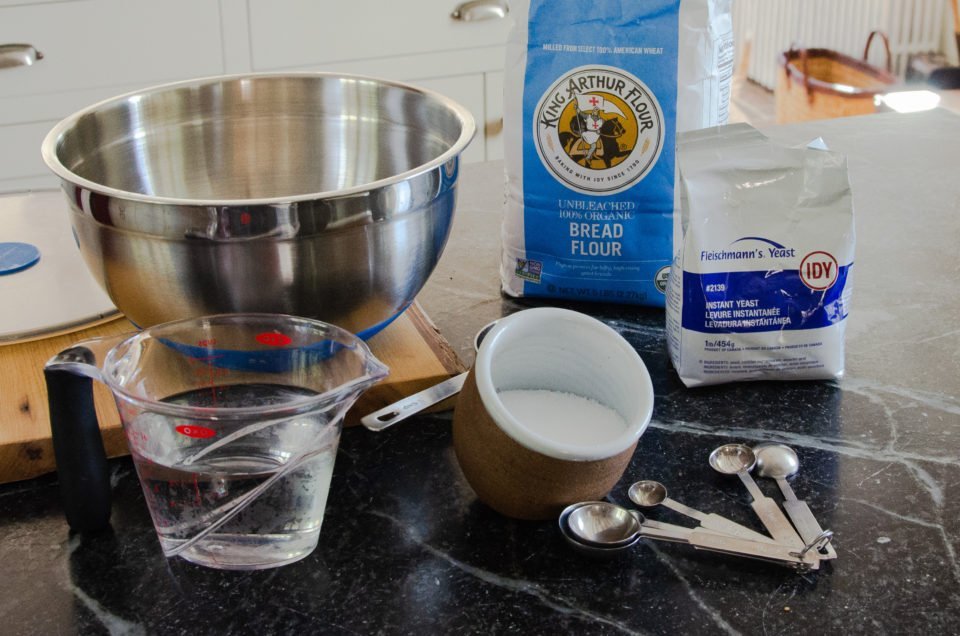 The no knead bread is baked in a cast iron Dutch oven which is pre-heated for 30 minutes along with the oven to 425ºF. The cast iron holds the high heat of the oven and turns into an oven in and of itself – an oven in an oven, so to speak. Topping the Dutch oven with a lid allows the baker to trap that steam being released by the bread and helps with the rise – a more intense bake than just baking in an oven on a stone.

Of course, this is the only tricky part of the recipe – getting the bread into the smoking hot cast iron Dutch oven without burning yourself or deflating the dough too much. One trick is to use the parchment paper that the bread is resting on as a transfer mechanism, placing it into the cast iron pot along with the bread dough. The downside of this trick is that I’ve found that the paper traps a little moisture on the bottom of the loaf, which ends up less crusty, but you can always crisp the bottom of the loaf back up in the oven after it has baked.

The other challenge to the recipe is handling the dough when it is so wet and sticky. The answer here is a little counter-intuitive – you want wet hands. Before you turn the dough out onto a well-floured surface, wet your hands so that the dough can’t stick to you. It works every time.

Finally, be sure to flour the surfaces of the bread well. Really well. I use a flour duster for this, which gives me an even coating of flour. The flour helps make the transfer of the dough from countertop to cast iron much easier and it creates a pretty pattern on top of the loaf. You can’t really avoid getting flour on your countertops (or floor.. or face for that matter) with this recipe, so just let it happen and clean it up later. Besides, what excellent artisanal bakery doesn’t have flour on the flour and counters?

If you like this white version of Jim Lahey’s No Knead Bread, try my whole wheat version here.

Hello! All photos and content are copyright protected. Please do not use our photos without prior written permission. If you’ve made this recipe and would like to share it with your friends, please link back to No Knead Bread on Blue Jean Chef. Thank you!