When the season comes around, it's fun to roast chestnuts to have on hand for savory and sweet recipes. Contrary to popular opinion, however, you don't need an "open fire". You can roast chestnuts easily in your oven or your air fryer.

Chestnuts are in season from mid-September through January, making them a very seasonal ingredient for both Canadian and American Thanksgiving menus, as well as many Christmas holiday meals. Indeed, I think most of us only really know about chestnuts from “The Christmas Song” by Robert Wells and Mel Tormé (also known as “Chestnuts Roasting on an Open Fire” or “Merry Christmas to You”), so of course chestnuts make us think of the holidays. While many people buy chestnuts that have already been roasted, shelled, peeled and cryovac’d, I have to say that roasting your own chestnuts will give you a far superior ingredient to put in whatever recipe you’re making, from savory braised dishes, to Thanksgiving stuffing, to sweet chestnut cream or pudding. Plus, roasting chestnuts yourself will definitely make you feel like you’re taking part in the holiday season. 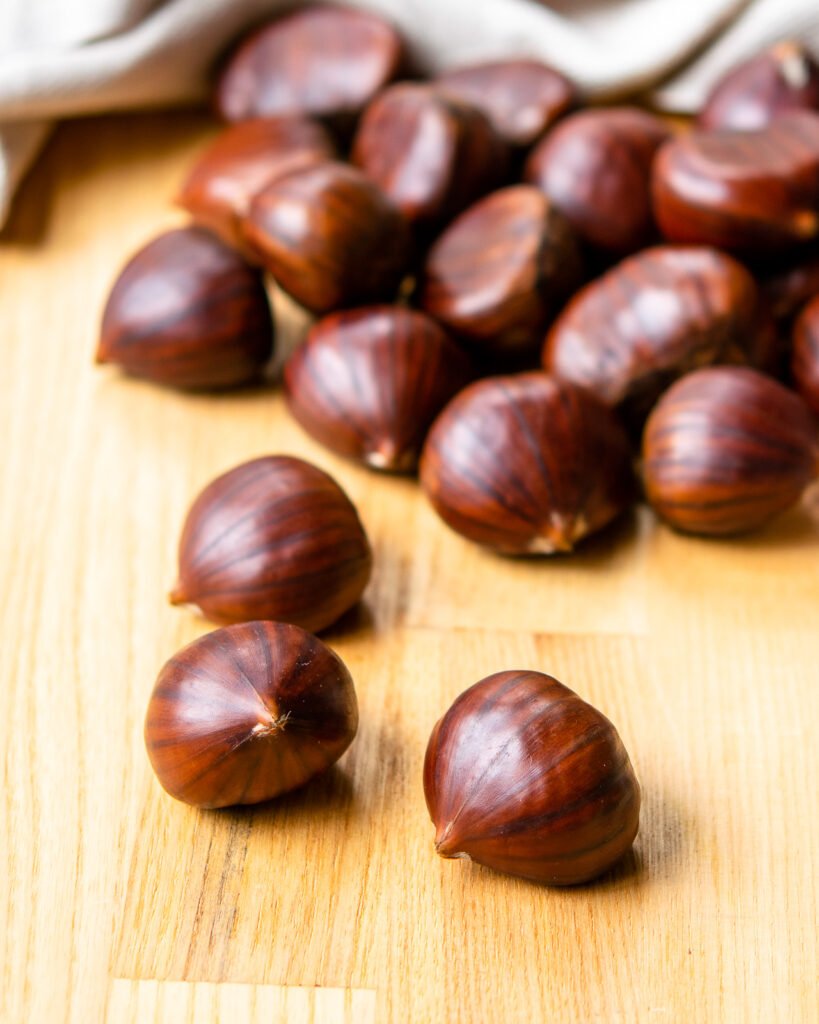 How to Buy and Store Chestnuts

The first thing you need to know is that chestnuts are a little like pistachios – in the same way that you can’t get every single pistachio open, you can’t guarantee success with every single chestnut. There will always be some duds in the group. Some won’t peel easily and some might be black, hard or moldy. Just discard these nuts. Because you know this (now), always make sure you buy an extra half pound of chestnuts to make up for the duds. Once you’ve purchased your chestnuts, keep them covered and in the refrigerator. This way, they will last for two to three weeks. You can also freeze chestnuts before (or after) you roast them. 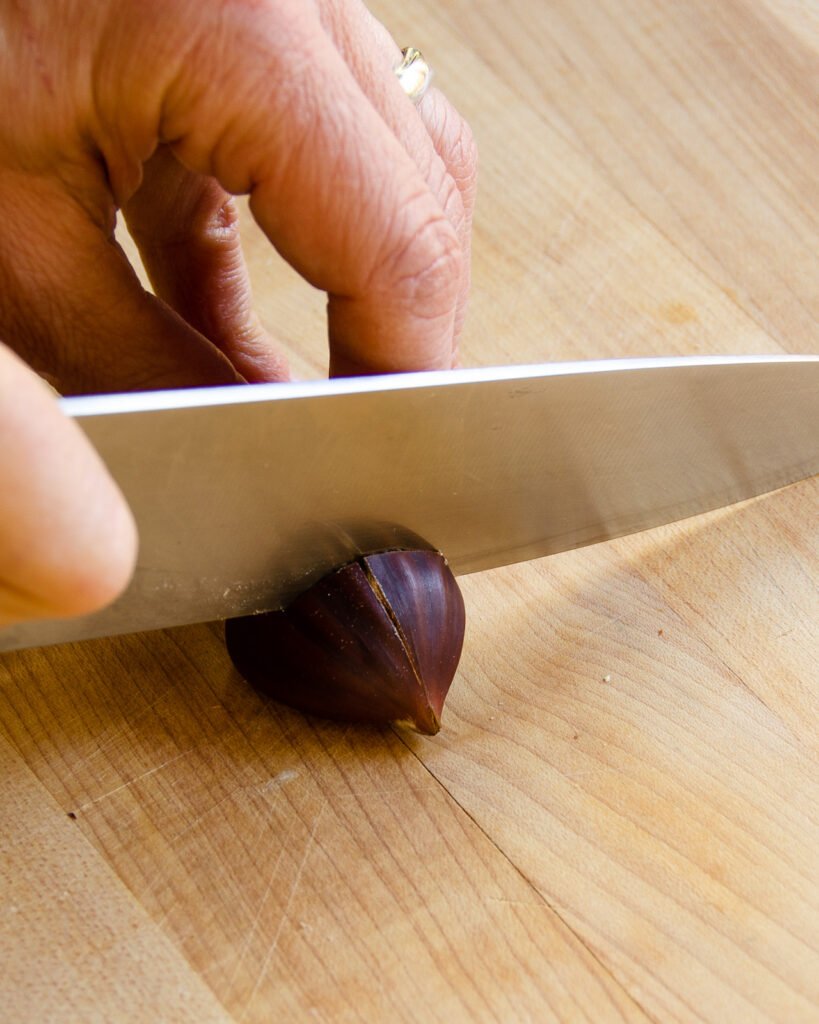 How to Roast Chestnuts

The first step in roasting chestnuts, whether you are using your oven or your air fryer, is to score them. Use a sharp knife or a serrated blade and cut an “X” right into the shell, making sure you go right through. This is actually easier than you think – while the shell is well… a shell, it’s not thick and it’s not super tough. 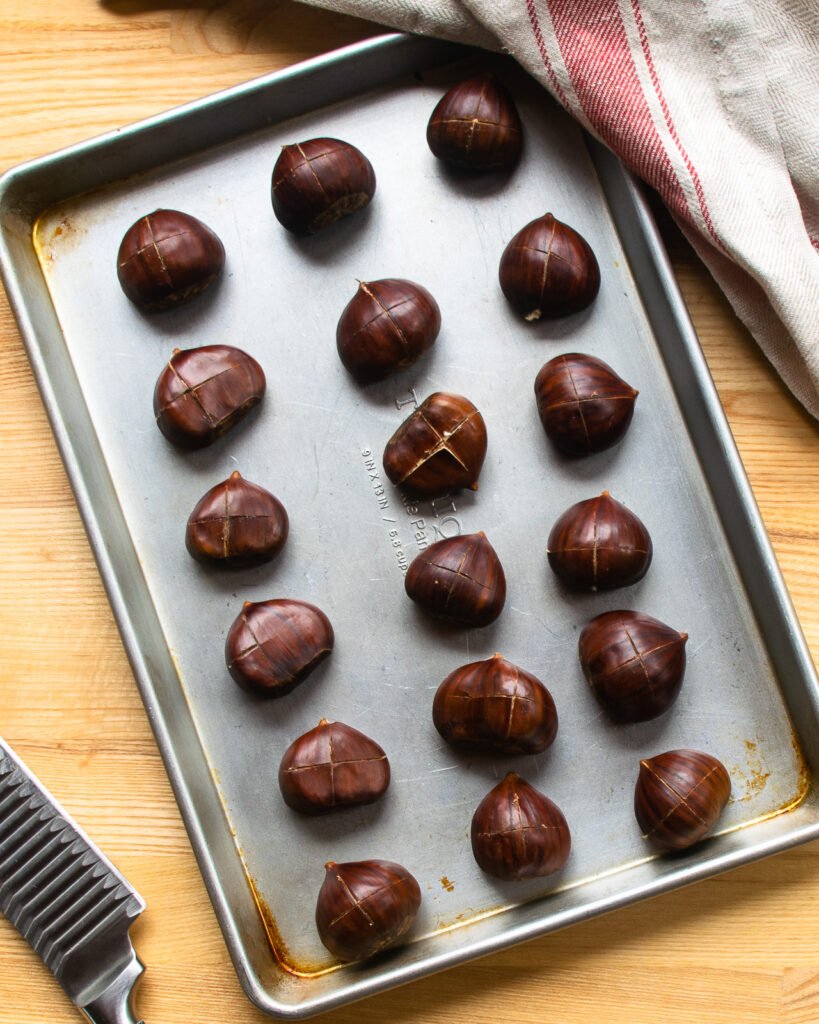 Then, transfer your scored chestnuts to the air fryer or to a baking tray and roast them until the shells peel back away from the nut. This step is sort of like making popcorn – you keep popping the corn until almost all the kernels have popped. With chestnuts, you want to continue roasting until almost all the nuts have peeled shells. Then, you need to let them cool. Once cool, the shells should remove quite easily. You still have work to do, however. Use a paring knife to help peel away the light brown inner skin that coats the chestnut. This can be a little finicky, but it’s part of the process. Live in the “now” and enjoy yourself. Sit at the counter, or ask a friend for some help and have a good chat while you peel. 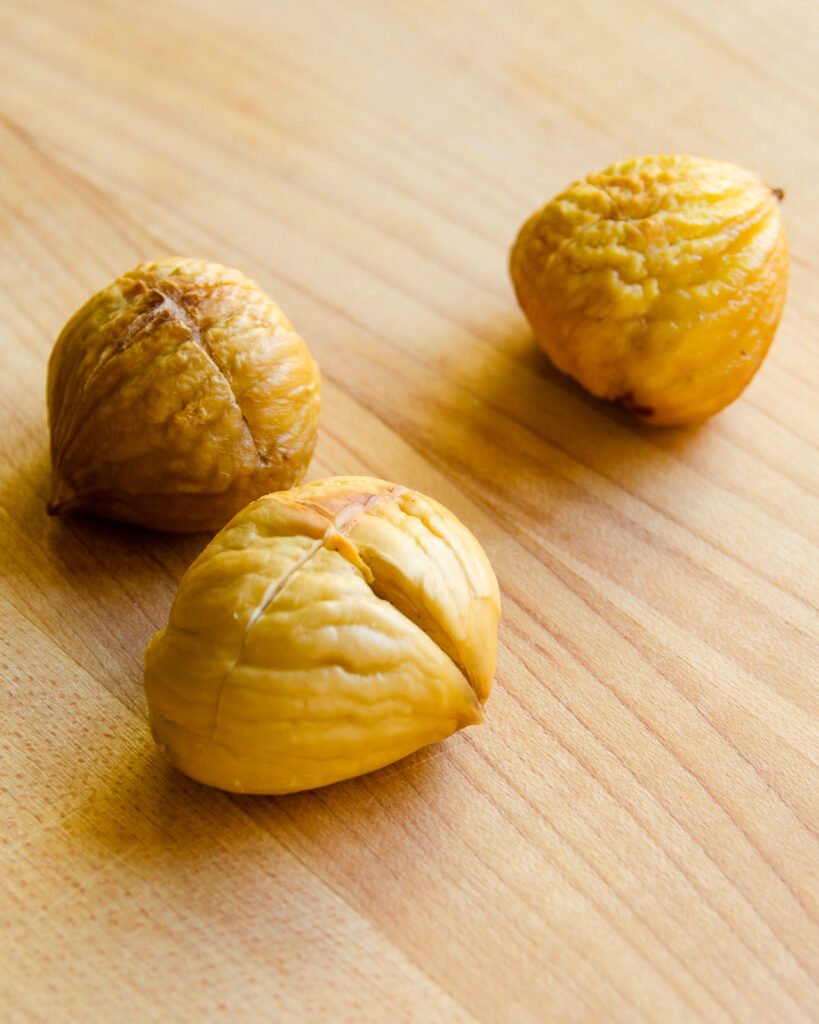 How to Use Roasted Chestnuts

There are recipes out there that instruct you to boil the chestnuts instead of roasting them. You can do this (score, boil for 10 to 15 minutes, keep them warm, dry, peel and rub off the inner skin with a towel), but the flavor is much milder than if you roast them. If you’re more inclined to boil the chestnuts, it might just be easier to purchase the pre-peeled chestnuts in that cryovac pack.

If you’re full of the holiday spirit and want to really live “The Christmas Song” or imagine yourself walking the streets of Manhattan in November or December,  pop the peeled chestnuts back into the air fryer for just a few minutes to warm them up and then toss them with a little olive oil and salt and enjoy them out of a paper cone. 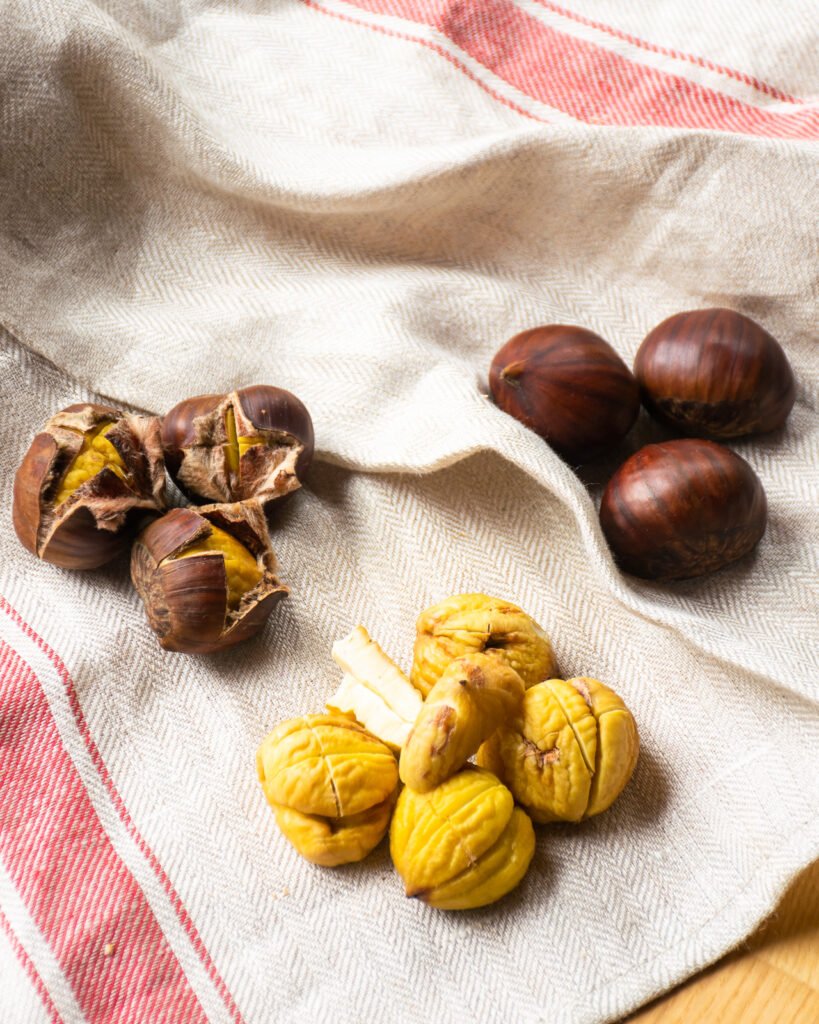 Hello! All photos and content are copyright protected. Please do not use our photos without prior written permission. If you’ve made this recipe and would like to share it with your friends, please link back to Air Fryer Roasted Chestnuts on Blue Jean Chef. Thank you!

Hello! All photos and content are copyright protected. Please do not use our photos without prior written permission. If you’ve made this recipe and would like to share it with your friends, please link back to Oven Roasted Chestnuts on Blue Jean Chef. Thank you!