This delicious chocolate cherry cheesecake is made in an air fryer (although you could absolutely bake it in the oven). The result is a mousse-like, creamy cake with absolutely no crack in the top. 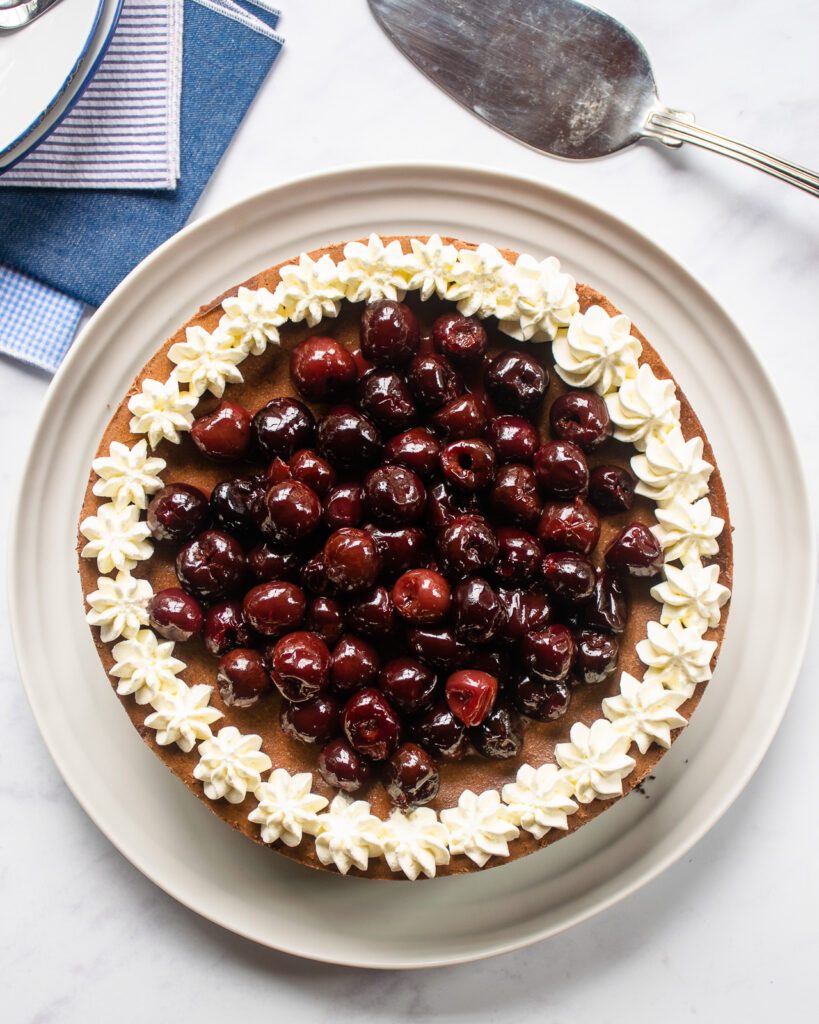 What is Black Forest Cheesecake?

Black Forest Cheesecake is a deliciously smooth and creamy chocolate cheesecake, topped with dark sweet cherries and whipped cream. It’s the combination of chocolate, boozy cherries and whipped cream that gives it the “Black Forest” moniker. The Black Forest is in Germany, and although this combination of flavors wasn’t named for the Black Forest itself, it was named for the famous cherry liqueur that comes from that area – Kirschwasser. The recipe below combines those great flavors, using Kirschwasser (or brandy if you can’t find the cherry liqueur), but differs from other cheesecake recipes in that it uses an air fryer to bake the cake. If you want to make this cheesecake in the oven, follow the instructions for the cheesecake batter as written below, but use these instructions for baking. 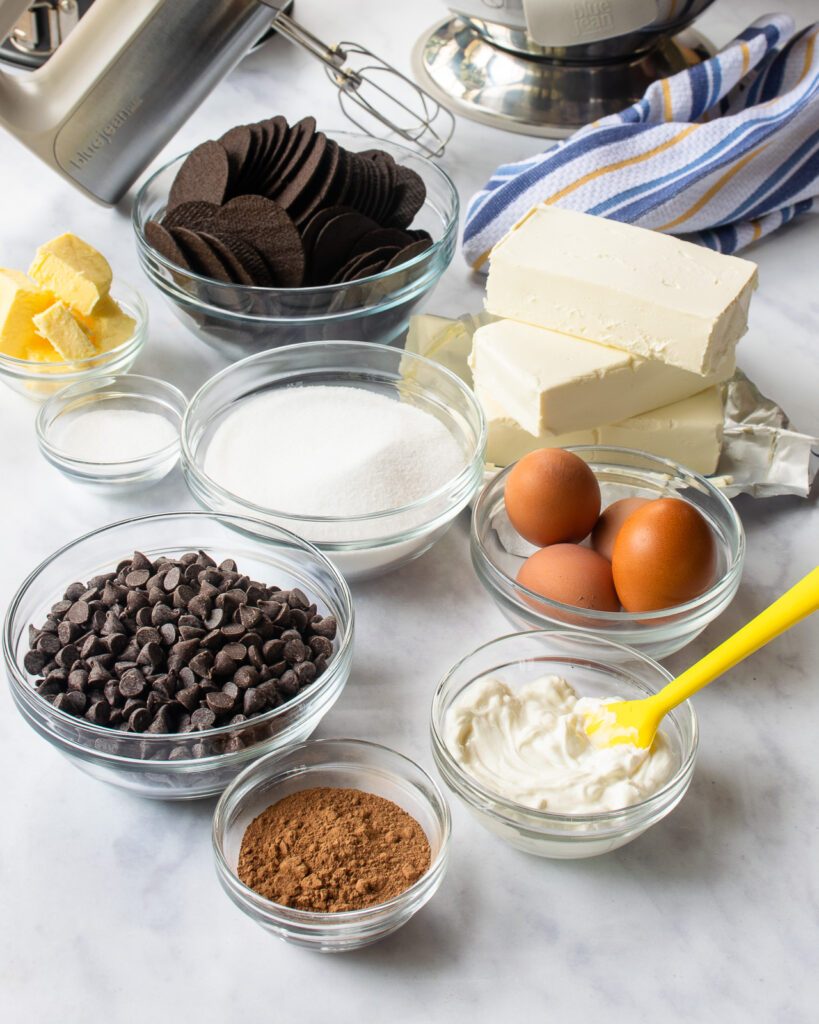 Despite what you may think, cheesecakes are one of the easiest desserts to make. The ingredients required are very basic and common. The most important thing to remember when getting your ingredients together is to make sure your cream cheese is at room temperature. Trying to beat the cream cheese when it is too cold will only bring frustration. Just let it come to room temperature an hour or two before you’re ready to start mixing the batter. 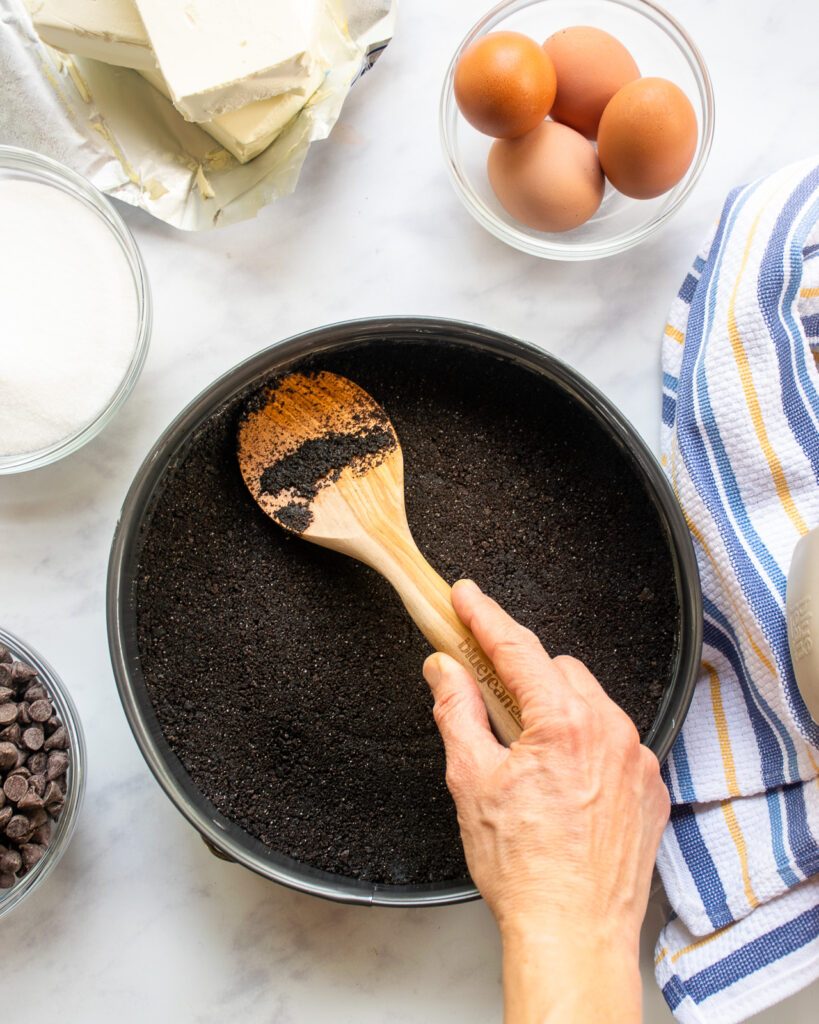 The hardest part of making this chocolate cheesecake crust is not snacking on the chocolate wafers! Hopefully, you’ll be able to resist and have enough left to process them easily in a food processor. If you don’t have a food processor, roll the wafers with a rolling pin between two pieces of parchment paper until they are fine crumbs. You could also use cream filled chocolate sandwich cookies instead of wafers, omit the sugar and add only enough butter to bring the crumbs together – you might not need any butter at all. Press the crushed cookies into the pan and then flatten firmly with a flat spoon. 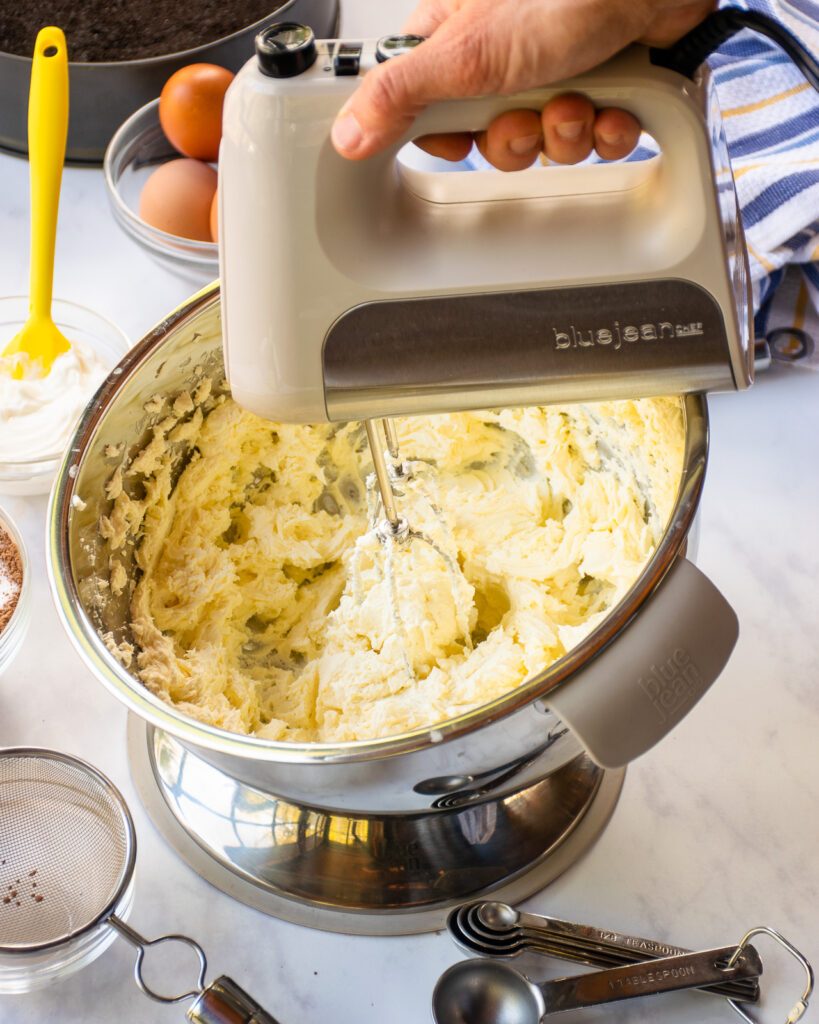 The one thing we don’t want to see in our finished cheesecake is a big crack across the top. There are a couple of ways to avoid this. The first comes in the mixing stage. Beat the cream cheese and sugar really well. Don’t hold back. This is your chance to get rid of any cream cheese lumps. Once you start adding the eggs, however, beat only as much as you need to in order to get the eggs to incorporate into the batter. Eggs (specifically the whites) will hold air if you beat them too much. That air expands in the oven and looks for an escape route, forming a crack in the top as the cheesecake bakes. So, solution… don’t beat the batter too much once the eggs have been added. 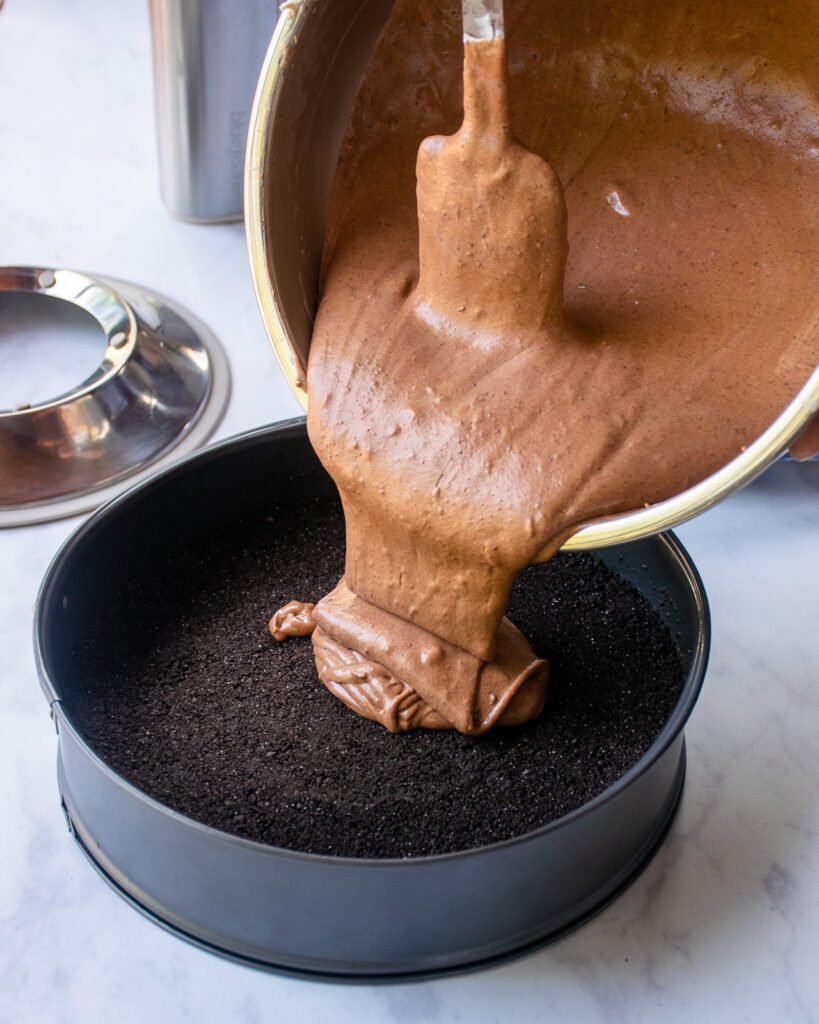 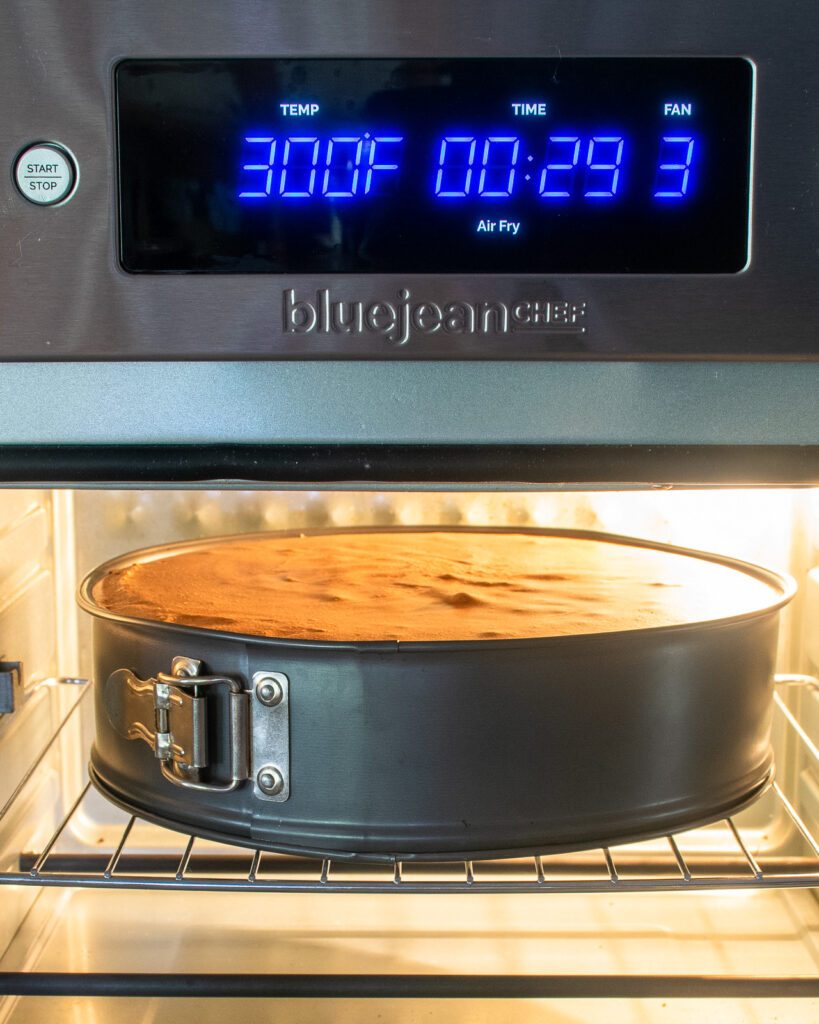 How to Air-Fry Cheesecake

If you’re making this cheesecake in a 9-inch springform pan, you’ll need to use an air fryer oven rather than a basket-style air fryer. That’s not to say you can’t make this with a basket-style air fryer – you can! You just need to adjust the recipe by using a pan the right size (7-inches for most air fryers) and reducing the quantity of ingredients accordingly. (If you print the recipe below, you’ll see the adjusted ingredient quantities under the Notes.) Regardless of which style of air fryer you are using, a cheesecake bakes in two stages in an air fryer. During the first stage of baking, the cheesecake should be covered with aluminum foil. Do your best to tent that foil on top so that it doesn’t touch the batter, but make sure you tuck the foil under the bottom of the pan so that it doesn’t blow off in the air fryer. The second stage of baking is done uncovered. Then, let the cheesecake cool for 30 to 60 minutes in the turned off air fryer before moving it to room temperature and letting it cool completely. When it has reached room temperature, cover with plastic and refrigerate for at least 2 hours. Overnight refrigeration is much better. This slow transition from the hot air fryer to the fridge is the second key to not getting a big crack in the top surface.

The cherry topping for the cheesecake is very simple. Just combine the cornstarch and sugar and toss it in a pan with the cherries and kirschwasser (or brandy). It only takes a few minutes and then let this cool completely – you don’t want to put hot cherries on a cool cheesecake. 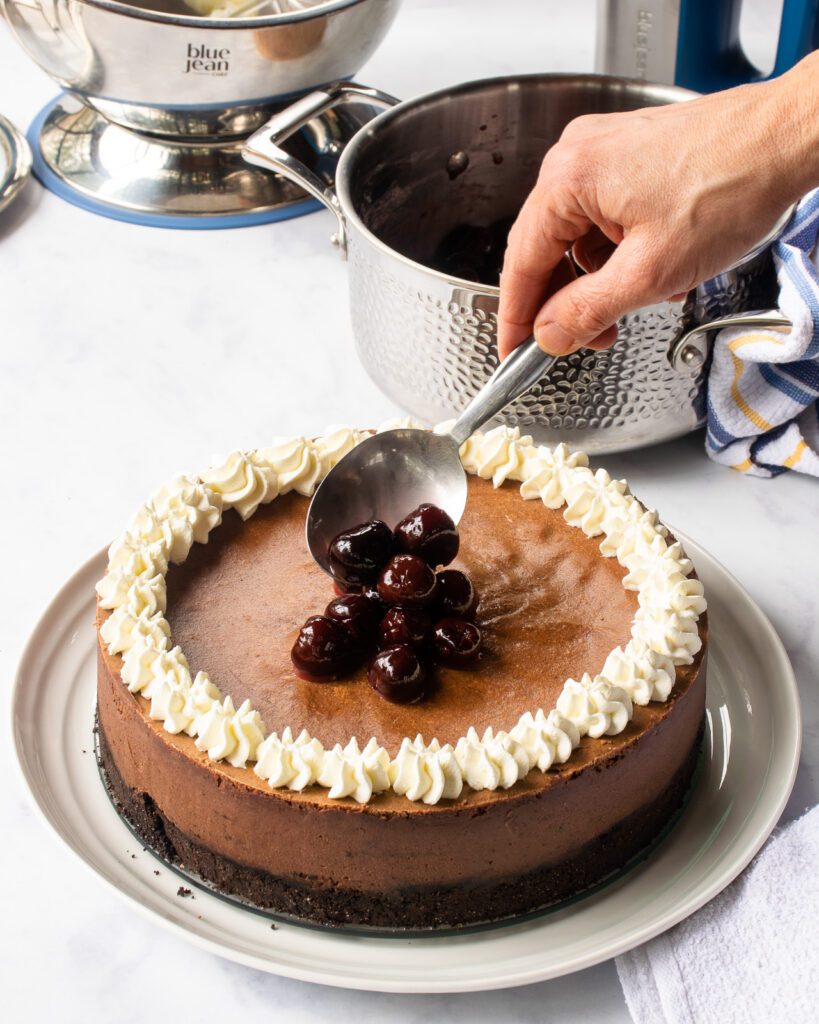 You could decorate this Black Forest Cheesecake a million different ways. Pipe the whipped cream in whatever pattern you like, but make sure it forms a complete rim around the top of the cheesecake. It’s the job of the whipped cream to keep the cherries on top. Then, spoon the cherries into the center, saving any of the liquid sauce for later. When you are serving the cheesecake, you can drizzle the sauce over each slice. 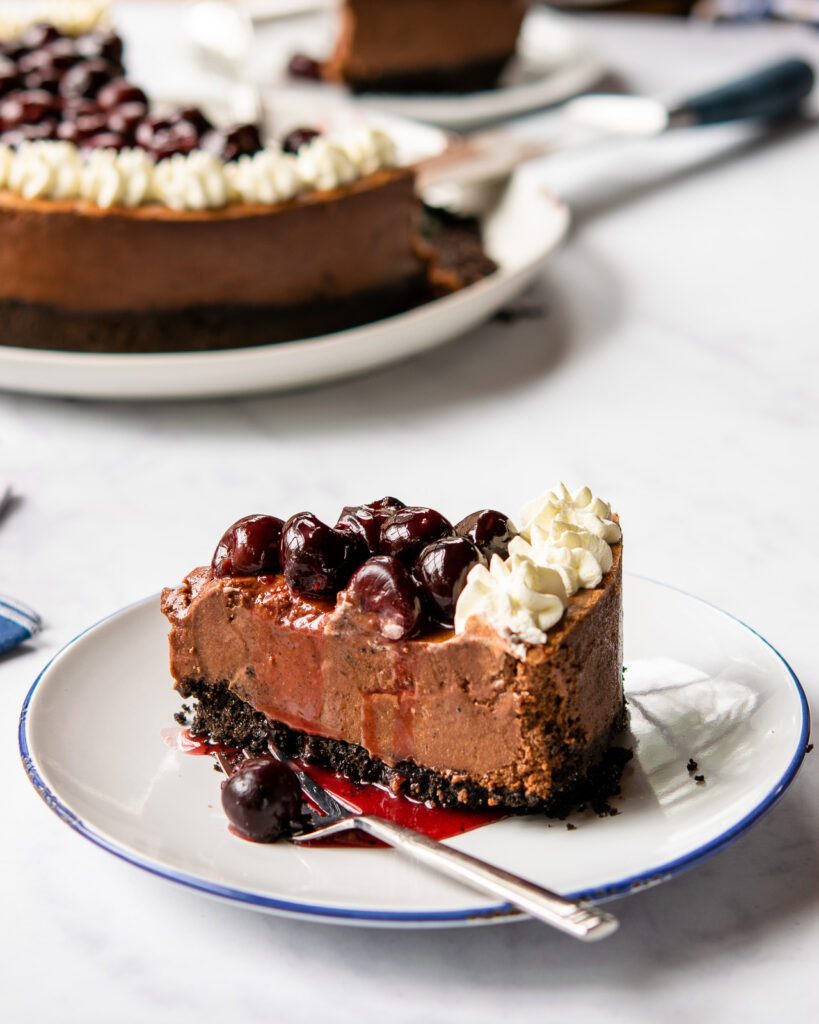 Making cheesecake ahead of time is not an option, it’s a requirement! You should always plan on making a cheesecake a day ahead of time so that it has enough time in the refrigerator to really set up. You can even freeze the cheesecake (undecorated), keeping it frozen for several weeks if it is wrapped well. Then, let it defrost in your refrigerator and decorate it just before serving. THAT makes dessert even easier than any of your guests could ever imagine.

An air fryer oven is pretty straight forward to use, but with a few tips you can really make it...View Technique

How to Choose an Air Fryer

If you think you'd like to add an air fryer to your kitchen, there are a few things to consider...View Technique

Hello! All photos and content are copyright protected. Please do not use our photos without prior written permission. If you’ve made this recipe and would like to share it with your friends, please link back to Black Forest Cheesecake - Air Fryer Version on Blue Jean Chef. Thank you!

Hello! All photos and content are copyright protected. Please do not use our photos without prior written permission. If you’ve made this recipe and would like to share it with your friends, please link back to Black Forest Cheesecake - Oven Version on Blue Jean Chef. Thank you!