How to Cut a Leek

Leeks are the most mysterious member of the allium or onion family. Their flavor, however is so lovely that it's worth unravelling the mystery and learning how to clean and cut this vegetable.

When I was young, my mother told me that whenever I am making a vegetable soup, always add a leek. It’s the leek that makes the difference. As an older cook, I completely agree. A leek is a member of the onion family, but it’s flavor is milder than your standard yellow or white onion. It’s mild enough, in fact, with a slightly sweet “green” flavor, to be the main focus of a recipe in a very delicious way. As an ingredient in a recipe, it adds onion flavor but in a mild pleasing way. Leeks do hold a certain mystery, however. A leek is a long vegetable that grows out of the ground, collecting a little dirt between its layers, so how to tackle it as a cook is not always obvious. That’s why you’re here – to learn how to cut and prepare a leek. 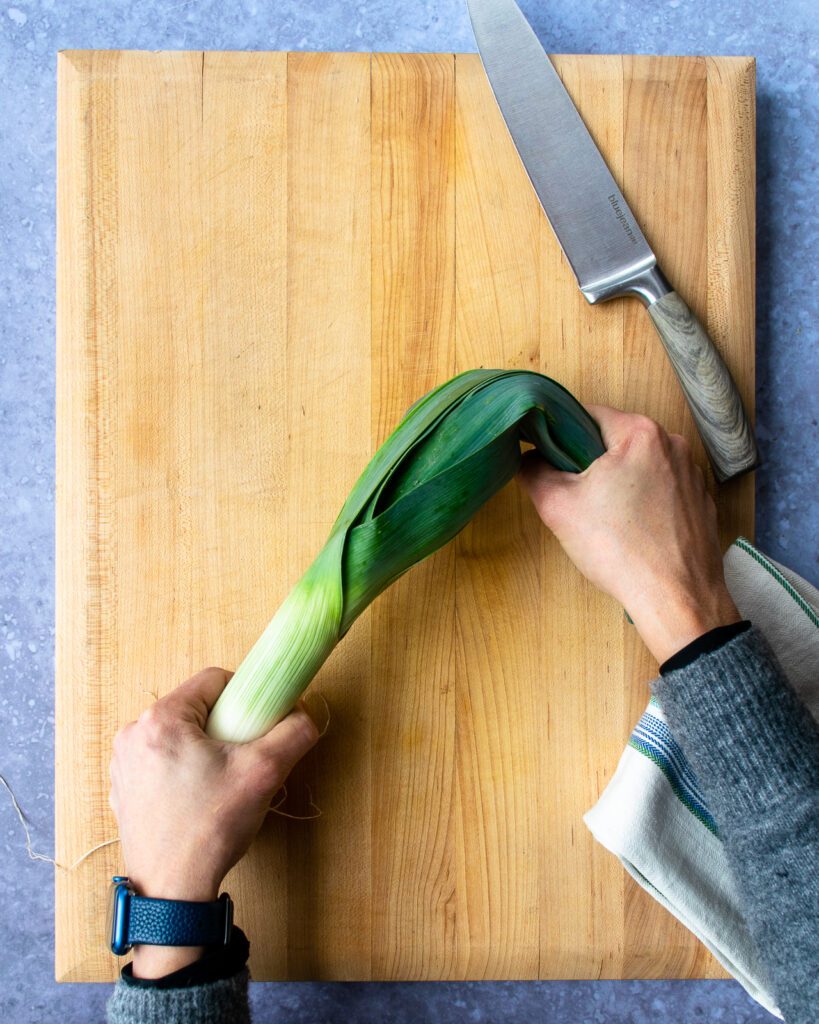 Step 1: Trimming Off the Dark Greens

The edible part of a leek is the bottom white section. The tough dark green upper leaves should be discarded – or better yet, used for a vegetable stock. By holding the leek at either end and bending it gently, it will fold where it the center white section of the leek ends. That is where you want to cut the leek. There will still be some dark green leaves on the outside, but you’ll deal with those later. 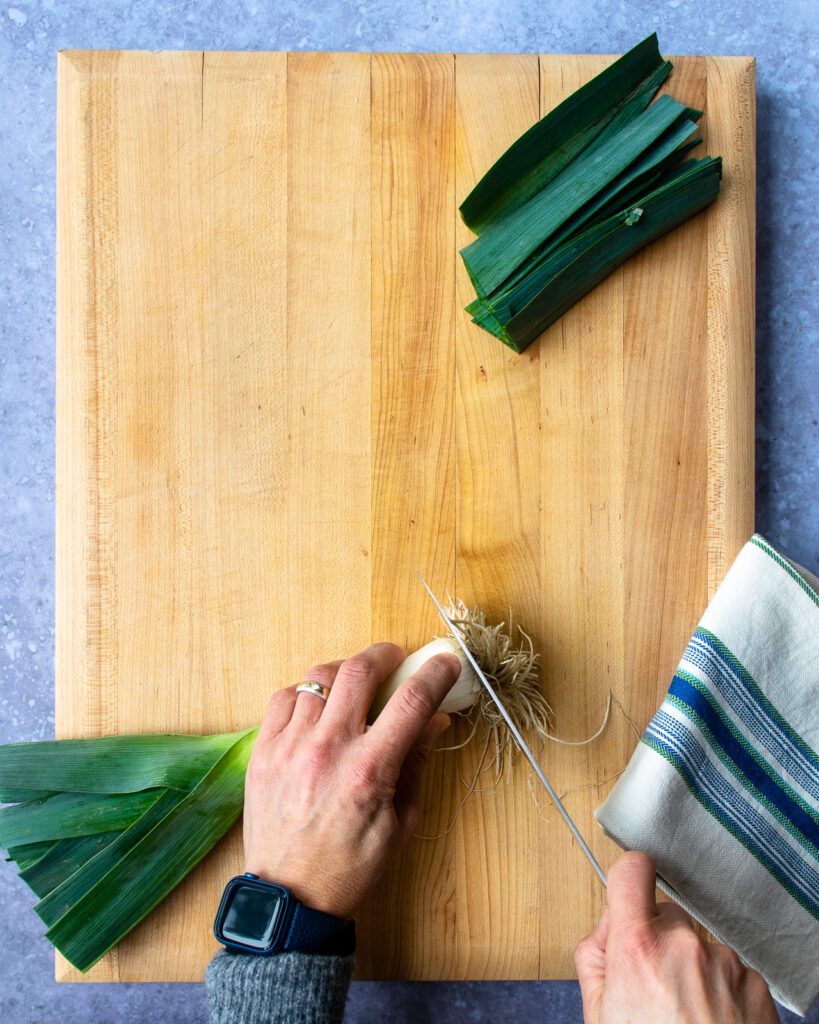 The next step is trimming as little of the root off the leek as possible. Just like regular onions, the layers of the leek are held together at the root, so we want to keep that intact for the time being. Trim off just the hairy roots. 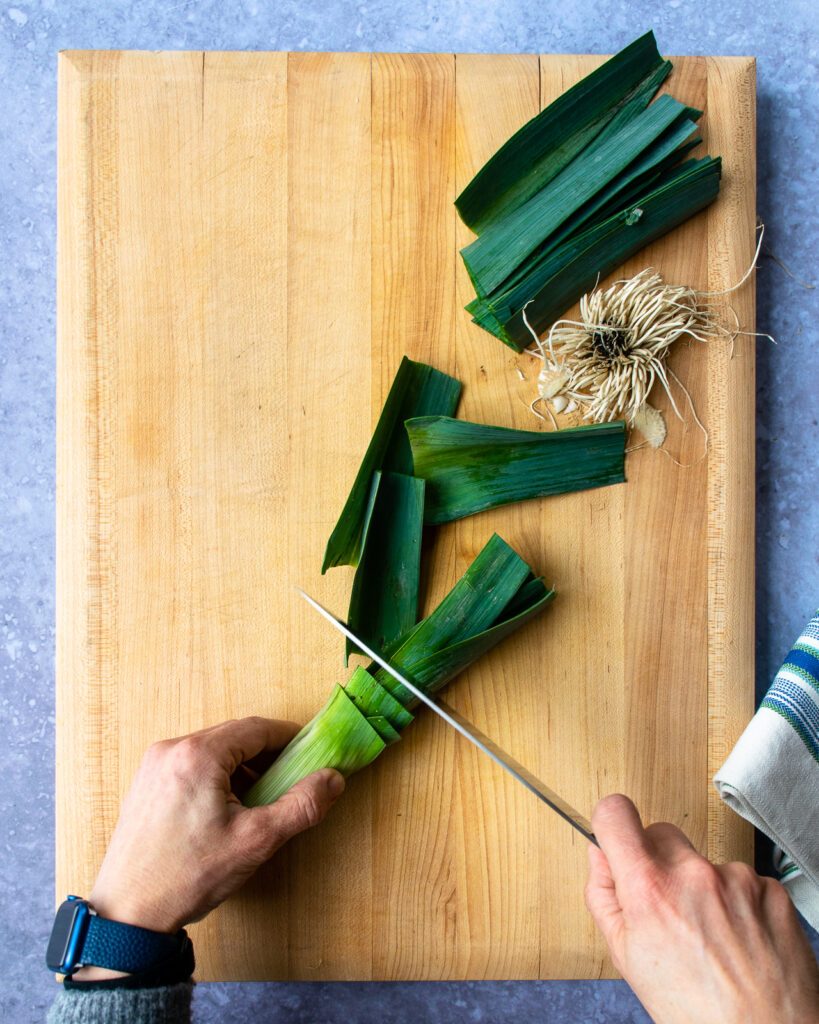 Now you want to remove the remaining tough dark green leaves. Do this by rolling the knife gently around the outside of the leek, removing one layer at a time, just where the leaf starts to change from light to dark green. As you remove the layers, you’ll see that the leek starts to darken higher and higher up the leek and your knife will move farther away from the root. 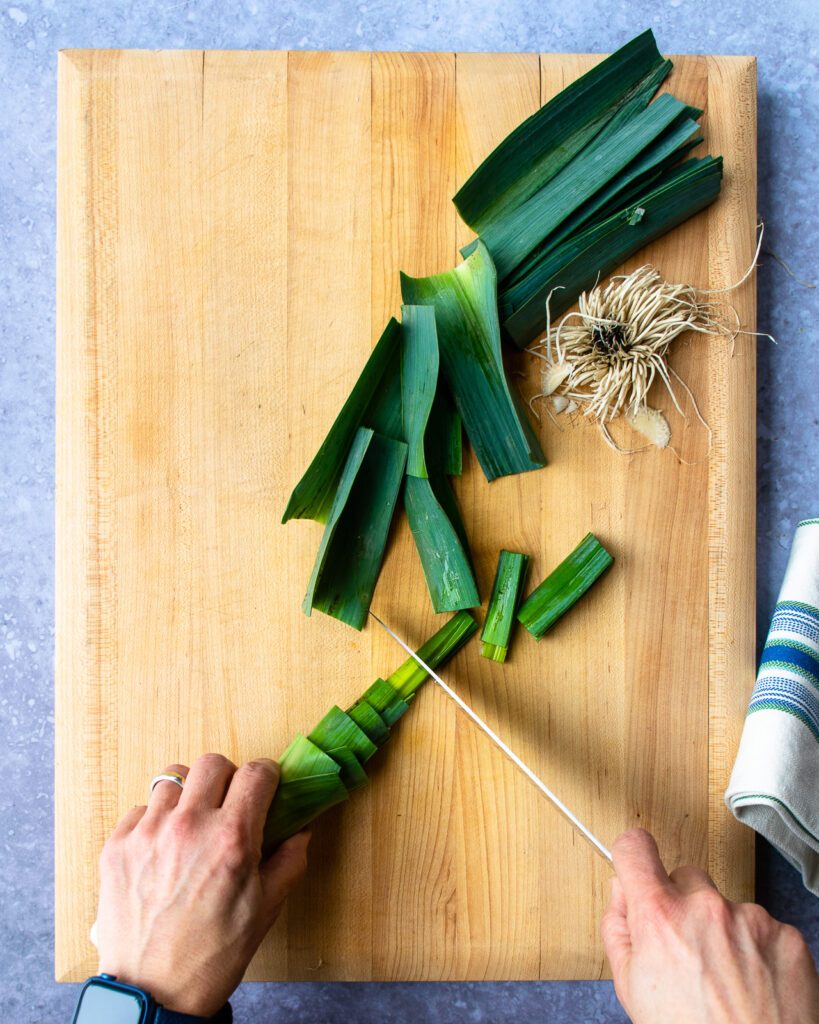 Eventually, you’ll be left with a leek that has several layers exposed and all the dark green leaves will have been removed. 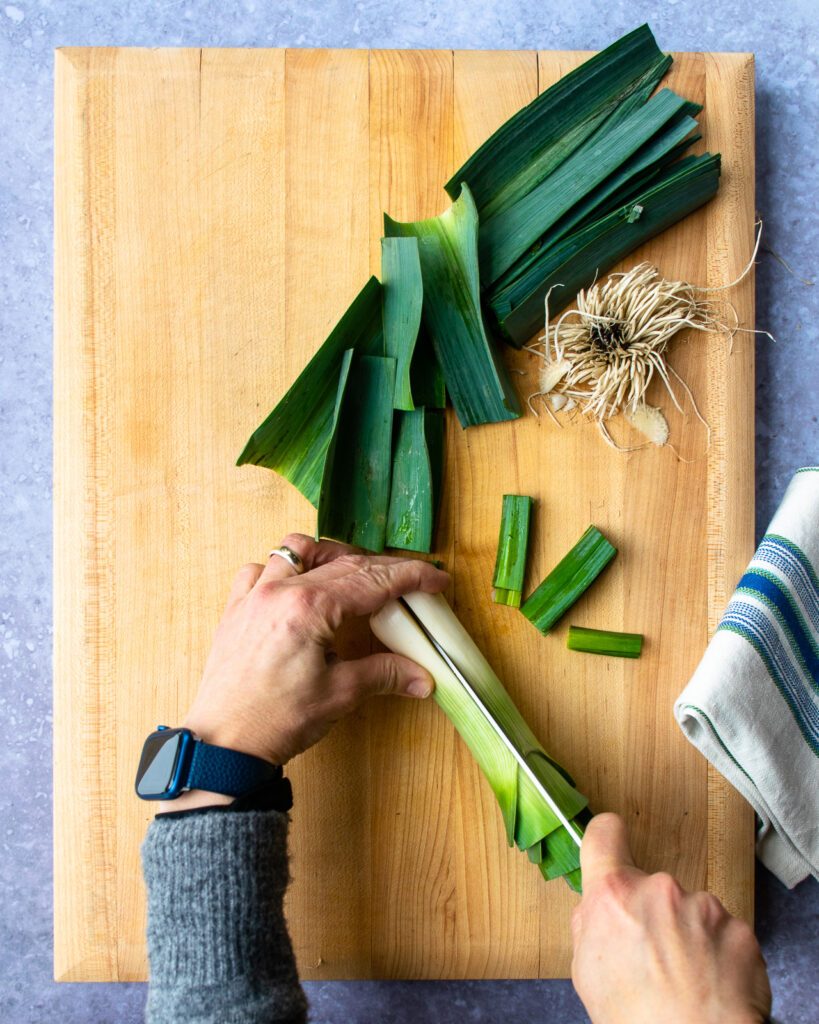 Step 4: Slice in Half

Next you’ll want to slice the leek in half, the length of the leek. This is so that you can expose the insides of the layers of leek where dirt will have collected. 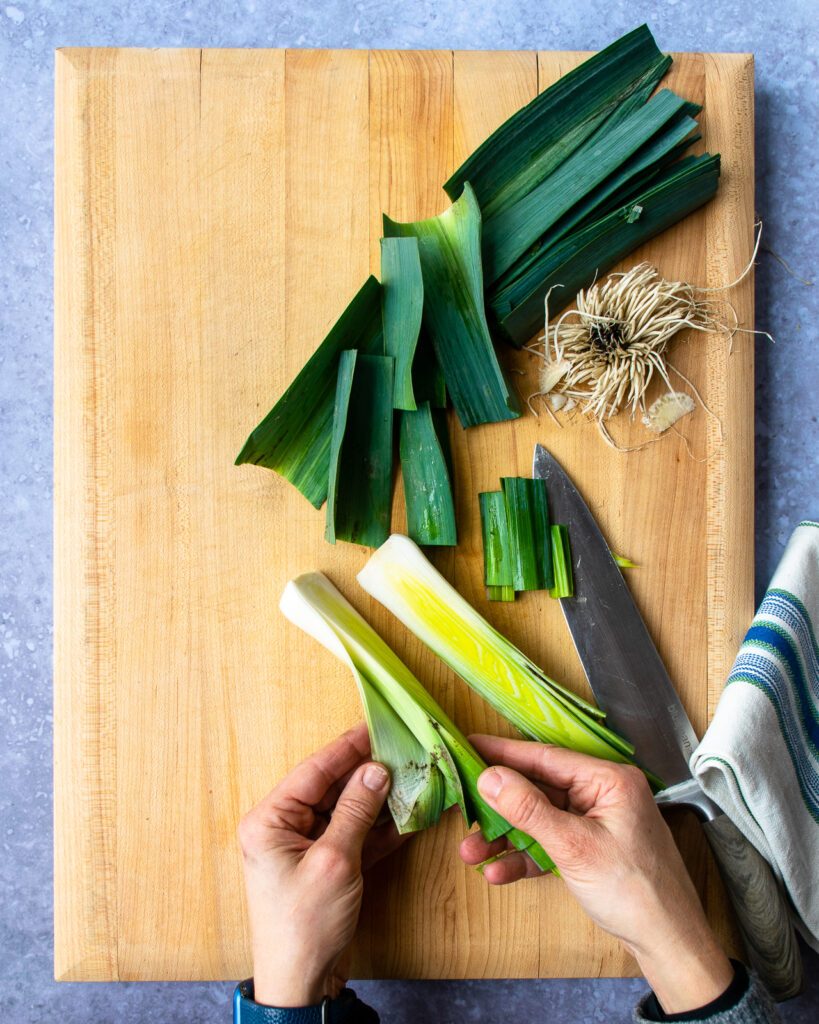 Pull the leaves of the leek apart (they will stay together because you left the root intact) and wash under cold running water. Be sure to hold the leek under the running water with the root end up so that the dirt is washed away, rather than washed deeper into the leek. At this same time, wipe down your cutting board before returning the leek to the work surface. 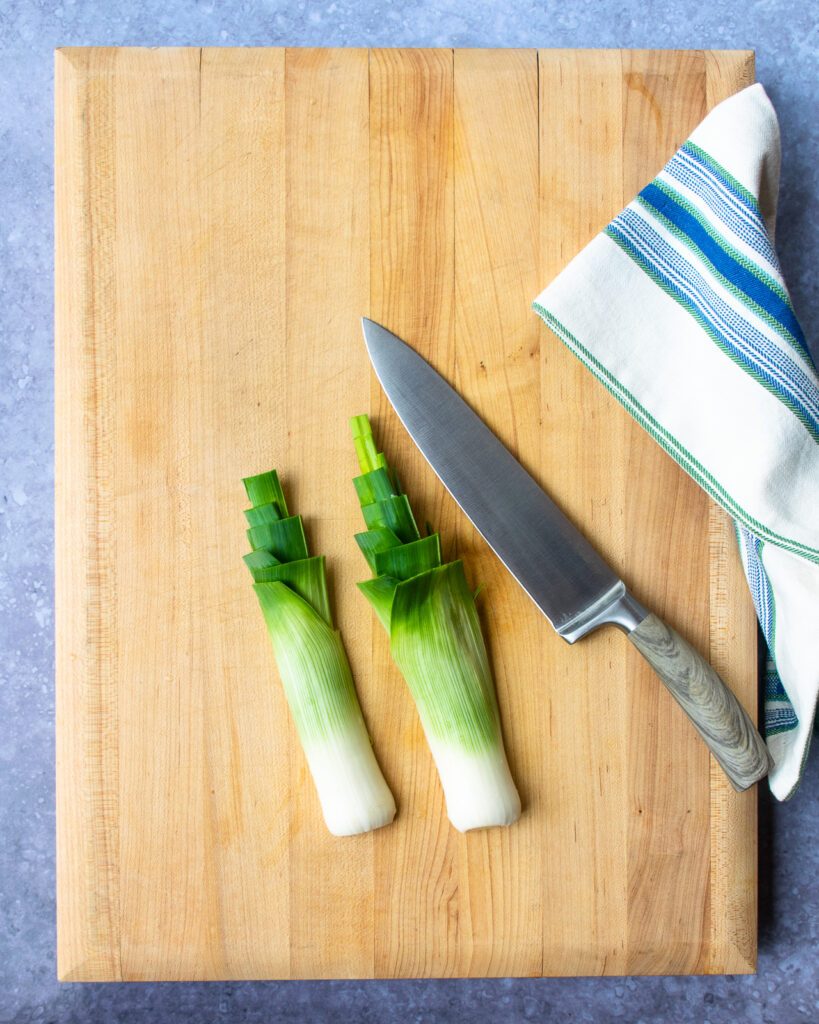 Some recipes call for leeks to be left in halves. This is common if you are braising leeks or plan on making a leek gratin. The flat surface of the leek can be sautéed and browned nicely before being turned over and braised in a little stock, topped with breadcrumbs and cheese and broiled. 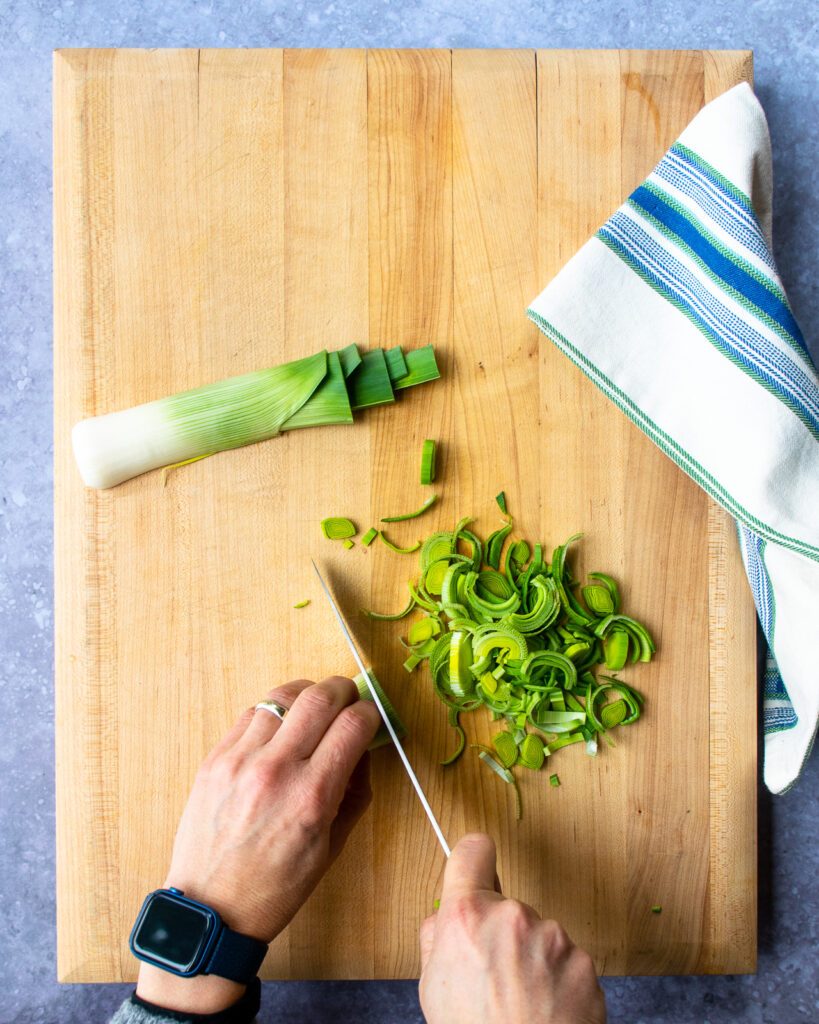 Usually, leeks are an ingredient in a recipe with other ingredients and you will need to slice the leeks. Use that flat surface against the cutting board and slice your chef’s knife through the leek with a rocking motion. 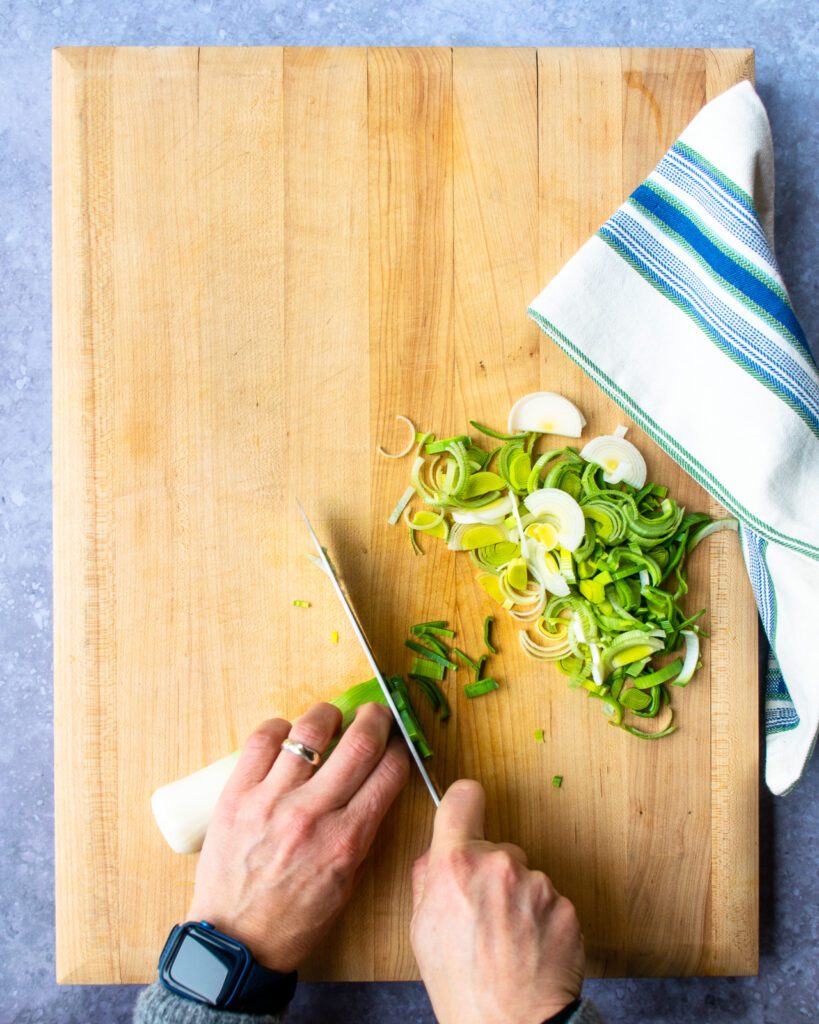 Once you have your leeks prepped, you’re ready for any recipe. You could try the Buckwheat Crêpes with Chicken Mushrooms and Leek, or try the Mussels with Beer, Leeks and Cream, or my favorite roast turkey recipe – the Turkey Roulade with Leeks, Mushrooms and Marsala. And, of course, if you’re making a vegetable soup… always add a leek.

Once you've mastered making buckwheat crêpes for a savory meal, it's nice to have an idea of what you'd like...
View Recipe

Mussels with Beer, Leeks and Cream

Why Eat Leeks? When I was young, my mother told me that whenever I am making a vegetable soup, always...
View Recipe

One Pot Pasta with Mushrooms, Leeks and Broccoli

This vegetarian one pot pasta with mushrooms, leeks and broccoli is perfect for a busy weeknight or a weekend pasta...
View Recipe