How to Cut a Bell Pepper

There's a super easy and tidy way to cut bell peppers without getting the seeds all over your cutting board. Once you start cutting your peppers this way, you'll never go back!

Let me show you how!
Advertisement - Continue Below

Bell peppers are the most common pepper in our supermarkets. They are also known as sweet peppers and are the mild tasting younger sister of hot and spicy chili peppers. The most interesting feature of bell peppers is their color. While there are many different varieties of bell pepper, all peppers change color on the vine. Almost all bell peppers are green when they are underripe, and then they ripen into yellow, orange and often red. A few special varieties of peppers are purple or ivory colored at first, but all peppers change color as they ripen. What does this mean for you? Well, peppers that are more ripe tend to be sweeter than underripe peppers, so red peppers are the sweetest of the peppers. Because peppers ripen only when still on the vine, orange, yellow and red peppers take longer to grow than green peppers, and as a result you’ll find they are more expensive than green peppers. That extra time on the vine also allows for more beta-carotene and Vitamin A to be produced, so you’ll be spending your extra money on nutrition as well as a sweeter flavor when you pick up red peppers instead of green.

When buying peppers, look for those that are shiny, un-wrinkled and with un-blemished skin. Peppers should be firm when you squeeze them. While curved and curly peppers are fun to look at, if you choose peppers with straight sides, it will make it much easier to cut.

Store peppers in a plastic bag in the vegetable drawer of your refrigerator. Colored peppers are good in the fridge for 4 to 5 days, while green peppers can easily last a week.

Let’s Cut to the Chase…

The most troublesome part of cutting a bell pepper is getting all the seeds inside all over the cutting board. Thankfully, there is a way to avoid this. 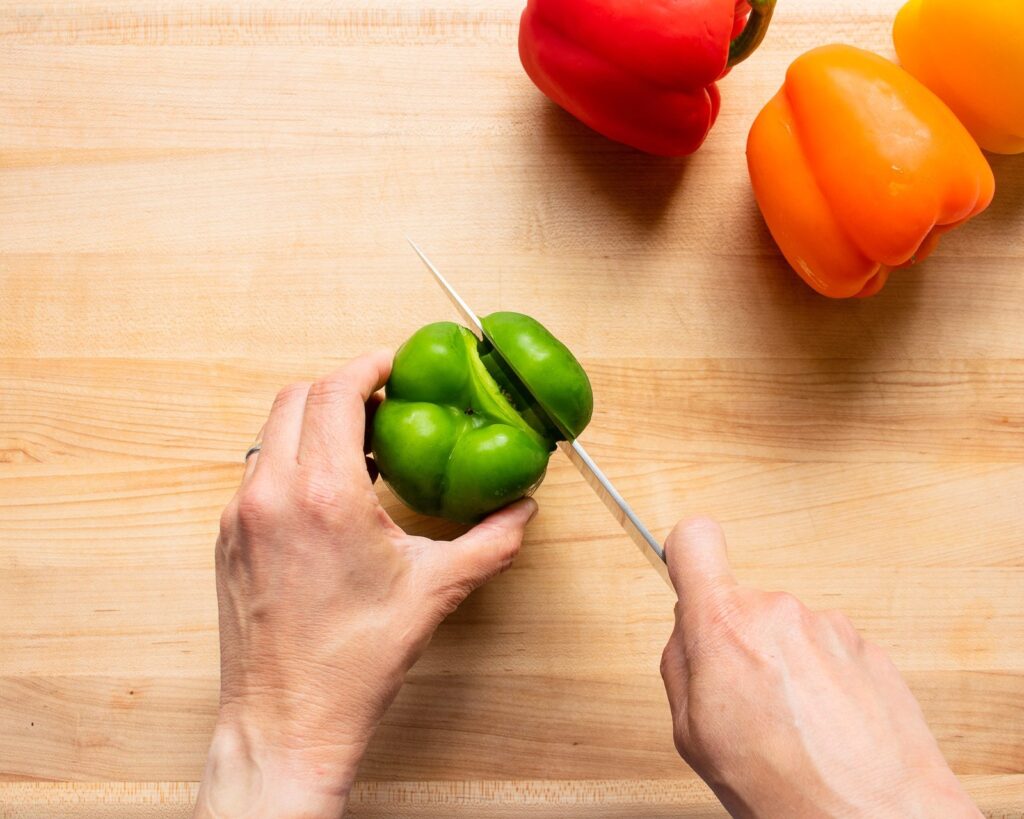 Once you have one side removed from the pepper, slice off the next side, again using the lines on the pepper as a guide. The last side of the pepper is always the hardest to remove, but do your best to slice down the veins and around the seeds, which should be grouped right underneath the stem of the pepper. 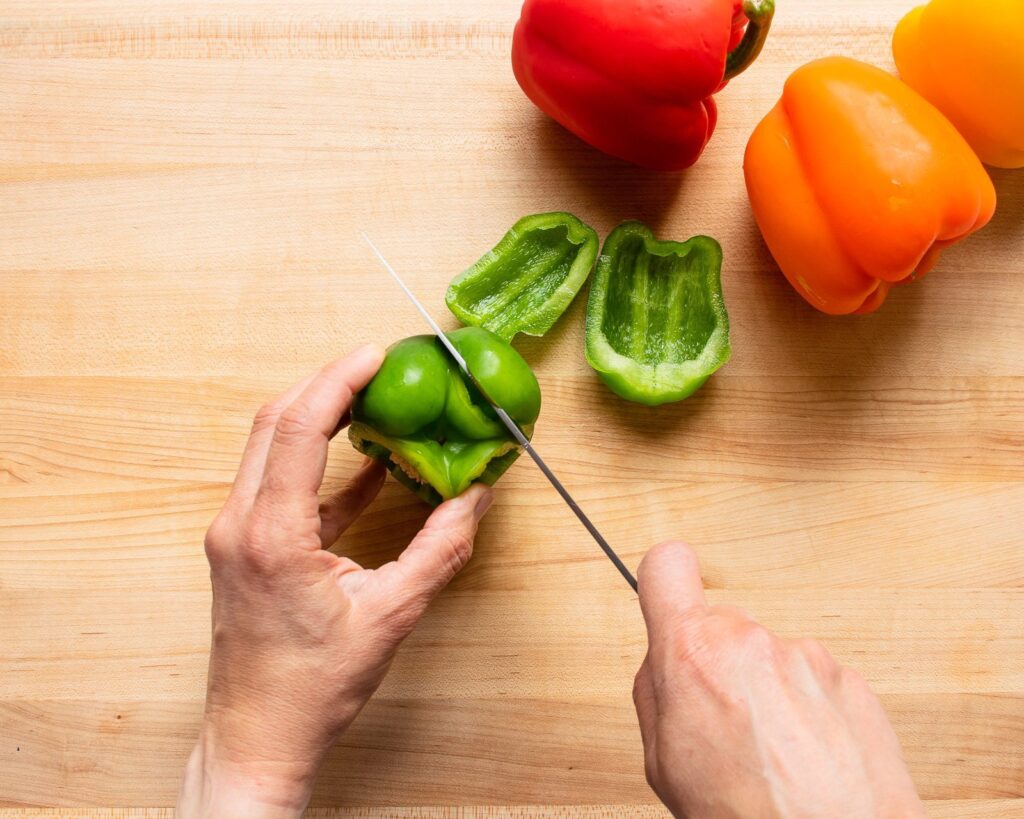 After removing the sides of the pepper, you can easily cut the pepper into slices, small dice or large dice. 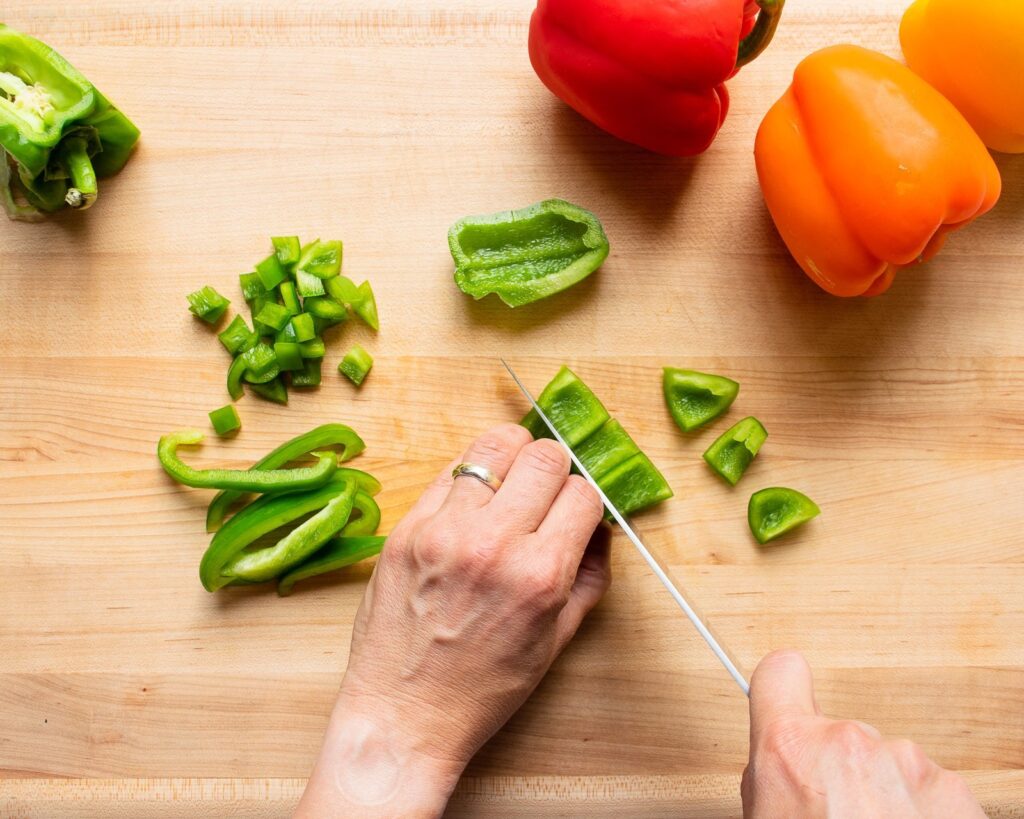 The one time this method won’t work is if you want to slice rings of pepper, as you sometimes see on a  pizza. In order to do this, insert the point of your knife into the top of the pepper and slice around the stem. 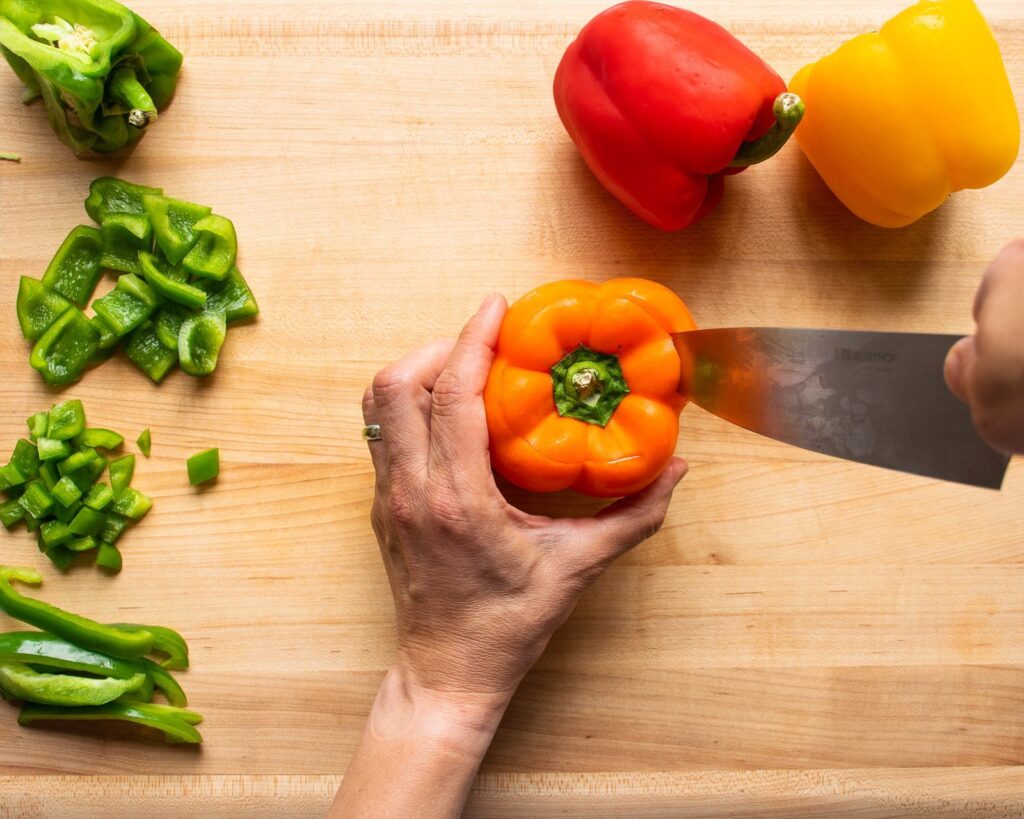 If you do this properly, you should be able to pull the packet of seeds right out of the pepper. This is what you would do if you were preparing  stuffed peppers. 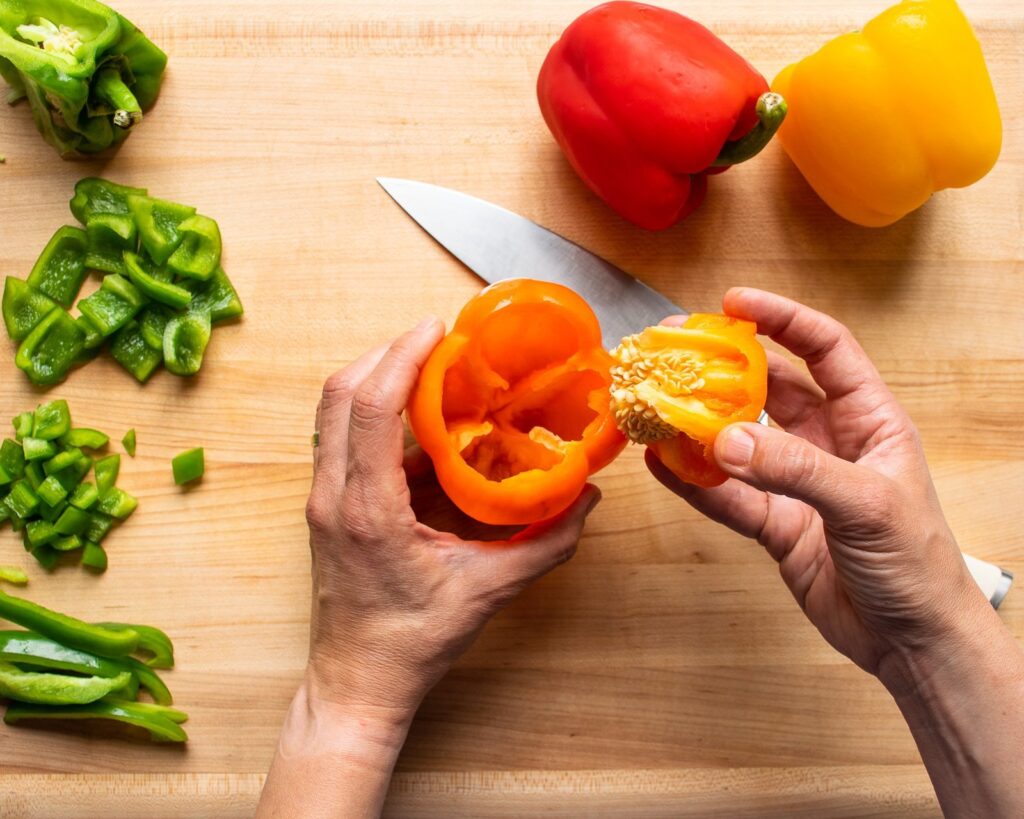 If you’re going for the sliced rings, just turn the pepper on its side and slice away. 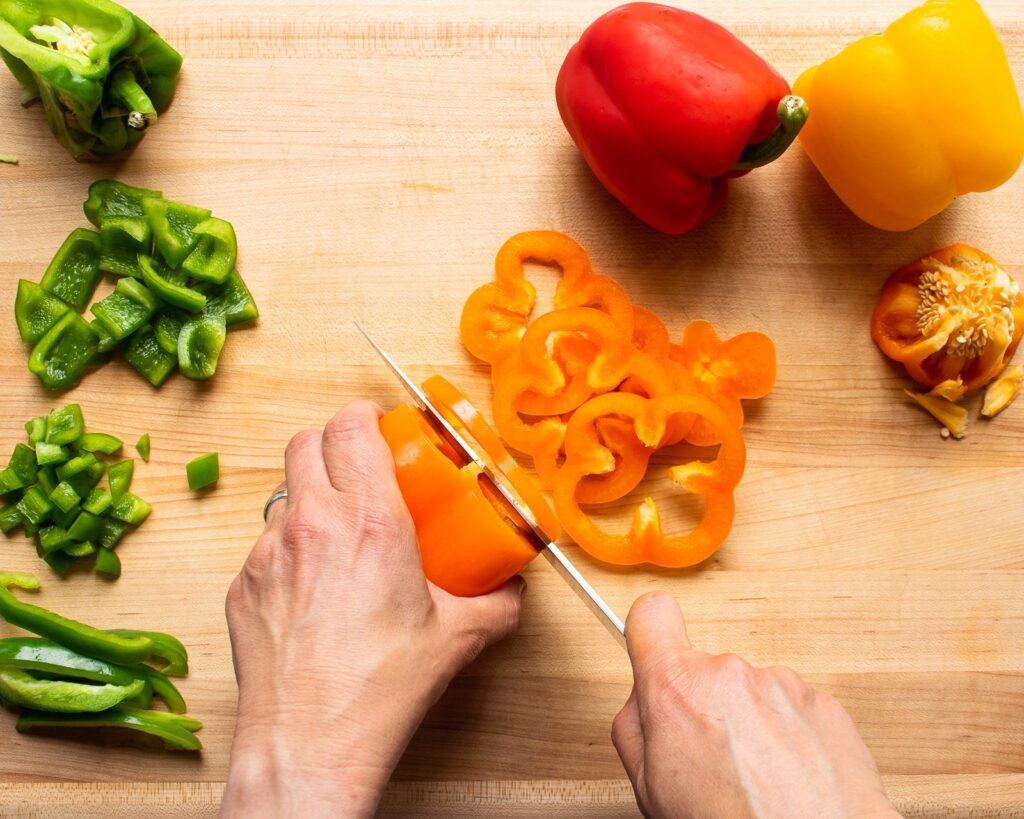 Peppers are versatile and can add a little sweetness, color and nutrition to your meal no matter how you slice ’em! So, grab your chef’s knife and give it a go. Practice makes perfect. 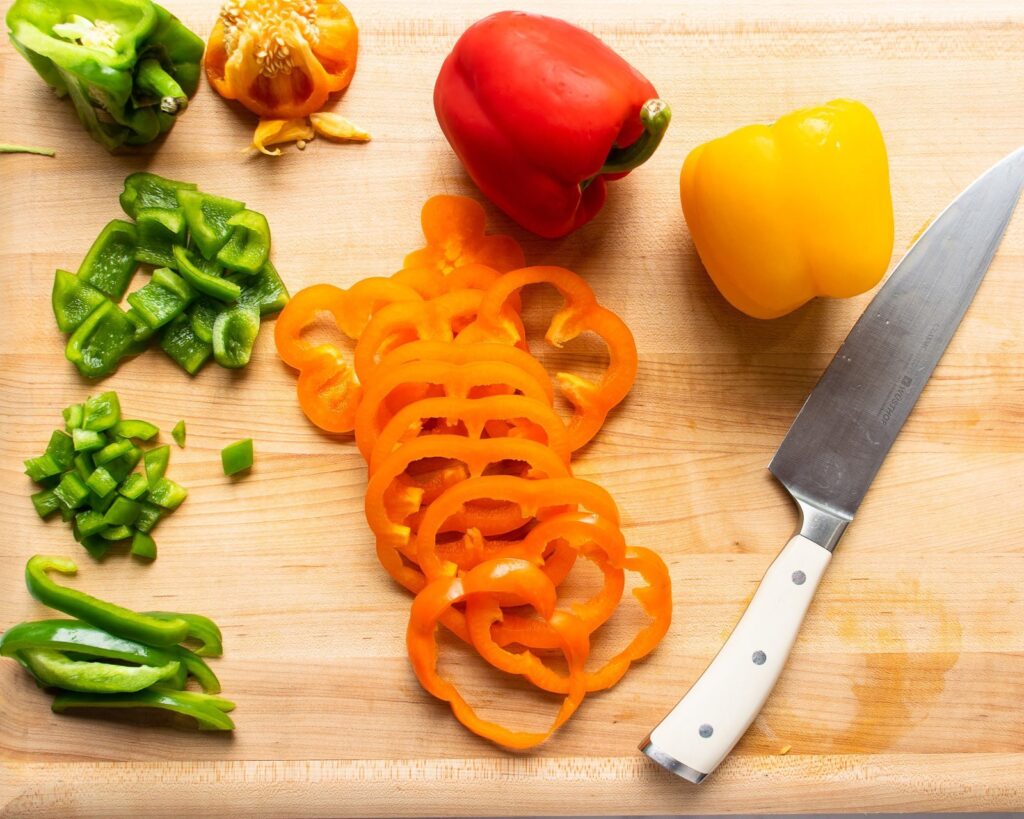 If you’d like your pepper flavor to be even sweeter, try roasting the peppers. There are many ways to roast a pepper and you can read about that here.

How to Cut a Bell Pepper

This air-fried sausage sandwich is the kind of sandwich you can really sink your teeth into... and then it drips...
View Recipe

Panzanella salad is one of my favorite summer salads. You can make this any time of the year with bread...
View Recipe

This recipe for penne pasta with sausage, peppers and onions includes how to make your own pasta with an electric...
View Recipe

I'm going to warn you about these air-fried chicken stuffed tortillas and you will ignore my warning. That's how it...
View Recipe