How to Cook Spaghetti Squash

Spaghetti squash is a great low-carb option for the pasta lover. It's easy to cook and you can put any of your favorite pasta sauces on top. There are three ways to cook this unique and delicious squash.

Pick your method!
Advertisement - Continue Below

Spaghetti Squash is not only a perfect stand in for spaghetti because when you cook it, its flesh separates into strands that can replicate long pasta, but because it is nutrient dense – it has very low calorie, but high nutritional content. That makes it a much better option than pasta on a number of levels. It comes in a variety of shapes, sizes and colors (ivory, yellow and orange), but how to cook spaghetti squash remains the same and there are three great ways to do it.

The first step is to cut the spaghetti squash in half. That can be a task if the spaghetti squash is very large, but once you’re through the tough exterior, the center of the squash is made up of a cavity with seeds that is easy to cut through. So, grab a large chef’s knife and slice it from stem to flower end. Then, scoop out the seeds of the squash and season the inside with salt, pepper and a little olive oil. Now you’re ready to cook it one of three ways – just pick your method. 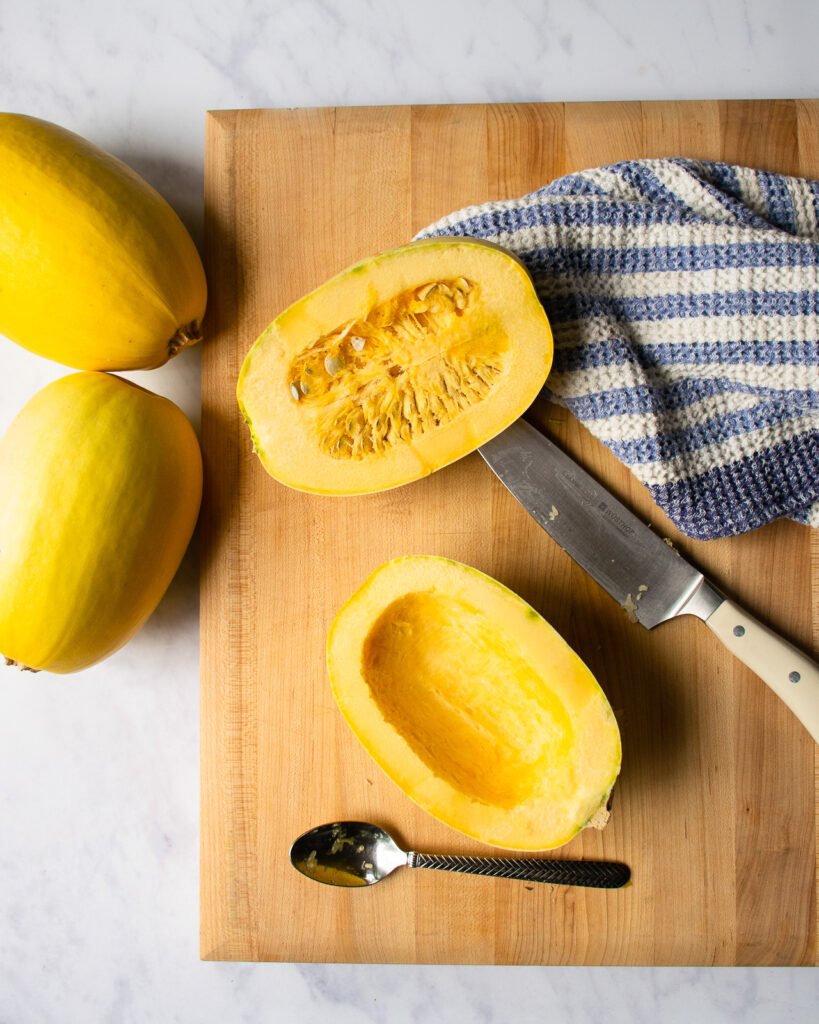 How to Cook Spaghetti Squash in the Oven

To cook spaghetti squash in the oven, pre-heat the oven to 400ºF and place the seasoned and lightly oiled squash cut side down on a baking sheet. Roast the squash for 30 to 45 minutes, or until a paring knife slides into the flesh through the skin easily. How long it takes will depend on how big and dense your particular squash is. 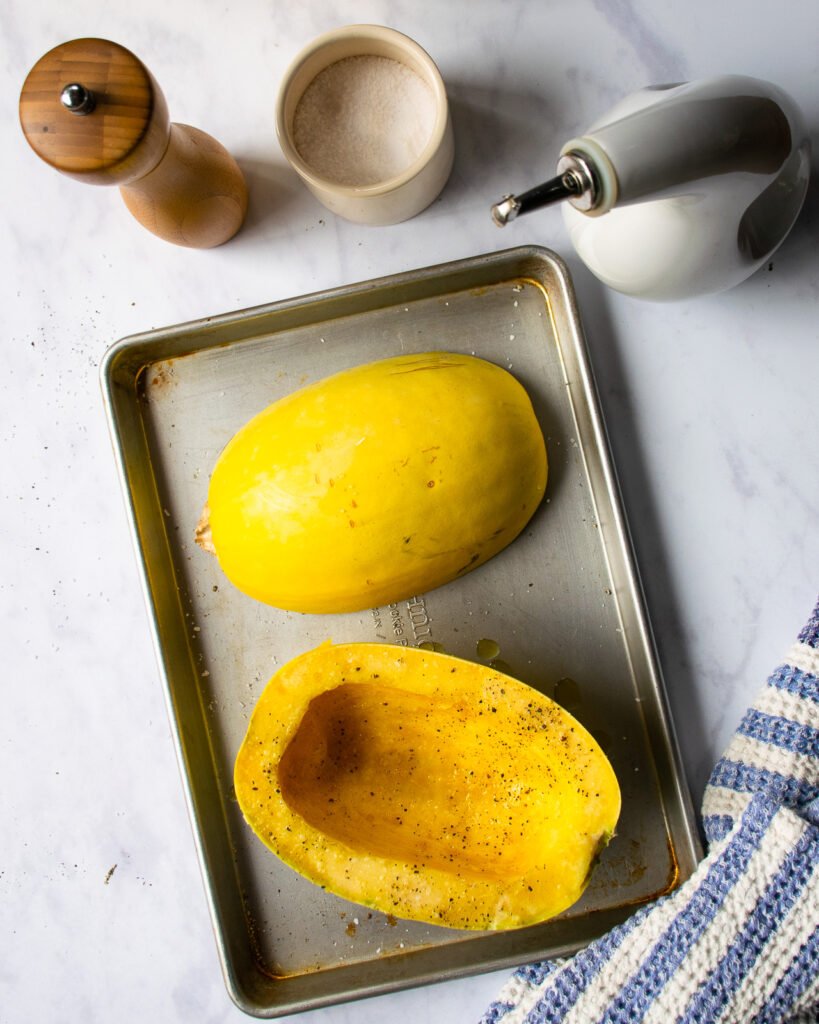 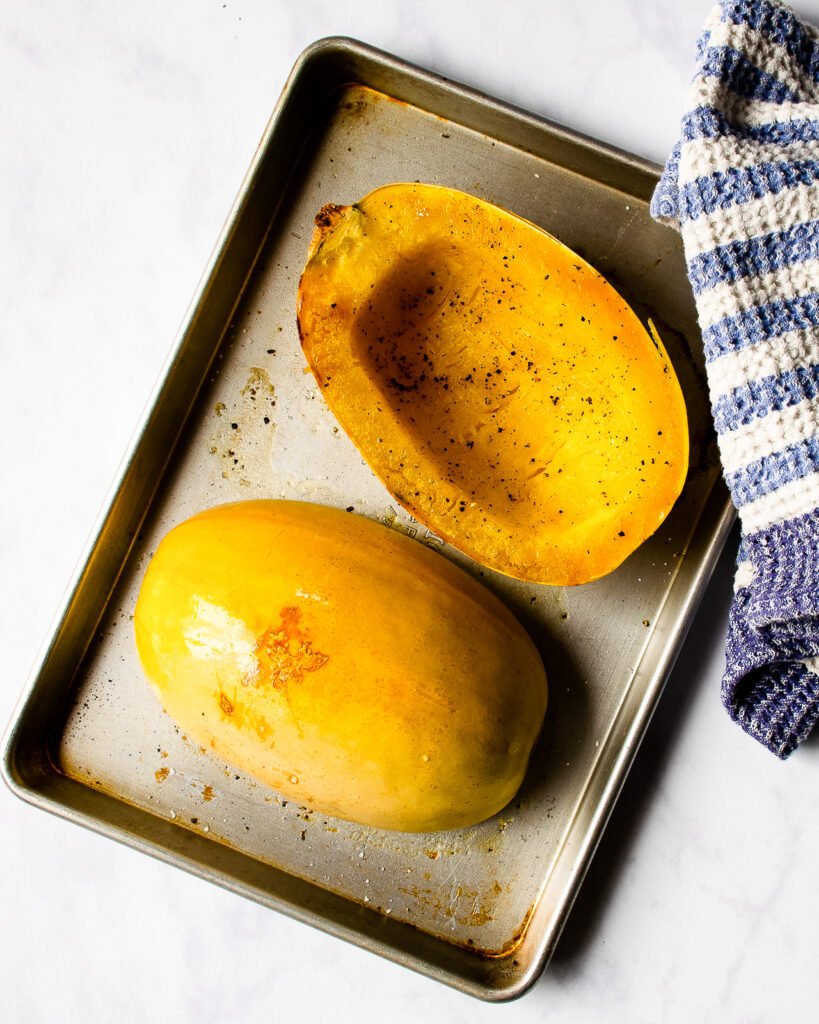 How to Cook Spaghetti Squash in a Pressure Cooker

If you have a pressure cooker, you can cut down on the cooking time to about ⅓ of the oven cooking time. Place a rack in the bottom of your pressure cooker and add 2 cups of water. Place the spaghetti squash halves into the cooker, on the rack. It’s ok if they are stacked on each other. Lock the lid in place and cook on HIGH pressure for 15 minutes. Then, release the pressure using the quick-release method and carefully remove the squash from the cooker. 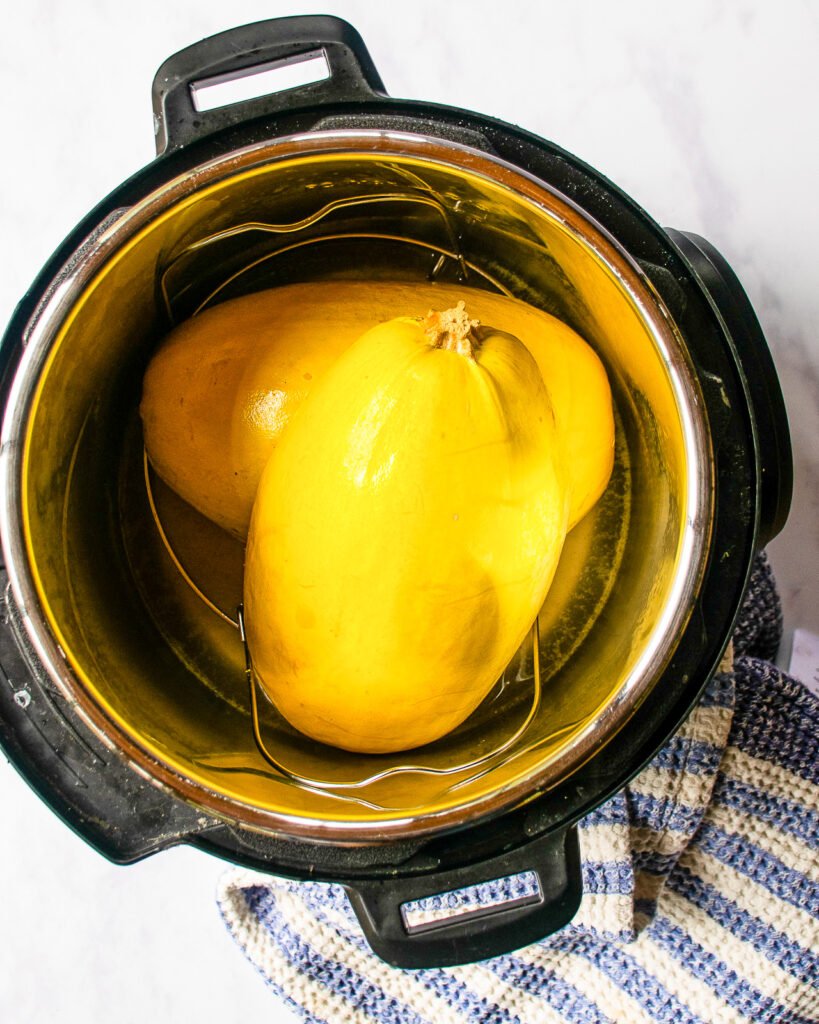 How to Cook Spaghetti Squash in the Microwave

Using a microwave to cook your spaghetti squash cuts the time down even more. With a microwave, you don’t have to wait for the cooker to come to pressure or for the cooker to release the pressure. Simply place the spaghetti squash into a microwave safe dish, cut side down. Microwave for 8 to 12 minutes, depending on the size of your squash. Again, the squash is fully cooked when you can pierce through the skin and into the flesh with a paring knife easily. The only disadvantage to using the microwave is that it’s much easier to cook just half a squash at a time because most spaghetti squash are so big that only half will fit in a microwave-sized casserole dish. If you’re only cooking for one or two – this is perfect. 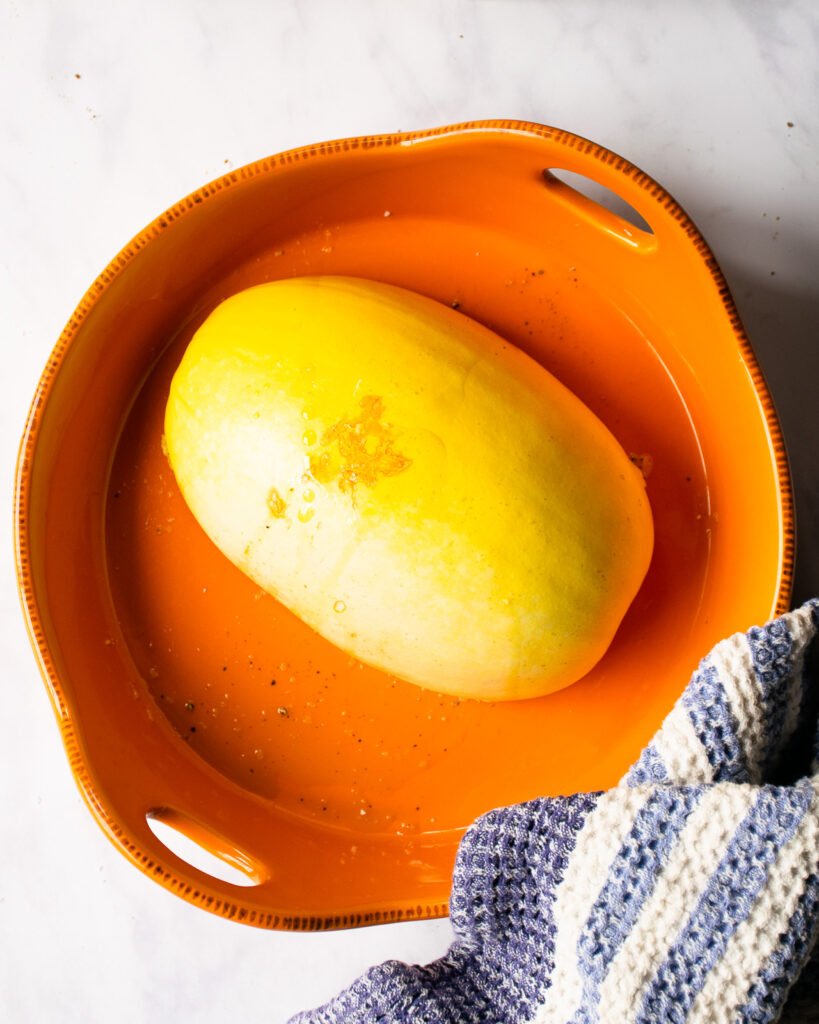 Now what? How to Serve Cooked Spaghetti Squash

Once you have your cooked spaghetti squash, you can keep the squash cut side down on the baking sheet, casserole dish or in the pressure cooker to keep it warm for quite a long time.  When you’re ready to serve it, separate the flesh into strands. Hold the squash half with a towel (it’s hot!) and use a fork to pull the flesh away from the skin. It will fall into strands and is ready to serve. 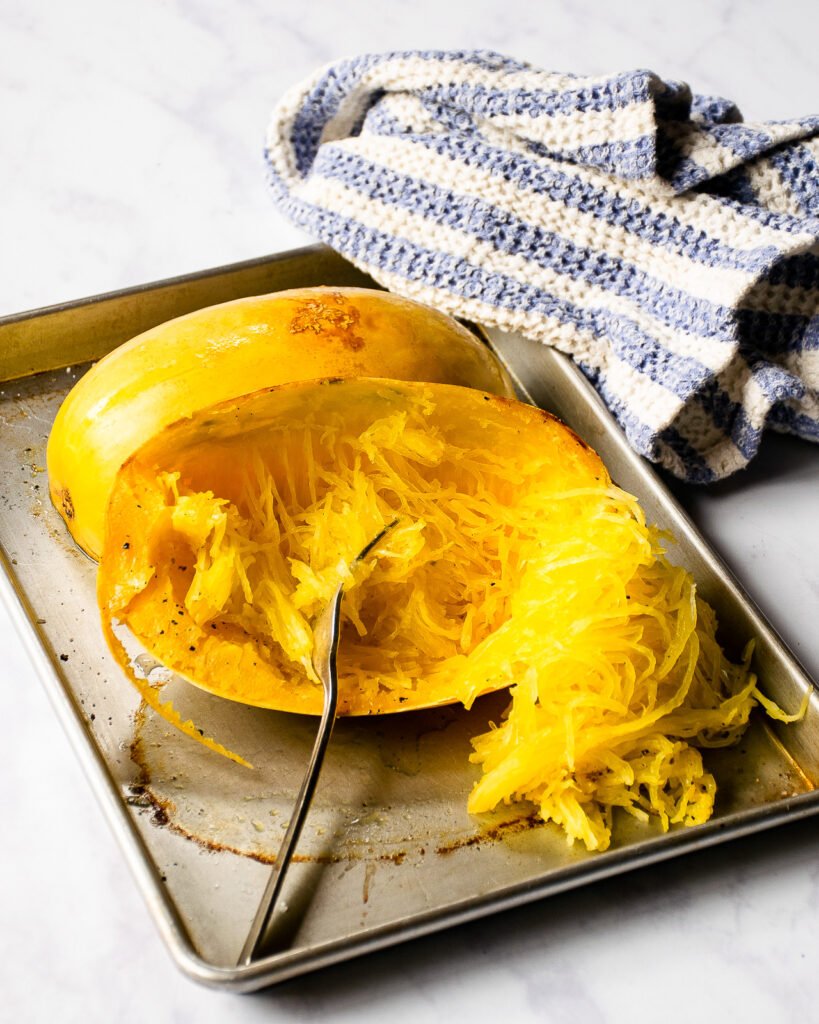 What to Serve with Spaghetti Squash

You can top spaghetti squash with whatever you like. You could keep it simple and just top it with parmesan-parsley bread crumbs or you could top it with marinara sauce or even bolognese sauce. Most traditional pasta sauces can be served on spaghetti squash, so think of that the next time you’d like to eat a low-carb dinner, or someone you’re serving tells you they are gluten-free. It’s a fantastic, tasty and satisfying option. 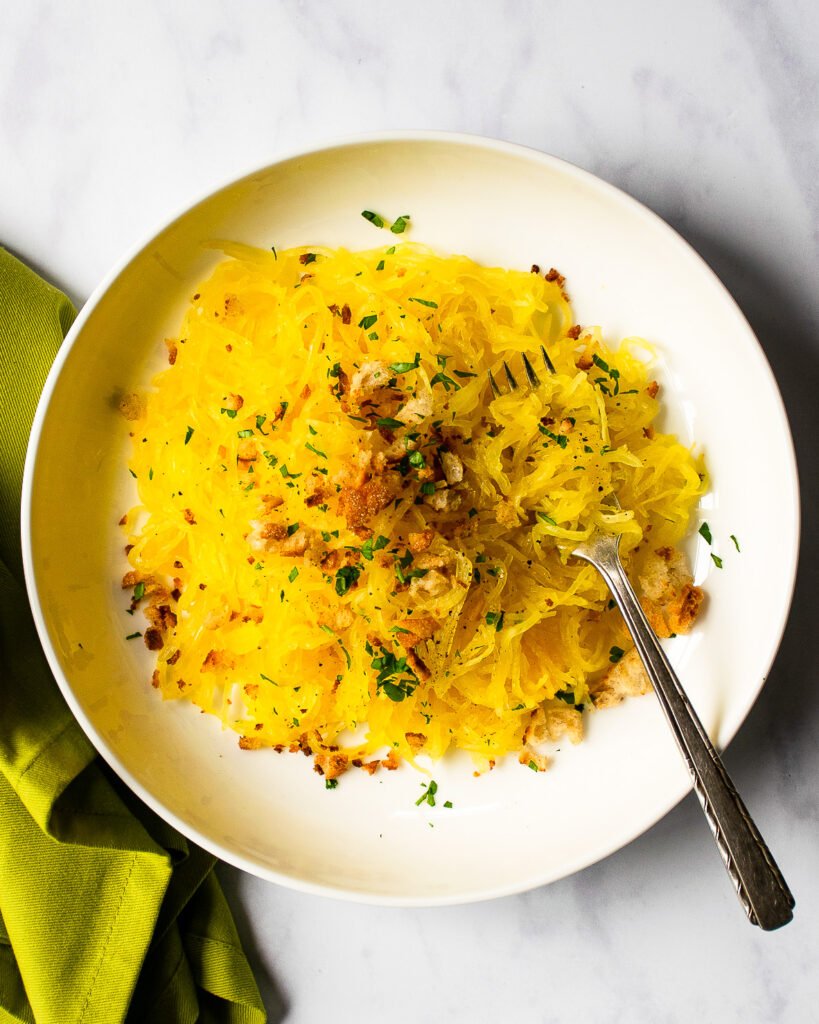 How to Cook Spaghetti Squash

Spaghetti Squash makes a great low carb option for pasta or it can be a vegetable side dish all on...
View Recipe

Rigatoni with Italian Sausage and Artichokes

This rigatoni with Italian Sausage is one of my favorite pasta recipes! All in all, it's a perfect combination of...
View Recipe

All Ingredient Basics
Advertisement - Continue Below