Roasting a chicken on a vertical roaster gives you the most moist and tender chicken possible. Being able to do that roasting on a BBQ grill makes that moist chicken even tastier and frees up your oven too. 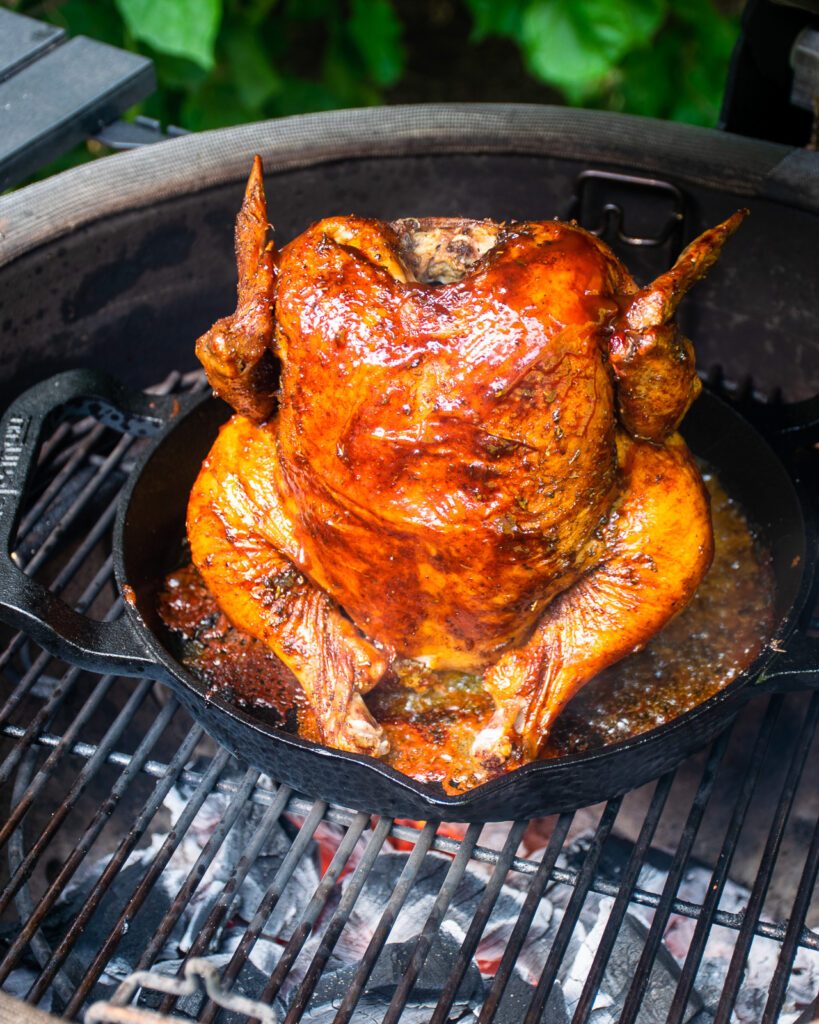 The Juiciest Beer Can Chicken

I’ve roasted many a chicken in my time, but every time I use a vertical chicken roaster to do it, I wonder why I ever roast a chicken any other way. In my experience, roasting a chicken vertically gives you an amazingly juicy chicken that is evenly cooked and delicious every time. This BBQ Beer Can Chicken is no exception and when cooked on a grill with a delicious brown sugar BBQ sauce, you just can’t lose. 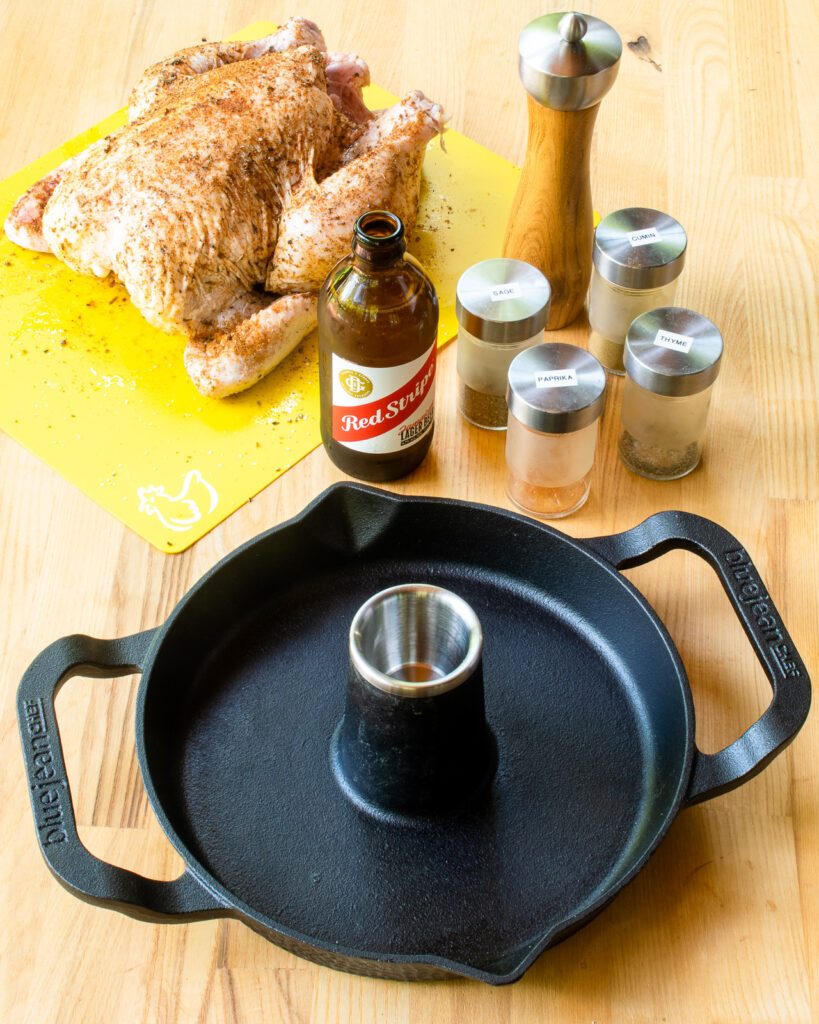 Beer can chicken recipes used to involve opening a can of beer, placing a chicken on top of the open can and placing it all on the grill. The beer gets hot and steams the inside of the chicken while the rest of it cooks from the radiant heat surrounding it, producing a very moist roast chicken. While this might have been fun in a camp setting, it has several drawbacks. First, there was the concern that the beer can would tip over, spilling the beer and sparking a fire. There is also the trouble of the chicken drippings – as they drip down into an open grill, they also flame up. Finally, there was the issue of over-browning (read: charring) the chicken, or at least the legs which are closest to the heat. A vertical chicken roaster, specifically a cast iron vertical chicken roaster solves all those problems. With this pan, the chicken is stabilized and can’t tip over, the base catches all the drippings so they don’t flame up and it also protects the chicken from the direct heat of the grill so that it browns evenly without charring. The cast iron can handle the high heat of the BBQ and the wide base of the pan also gives you the option of roasting vegetables around the outside. 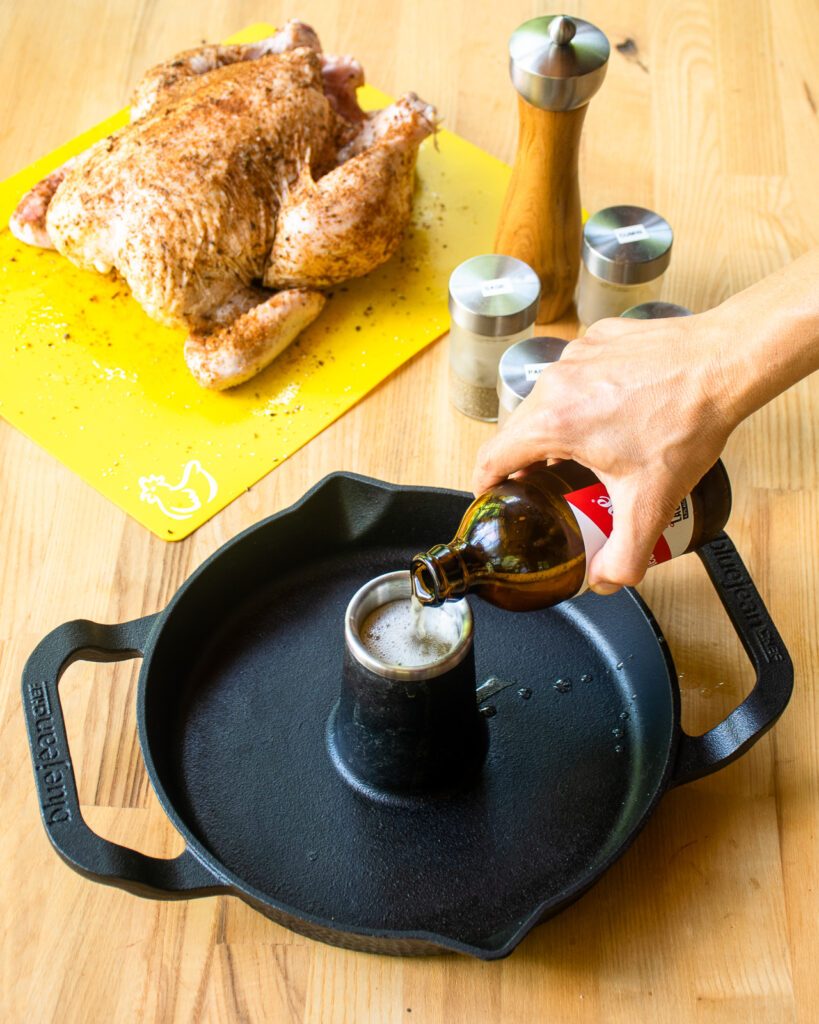 Beer Can Chicken in the Oven

You don’t have to put the vertical chicken roaster on a grill, however. You can absolutely roast a chicken vertically in your oven – you just might have to remove a rack so there’s room for the chicken to stand up. Pour a little beer into the center cavity of the roaster – you don’t need a full can which is nice because you probably have a glass in your kitchen too! Then, roast the chicken in the oven at 400˚F for 60 to 90 minutes, depending on the size of your chicken. Wait for an hour before you baste with the BBQ sauce and then continue to roast until the internal temperature is 165˚F on an instant read thermometer. 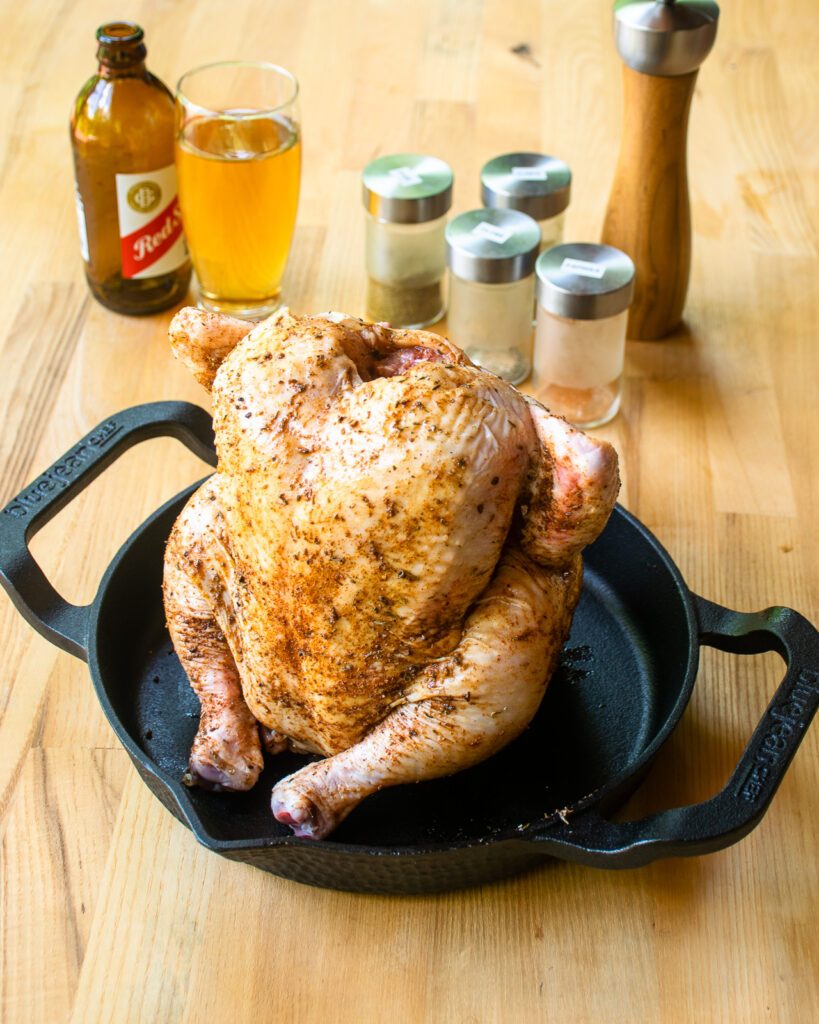 This recipe for BBQ Beer Can Chicken starts with a spice rub that gives the chicken a great flavor and helps to brown the chicken as well. Rub the chicken with a little oil and then add the spice rub. You can do this a day ahead of time if you like, but you don’t have to. 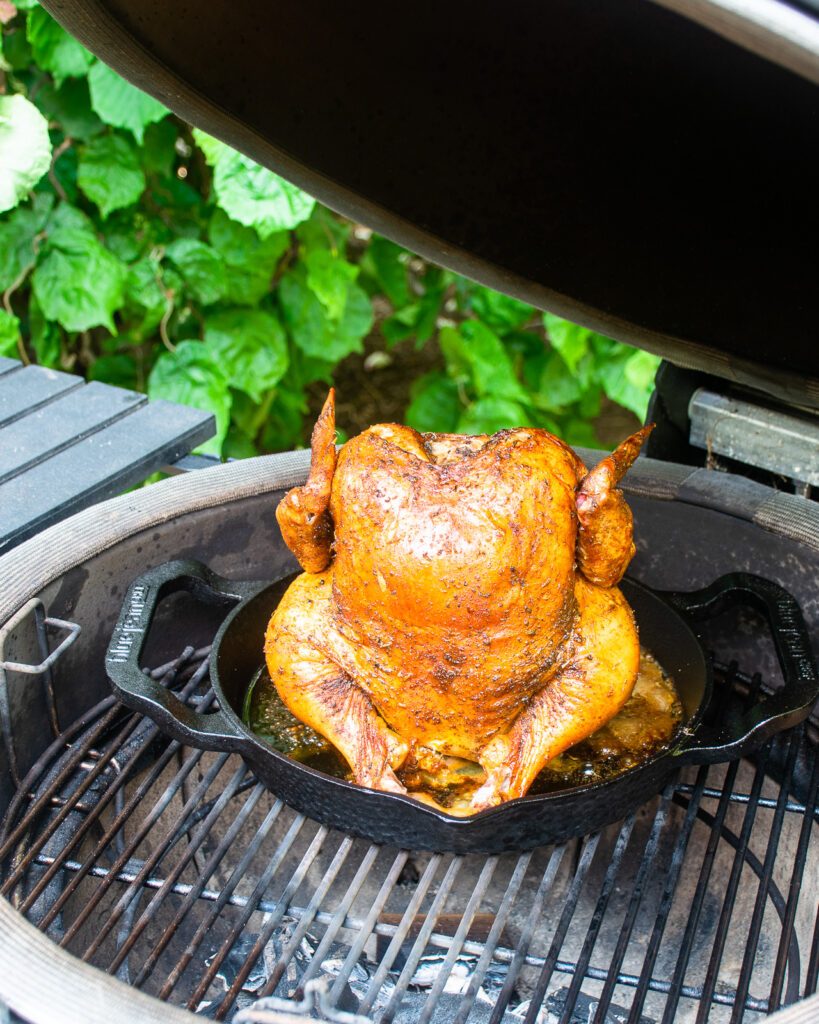 Beer Can Chicken on Charcoal Grill

The key to making this chicken on a grill (charcoal or gas) is to create a section of indirect heat on your grill. You can do this on a gas grill by turning off one of the burners. On a charcoal grill, move the coals to one side, so one side of the grill is hotter than the other. The other really important key to making this chicken on the grill… and this one is hard… is not to open the lid for the first 30 minutes. Get your grill to register around 400˚F and when it is stable at that temperature, place the chicken over the indirect heat section, close the lid and leave it alone. Don’t lift the lid. Have faith. It will be ok. After 30 minutes, you can give it a check, but make it quick. Close the lid again and let the chicken go for another 30 minutes before basting and letting it finish cooking. 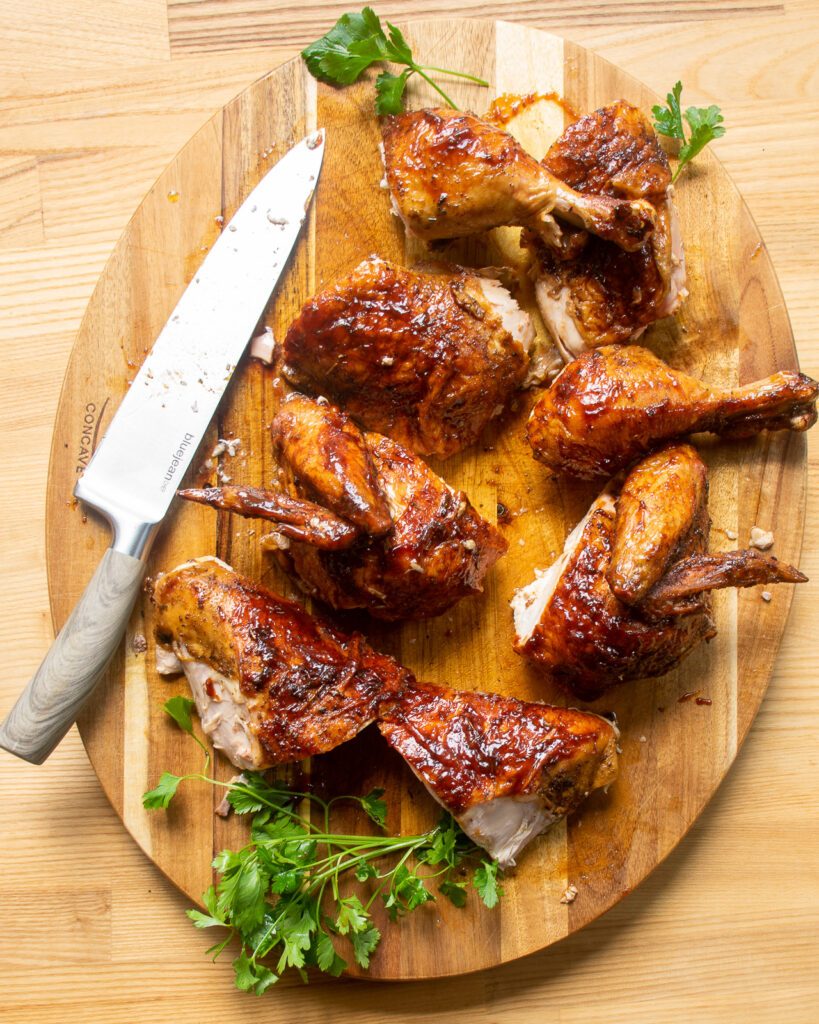 While you’re not opening the lid to your grill, you have time to make the brown sugar BBQ sauce. It’s a quick and easy, dump-and-stir recipe made on your stovetop. It will smell delicious and you have an hour to make it. Because the sugar in the sauce can burn easily, you only baste the bird after it has been cooking for an hour. Then, mop it on and let it caramelize a little more while the chicken finishes cooking. 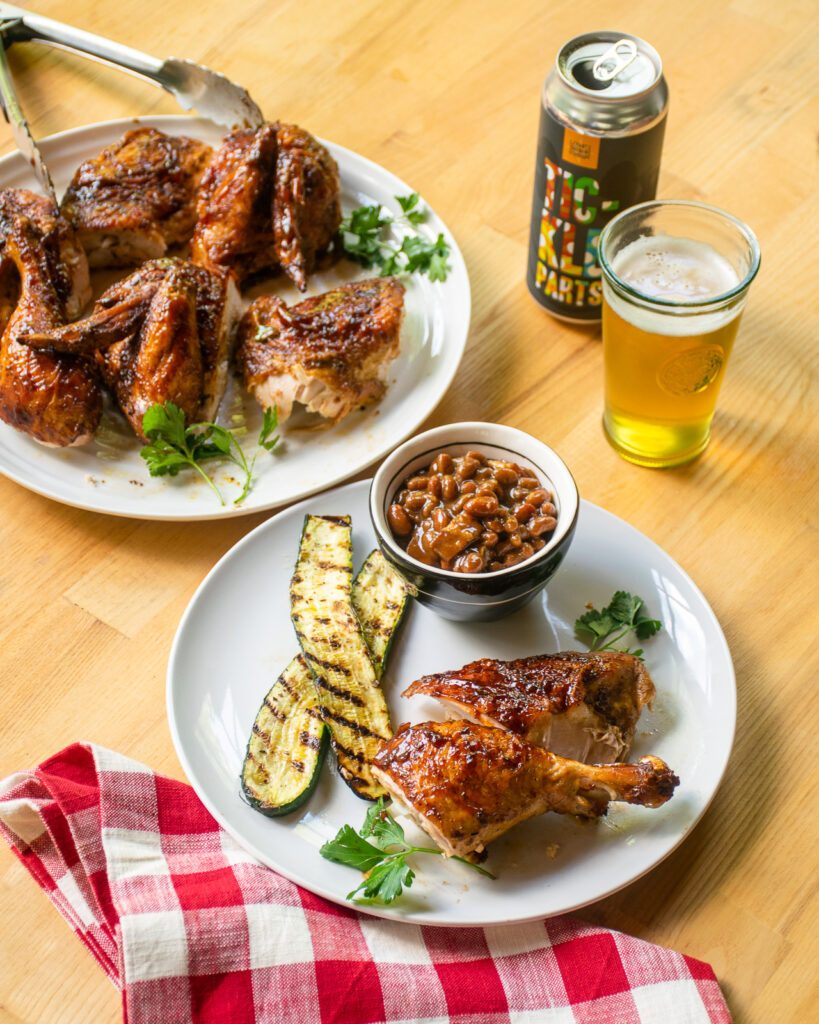 What to Serve with Beer Can Chicken

There are endless possibilities to serve with this BBQ Beer Can Chicken, but since you’re out at the grill, why not grill some vegetables? This Grilled Parmesan Corn and Zucchini dish would be perfect, or a Grilled Panzanella Salad would be a delicious accompaniment as well. If you don’t want to use the grill, a crock of Baked Beans out of your pressure cooker would fit the bill too. Of course, there’s the beer from the rest of the can too…

How to Carve a Chicken

Once you've roasted your chicken, it's time to cut it into serving pieces. It's not hard and you can use...View Technique

Hello! All photos and content are copyright protected. Please do not use our photos without prior written permission. If you’ve made this recipe and would like to share it with your friends, please link back to BBQ Beer Can Chicken on Blue Jean Chef. Thank you!