With a name like Chocolate Eton Mess, no one should ever feel intimidated to make this dessert. You can't really "mess" it up... at least not more than it is intended to be messed up!

What is Eton Mess?

This Chocolate Eton Mess recipe is a relatively simple dessert made up of broken chocolate meringue, berries and whipped cream. It’s a layered (sort of) dessert similar to a trifle, but as its name implies, it doesn’t require too much care in putting those layers together. Eton mess originated in England at a boy’s boarding school in Berkshire called Eton College, one of the most prestigious boarding schools in England to this day. Supposedly, this was served at a cricket match between Eton and Harrow, another British boy’s school. I, however, prefer to think of Eton mess as originating when a cook broke their pavlova and decided to improvise by breaking up the meringue even more and just throwing everything together, but I’ll never know.

What I do know about Eton mess is that it’s easy to make and fun to put together. With a name like that, the cook as absolute freedom to make this any way he or she likes and can never fail. So let’s jump in with reckless abandon! 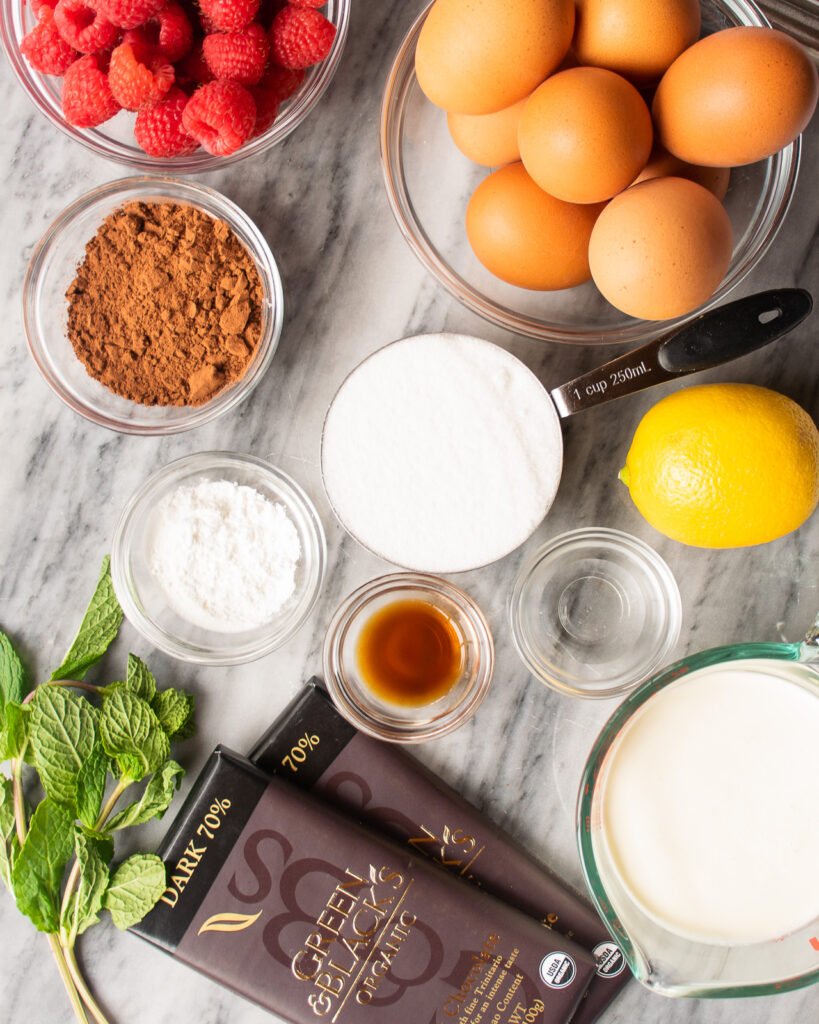 The only thing you really have to make for Eton mess is the meringue and it is very simple. A meringue is basically made of beaten egg whites and sugar. When you make a pavlova, you add a little vinegar and cornstarch to stabilize the egg whites and give the pavlova a marshmallow-y texture inside. You’ll whip the eggs whites for quite a while, so grab a hand mixer or stand mixer for this job. The egg whites need to get to stiff peak stage. The good news is that once you’ve started to incorporate the sugar, you can’t really over-mix the egg whites, so keep going until the egg whites stand up tall when you pull the whip or whisk out of the egg whites and  invert it in the air. If you’re in doubt, beat it some more. 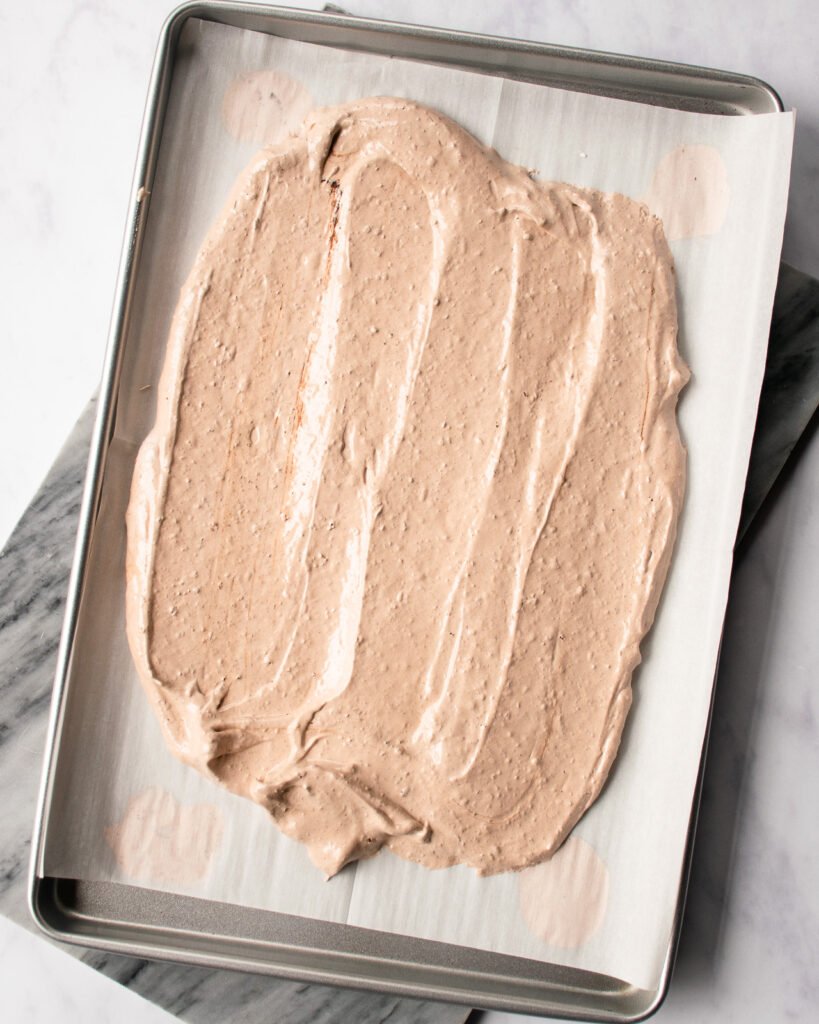 Tips for Baking a Pavlova

Remember the name of our dessert? It’s a mess! So, again you have freedom here to spread your chocolate meringue out on a baking sheet in any shape you like. I always use a piece of parchment paper on the baking sheet so that the meringue is super easy to remove. The best tip I can give you for this stage is paint a little meringue on all four corners of the baking sheet to glue the parchment paper down – that makes it much easier to spread the meringue out on the paper. Spread it out to a thickness of about an inch and send it to the oven to bake for an hour. Then, turn the oven off and let the pavlova sit in the turned off oven for another hour. 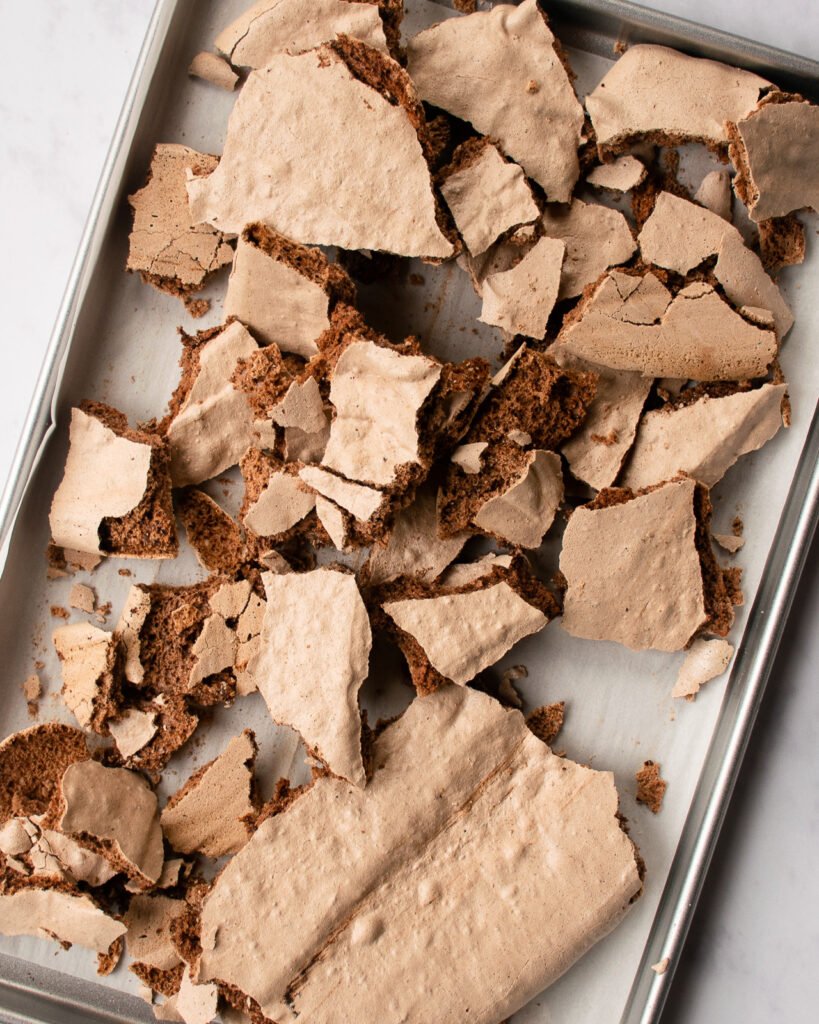 While you can’t really make the complete Eton mess too far in advance, you can make the pavlova component ahead of time or even the day before. Just remember to store the meringue pieces in an airtight container. Moisture and humidity are the enemies of meringue, so leave it at room temperature in that airtight container and try not to snack on it! You can also prepare the berries for Eton mess ahead of time, letting them macerate in sugar with a little lemon juice, but I would only do that a few hours ahead of time. As for the whipped cream, you do need to whip the cream as close to when you’re building the mess as possible. If it’s really not convenient to wait until after dinner and before dessert, whip the cream before you sit down to eat and keep it in the refrigerator. Give it a few good whips before you start to build.

If you do need to build the messes a little in advance, that’s ok. The meringue will start to soften a little as it absorbs moisture, but it will still be delicious. It can handle sitting on the counter for 30 to 60 minutes. 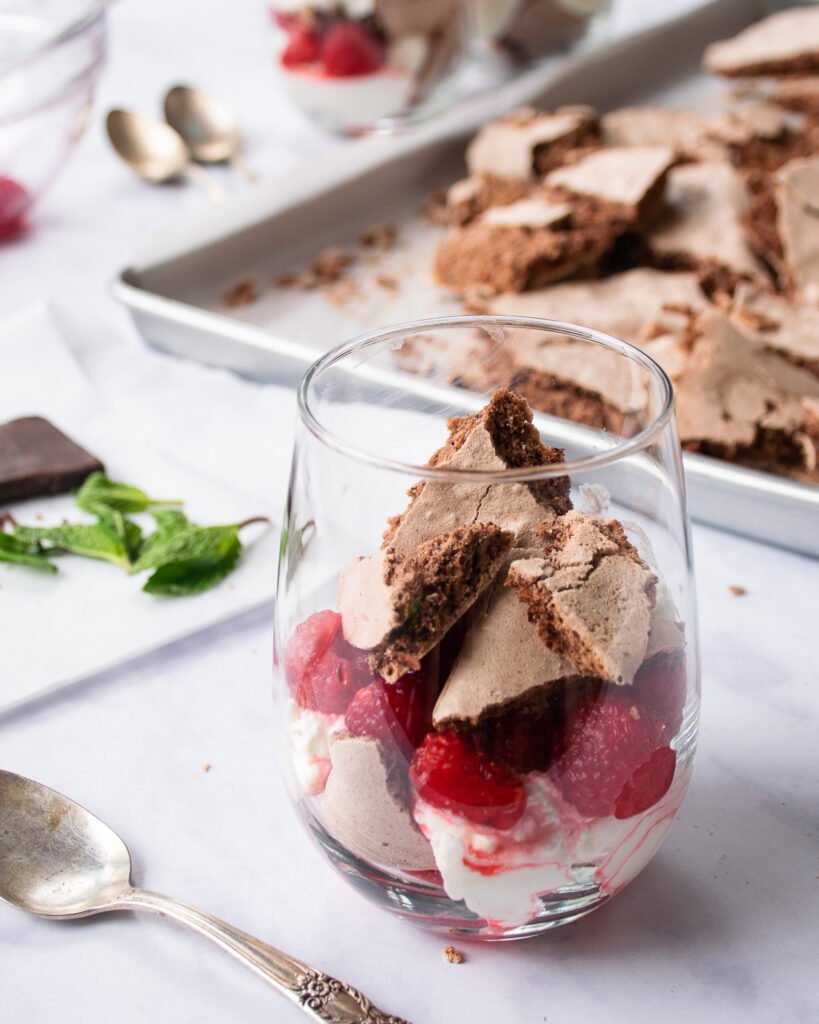 How to Serve Eton Mess

As with most layered desserts, it’s nice to serve Eton mess in glasses or glass dishes so that you can see all the pretty layers. Stemless wine glasses are perfect. I like to make two complete layers in the glass or dish and let the syrup from the berries drip down into the cream and meringue. 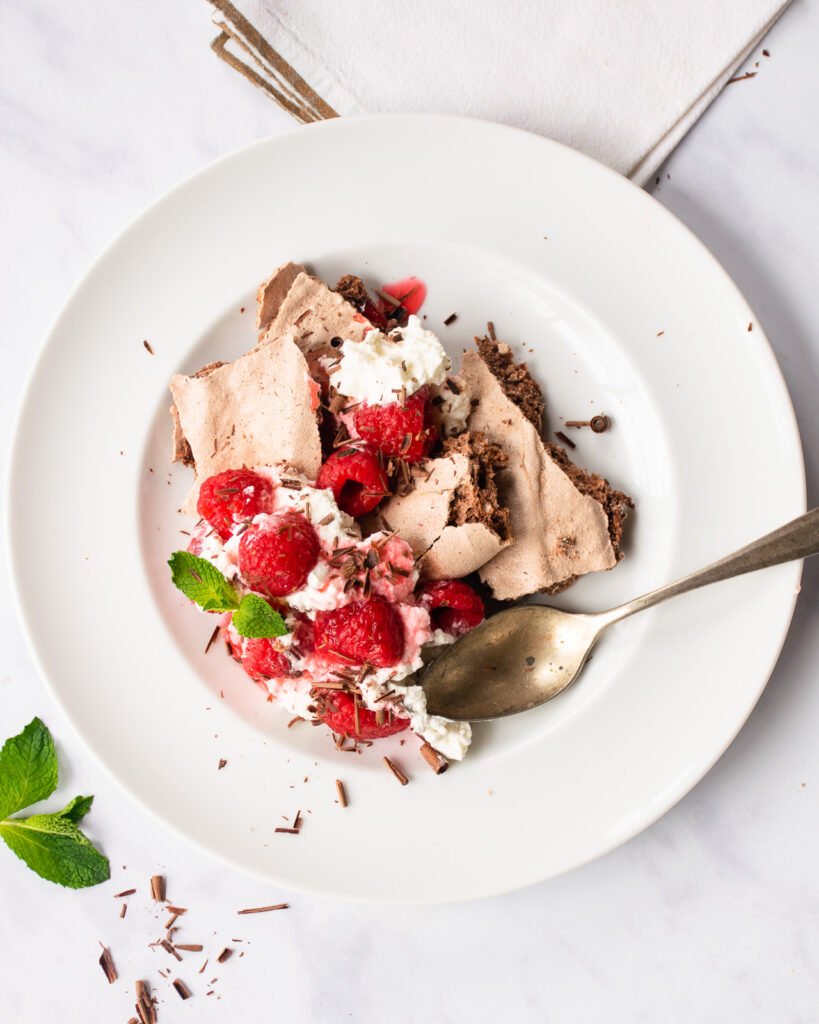 If you don’t have glasses or glass dishes to serve up the mess, go with a plate. Remember, it’s supposed to be messy so you have free roam to do as you wish and say that you meant it! 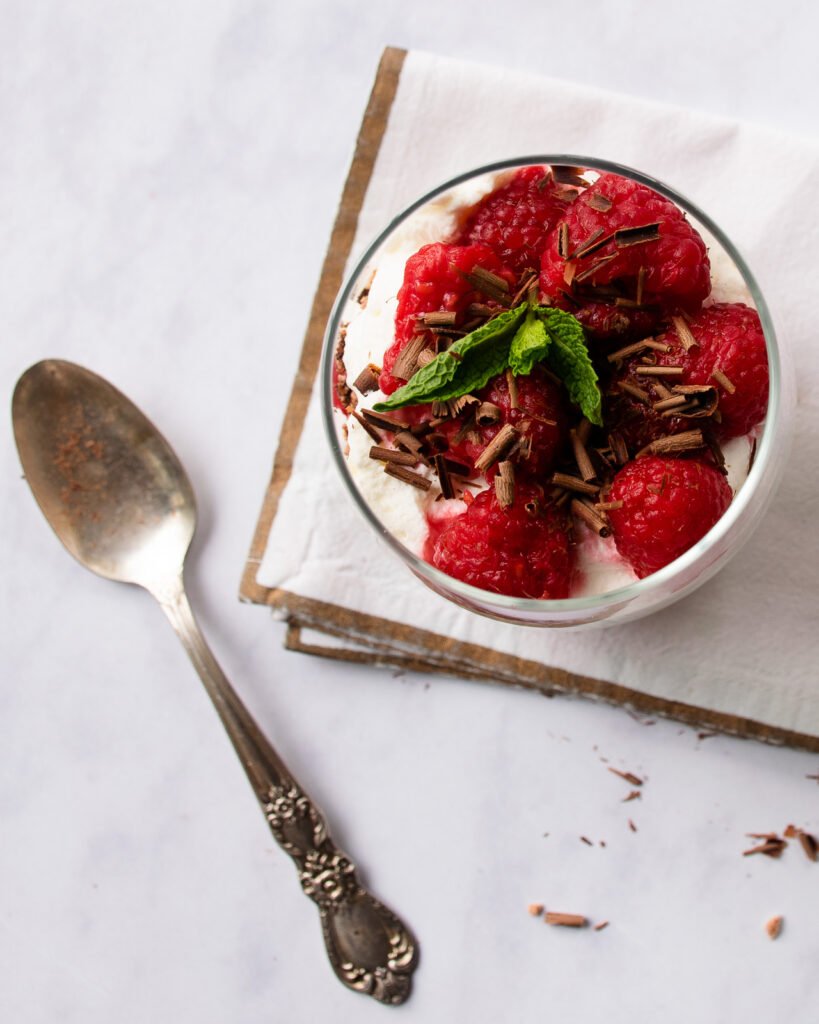 Now, if you know me, you’ll know that I can’t resist chocolate, so this version of Eton mess starts with a chocolate meringue and uses raspberries as the fruit – perfect for Valentine’s Day. It’s not traditional, however. Eton mess is usually made with a plain meringue, cream and strawberries, but there’s nothing saying you need to stick to tradition. You can make any flavor of meringue and use any berries or fruit as the layers. Try mixing berries together, or use banana, or lemon curd. The options are wide open.

More good news… Eton mess is gluten free! That means that it’s a safe dessert to serve to all your gluten-free friends. If they are not eating gluten because they aren’t eating carbs, they should make an exception for this sweet treat. After all, coming to your house for dinner is a special occasion!

Hello! All photos and content are copyright protected. Please do not use our photos without prior written permission. If you’ve made this recipe and would like to share it with your friends, please link back to Chocolate Eton Mess on Blue Jean Chef. Thank you!