How to Cook Pasta in a Pressure Cooker

It's not hard to cook pasta on the stovetop, but cooking pasta in a pressure cooker does have a couple of benefits that might just make it worthwhile for you.

Let's turn the pressure up!
Advertisement - Continue Below

Why Cook Pasta in a Pressure Cooker?

Great question! We all know that cooking pasta on the stovetop is an easy task (to learn all about how to cook pasta properly, check out this page and video), but it does require that you pay attention. Pasta has a tendency to foam as it boils and every home cooks has cleaned up after a starchy pasta boil over at some point in their cooking life. When you cook pasta in a pressure cooker, you don’t have to watch it or monitor the heat underneath the pot. It cooks quickly and unattended in a pressure cooker. Also, you can cook pasta directly in a sauce in a pressure cooker, which saves you having to do one more step in a recipe and one more pot to clean up.

I would be remiss if I didn’t tell you, however, that there are disadvantages to pressure cooking pasta. With the lid locked onto the cooker, you won’t have the ability to check the progress of the pasta to know definitively when it is cooked to you liking. That said, you can get pretty close if you follow the instructions and tips below. 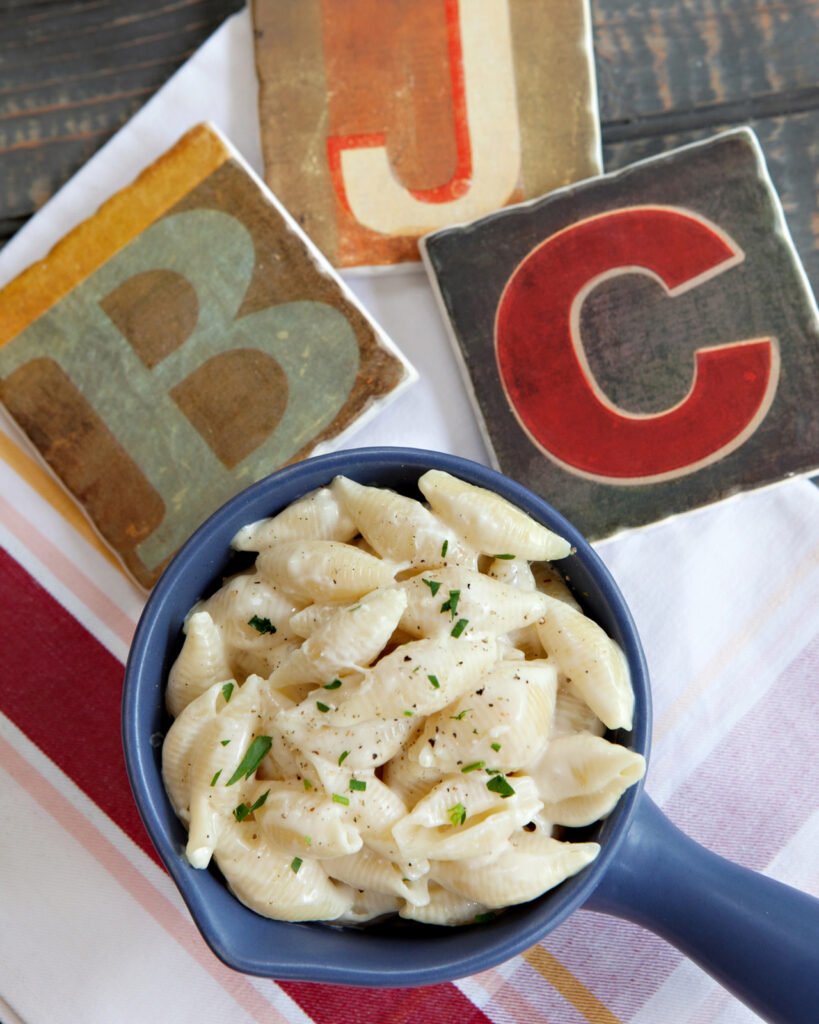 How to Cook Plain Pasta in a Pressure Cooker

I am going to tell you how to cook plain pasta in a pressure cooker, but I need to make a couple of disclaimers first. The most important thing to remember is that there are a huge number of different brands of pasta in existence and they are not all created equal. What works for one brand might not be exactly the same for another brand, even if they are the same shape. Also, different shapes of pasta tend to cook differently too, so what works for macaroni might not be exactly right for fusilli. Still, for the most part, unless you are super picky about your pasta, the rules and ratios below will work for most pasta shapes and brands. Here’s the general ratio to use:

Most pasta shapes can be measured in a measuring cup. If, however, you are attempting to cook long pasta like spaghetti you will need to break that pasta in half (I know this is sacrilegious to most Italians and I understand!). Generally, there are about 4 cups of pasta per pound, so if using a whole pound of spaghetti which won’t fit into a measuring cup, assume that it is 4 cups and add 4 cups of liquid.

It’s important to understand that when you are pressure cooking, liquid means water or stock. Strained or puréed tomatoes or marinara sauce does NOT count as liquid.

Salt and fat are somewhat optional (but not really). If you’re on a low sodium diet, I will allow you to not add salt to the pasta water. If you are not, however, it’s very important to season the water well so that your pasta is seasoned well as well. The fat added to the pot is to help limit the amount of foam produced by the pasta. The fat will rest on the surface of the water and minimize the foam which could potentially interfere with the pressure valves. I think that’s very important, so not really optional.

With respect to timing the pasta, there is another general rule to follow. This is where your personal preference comes into play, however.

Lowest suggested cooking time on pasta package instructions rounded down to closest even number, divided in half, minus 1 OR 2 minutes.

If you are someone who really likes al dente pasta, subtract 2 minutes. If you’re not picky about your pasta and like it a little softer, subtract only 1 minute. For example, if your pasta package cooking instructions say 13 to 15 minutes, take the lower number (13 minutes) and round down to the nearest even number (12 minutes), divide it in half (6 minutes) and subtract 1 OR 2 minutes (4 or 5 minutes). So, you would set your pressure cooker for 4 minutes if you like your pasta al dente, or 5 minutes if you like the pasta a little softer. 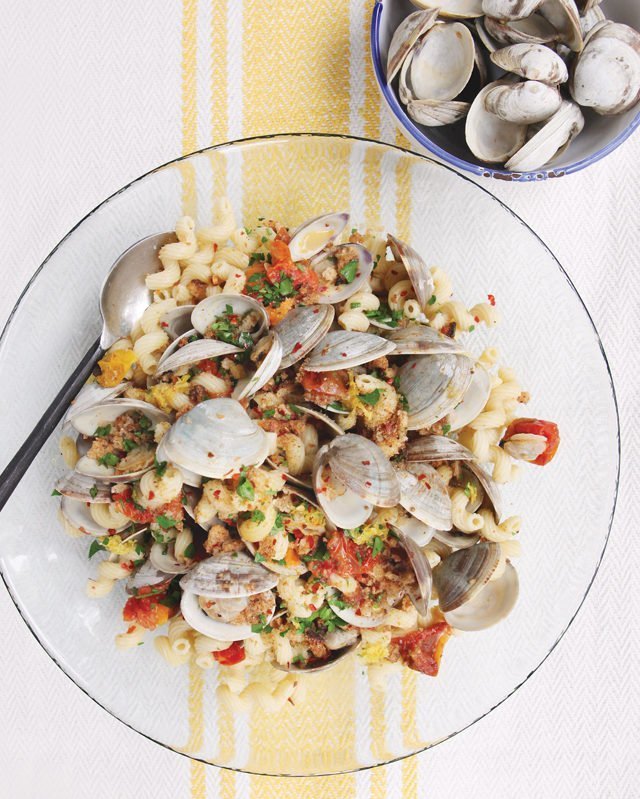 What Pressure Release Method to Use for Pasta

I use the quick-release method to release the pressure inside the cooker. Many people don’t like this method for pasta because starchy water can spit out of the pressure release valve. I solve this by simply draping a kitchen towel over the release valve to catch any water spurts. To me, it is more important to maintain control and stop the pasta cooking as quickly as possible. Once the pressure has been released, remember to drain away any remaining water from the pot. 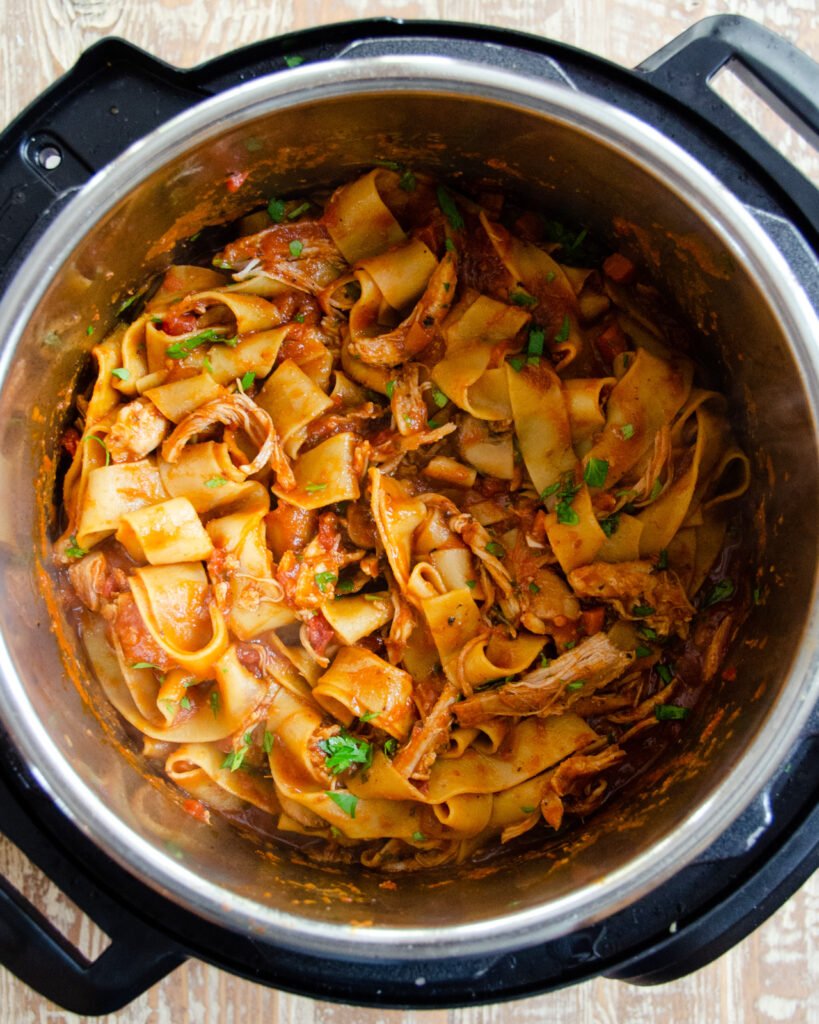 How to Cook Pasta in a Sauce in the Pressure Cooker

My preferred way to pressure cook pasta is directly in a sauce (usually one made in the pressure cooker). In this case, there should already be some liquid in the pressure cooker, but it’s not enough to cook your pasta as well as leave you with a sauce. You need to add more liquid to the cooker so that the pasta has something to absorb and so that your sauce doesn’t burn as it does so. How much liquid to add is the question. Here’s the answer:

There’s no need to add fat to the cooker because the pasta sauce will prevent the pasta from foaming. You also shouldn’t need to add more salt because your sauce should be seasoned to your liking and that sauce will season the pasta. 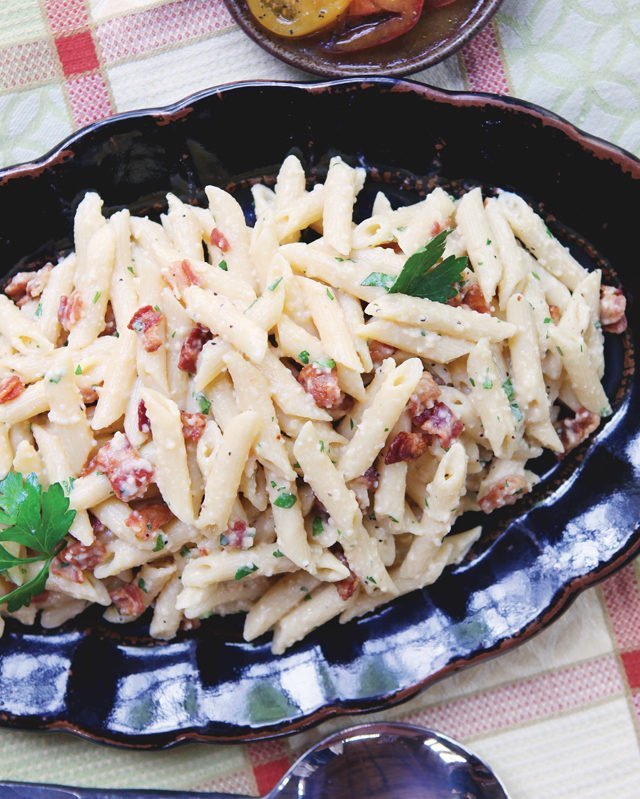 What Type of Pasta Can Be Used in a Pressure Cooker?

The best pasta to use is the best pasta, and this is especially true in a pressure cooker. As I mentioned before, pasta brands are not all equal in quality. Really good pasta has two big advantages beyond the fact that it just tastes better – it won’t fall apart when you cook it and it doesn’t foam as much as lesser brands. If you’re wondering how to choose a good pasta, check out this page which has lots of tips for buying and cooking pasta.

Short shaped pasta is easier to cook in a pressure cooker because it fits in more easily. You can cook long pasta in a pressure cooker, but you will have to break it in half and this hurts the hearts of many Italian cooks. If you’re not Italian, close your eyes, break the pasta in half, put it in the pot and tell no-one what you’ve done. 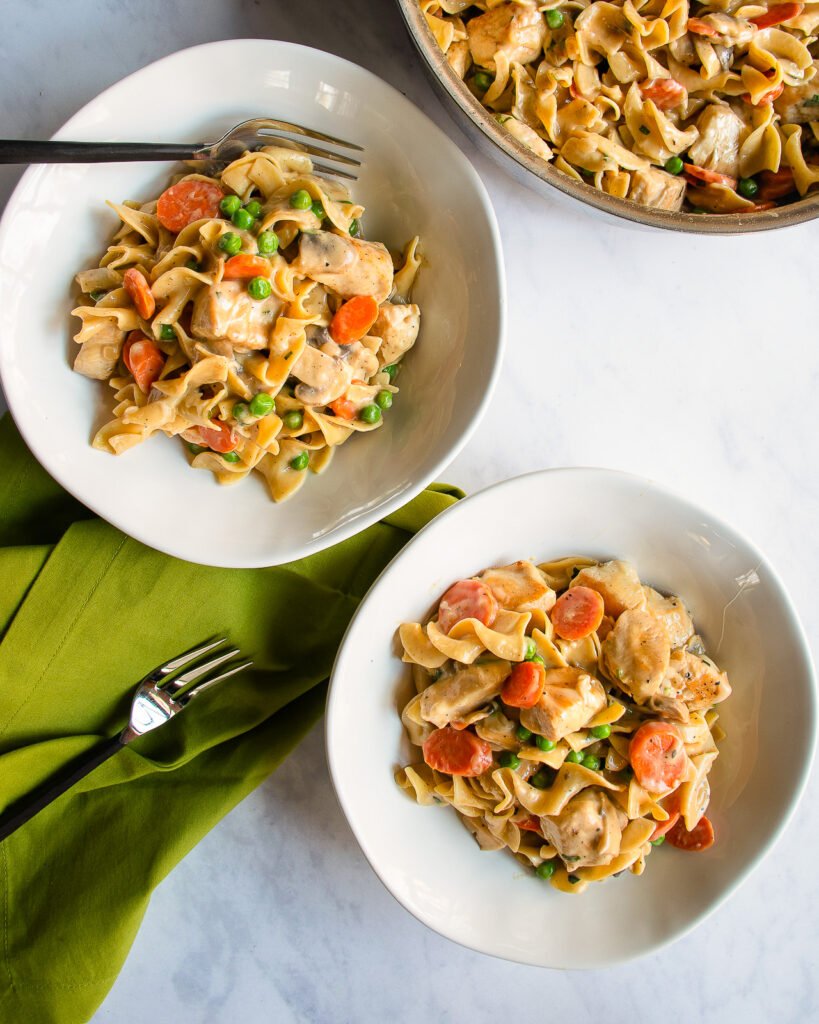 Tips for Cooking Pasta in your Pressure Cooker or Instant Pot®

Rigatoni with Italian Sausage and Artichokes

This rigatoni with Italian Sausage is one of my favorite pasta recipes! All in all, it's a perfect combination of...
View Recipe

Quick and Easy Mac and Cheese

This is truly a one-pot mac and cheese recipe that couldn't be easier. Be sure to measure the water because...
View Recipe

This is one of my most popular pressure cooker pasta recipes. It's similar to what many Americans from the northeast...
View Recipe

All Pressure Cooker
Advertisement - Continue Below