How to Peel and Devein Shrimp

It's true that shrimp cooked in their shells have more flavor than peeled shrimp, but unless you're having a casual get-together and are prepared for your guests to peel their own, you'll probably have to peel and devein the shrimp yourself. It's not hard to do, but it is an added step so just be prepared to add ten minutes or so to the prep time.

Grab your paring knife and let's get started!
Advertisement - Continue Below

I generally prefer to buy shrimp still in their shell and peel and devein them myself. Shrimp in their shell tend to be higher quality than those that come peeled and deveined because they haven’t been handled as much, plus you can use the shells for a seafood stock to flavor soups or stews. Just keep the shells in a bag in the freezer until you’re ready to use them.

Before you start peeling shrimp, decide how much of it you’d like to peel. Will you be keeping the tail on or removing it? Leaving the tail on does make for a prettier presentation, but your guests will have to remove the tail themselves. I generally like to leave the tail on. Start by holding the shrimp at the last segment before the tail. This will ensure that you don’t pull the tail off by accident. Then, pull the rest of the tail off working from the underside of one side of the shrimp where the legs are and pull around the shrimp to the other side. 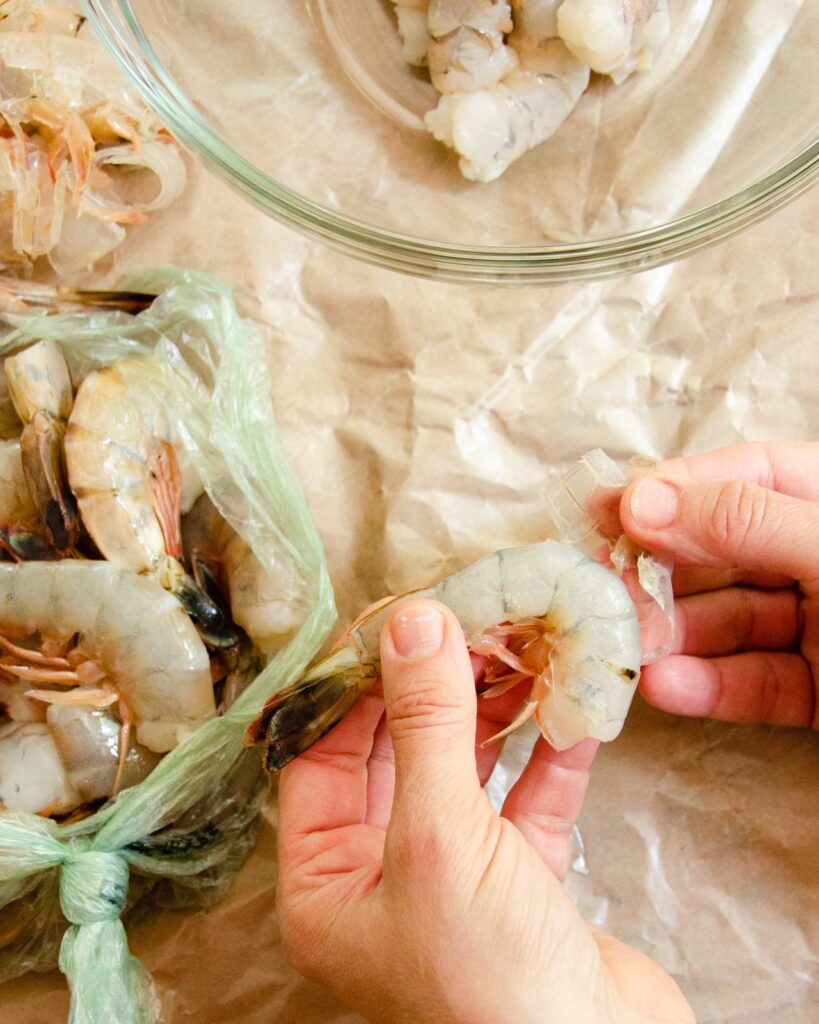 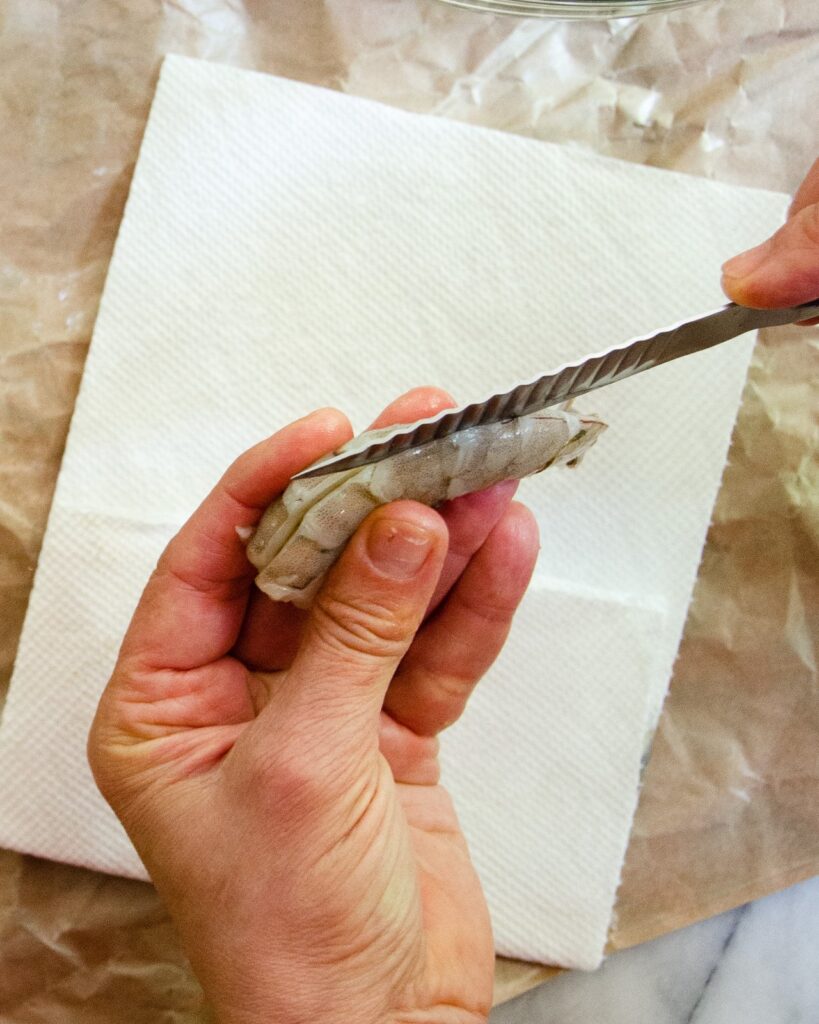 Then, using your paring knife, remove the intestine and wipe it on the paper towel. 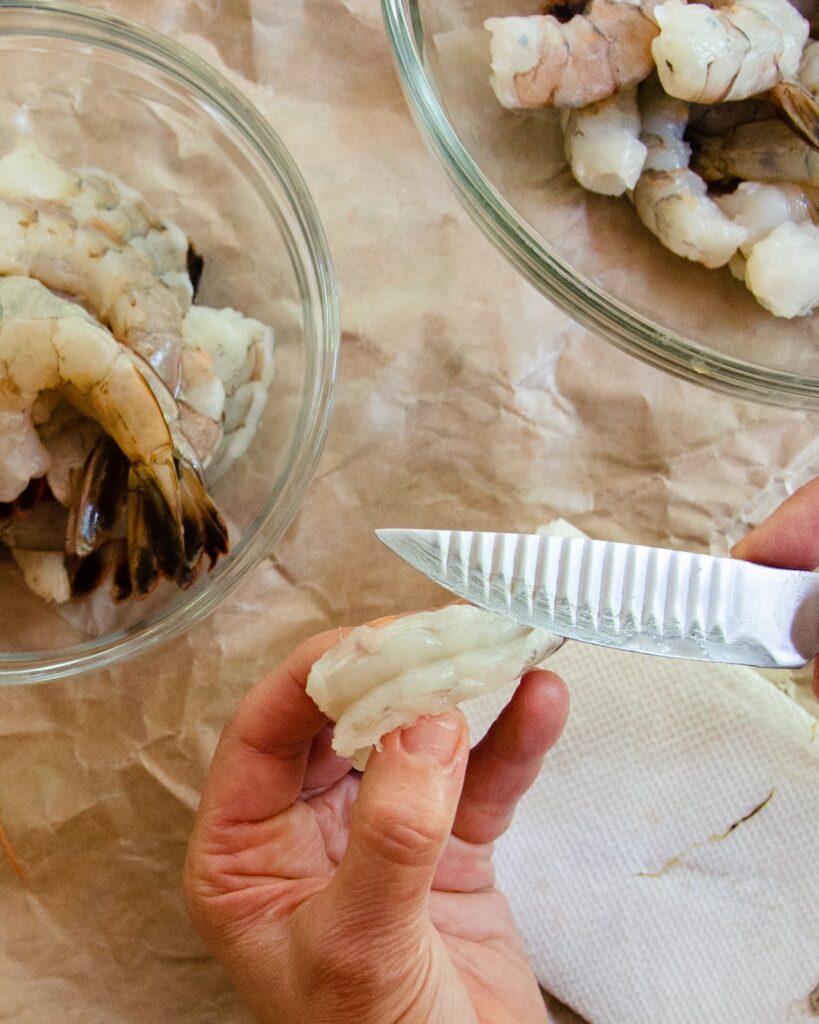 There is one more step to properly peeling shrimp that is not always mentioned. It’s helpful to remove the “law suit fin” from the tail. In the middle of the tail there is one very sharp and pointed fin that no restaurant wants its patrons to encounter (hence the name!). Simply pull that fin backwards and remove it so that there is nothing sharp that could prick your guests when they handle or eat the shrimp. 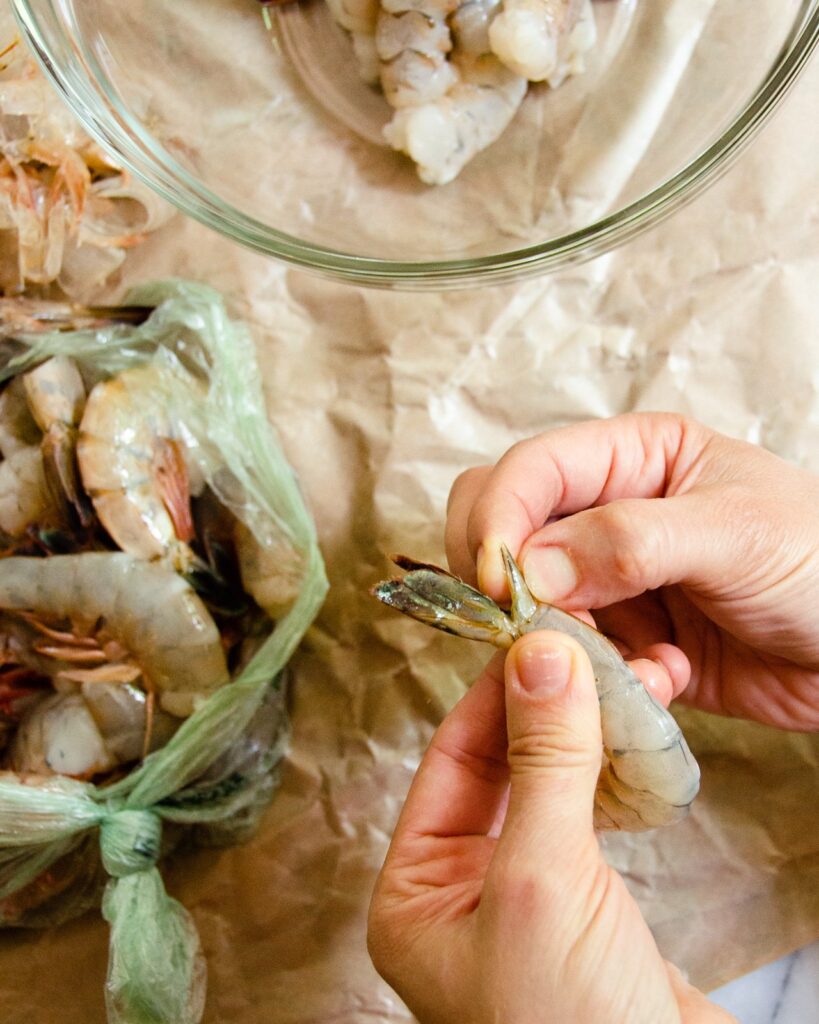 Then your shrimp are ready to go! Make a couple meals that involve shrimp and you’ll be an expert – practice makes perfect, after all!

Shrimp Cocktail is a slam dunk appetizer at any party - it draws people to the buffet table every time....
View Recipe

This grilled shrimp and citrus salad could be an elegant starter course for 6 to 8 people, or a main...
View Recipe

Jumping on the ever-popular avocado toast craze, Edamame Avocado Toast with Grilled Shrimp another delicious option for a quick and...
View Recipe

I don't often deep-fry at home for so many reasons, so I wasn't about to make bang bang shrimp in...
View Recipe