How to Cut Fennel

Fennel is a vegetable that often baffles the home cook. It has a bulb at the bottom, several stalks protruding from it and lots of fragrant thin fronds on each stalk. Cutting fennel can be a lot like cutting an onion, but you do need to know where to start.

Let's get started!
Advertisement - Continue Below

The rules for cutting vegetables are always the same.  First of all, try to create a flat surface with your first slice so that you can be safe when cutting the rest of the vegetable. Secondly, think about how the vegetable is constructed or what sort of seeds or core are inside.

With fennel, the first step is to separate the stalks and fronds from the bulb. Simply slice the stalks off. You can save the stalks which are full of flavor for a stock (especially seafood stock) and the fronds are delicious tossed into a green salad or used as a very pretty garnish. Slicing the stalks off will give you your first flat surface.

Next, remove as little of the base of the bulb as possible. You’re just trying to remove the browned edge of the fennel. Now you have TWO flat surfaces to the fennel bulb. If the outer leaves of the fennel bulb are in rough shape, pull them off and remove them. The only trouble with this is that you end up removing a lot of the fennel (mostly for cosmetic reasons), so instead you could use a vegetable peeler to remove any browned or bruised sections on the outside of the bulb.

Fennel, while it does appear different from most other vegetables, is built in a similar fashion to an onion – layers held together by a core. The main difference is that the core of fennel is quite a bit bigger than that of an onion. We’ll use the core of the fennel to hold everything together while we cut it and then slice or dice it as well since it is entirely edible.

You can serve fennel braised or roasted (or even grilled). If that’s your plan, cutting the bulb into wedges is the way to go. Place the fennel stalk-side down on the cutting board and cut it in half through the core, cut each half in half and then cut each quarter in half, but always make sure you are cutting through the core evenly so that a piece of the core always remains with each wedge to help hold it together.

If you want to dice the fennel bulb, place the stalk end down on the cutting board and cut it in half through the base end to the stalk end across it’s narrowest width. Then, follow the instructions for dicing an onion here. 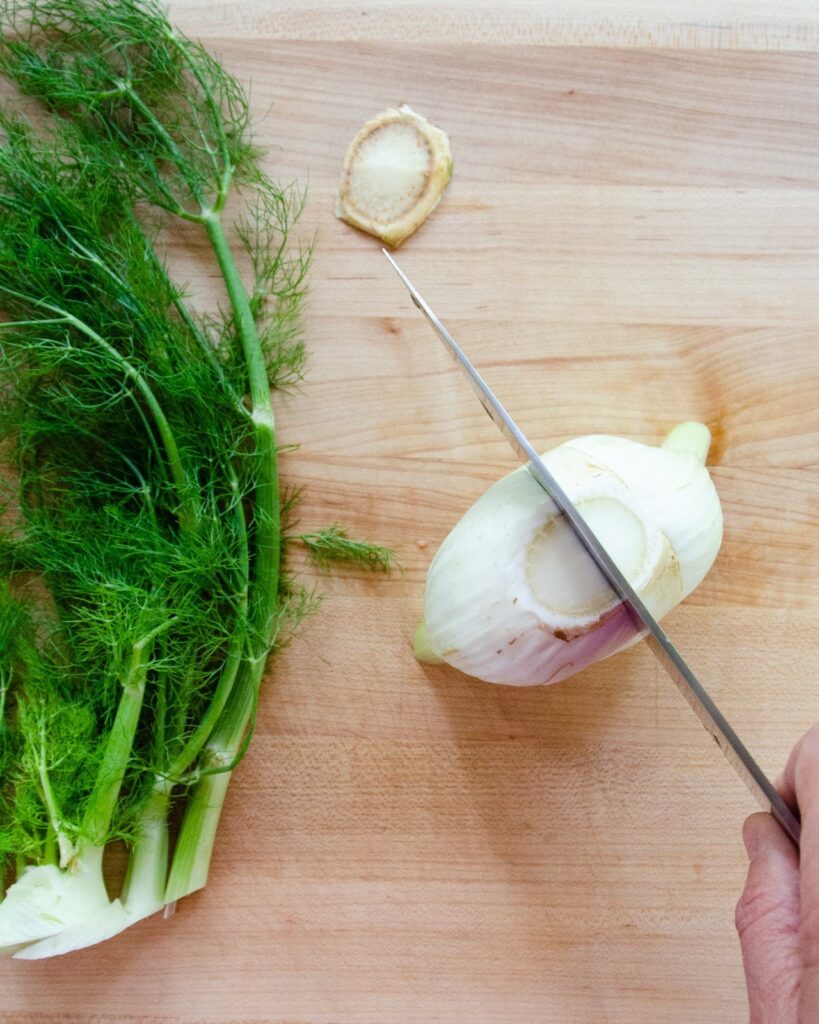 To slice the fennel, you have several options. You can place the half fennel bulb down on the cutting board with the stalk end closest to your knife blade and slice down across the bulb. This will give you round boomerang shaped slices. 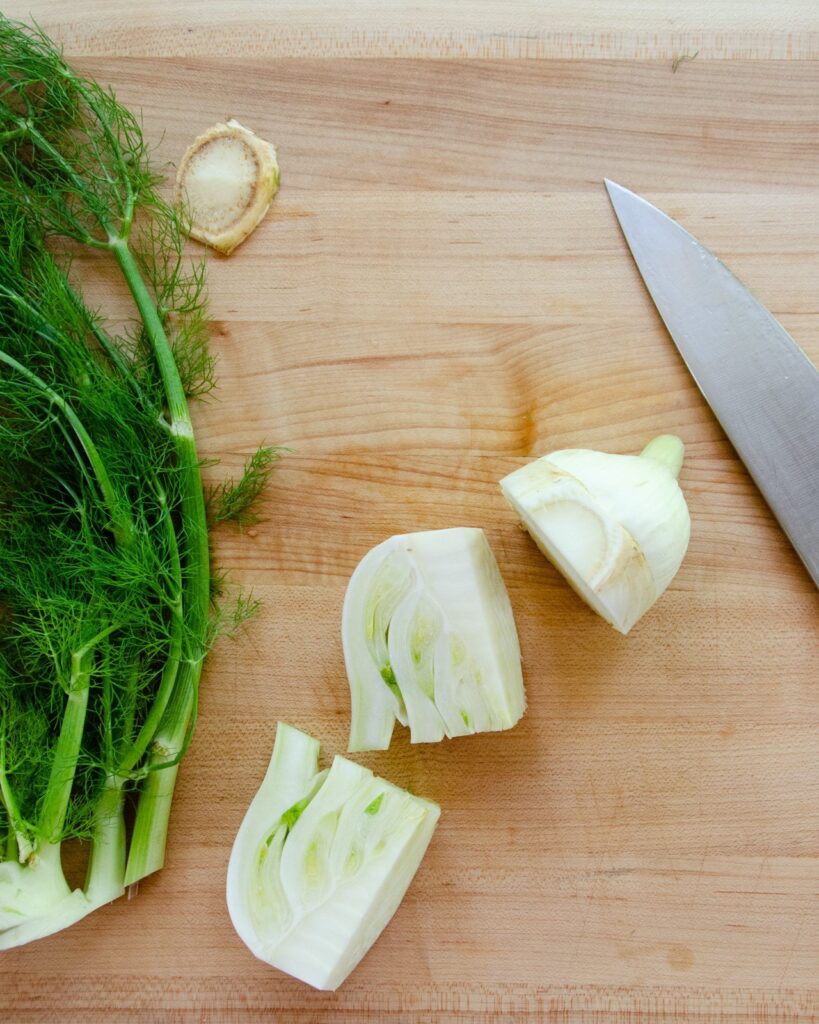 If you’d prefer straighter slices of fennel, cut the halves of the fennel bulb in half again to make quarters. Turn the quarter on its largest flattest slide and slice down from base to stalk. 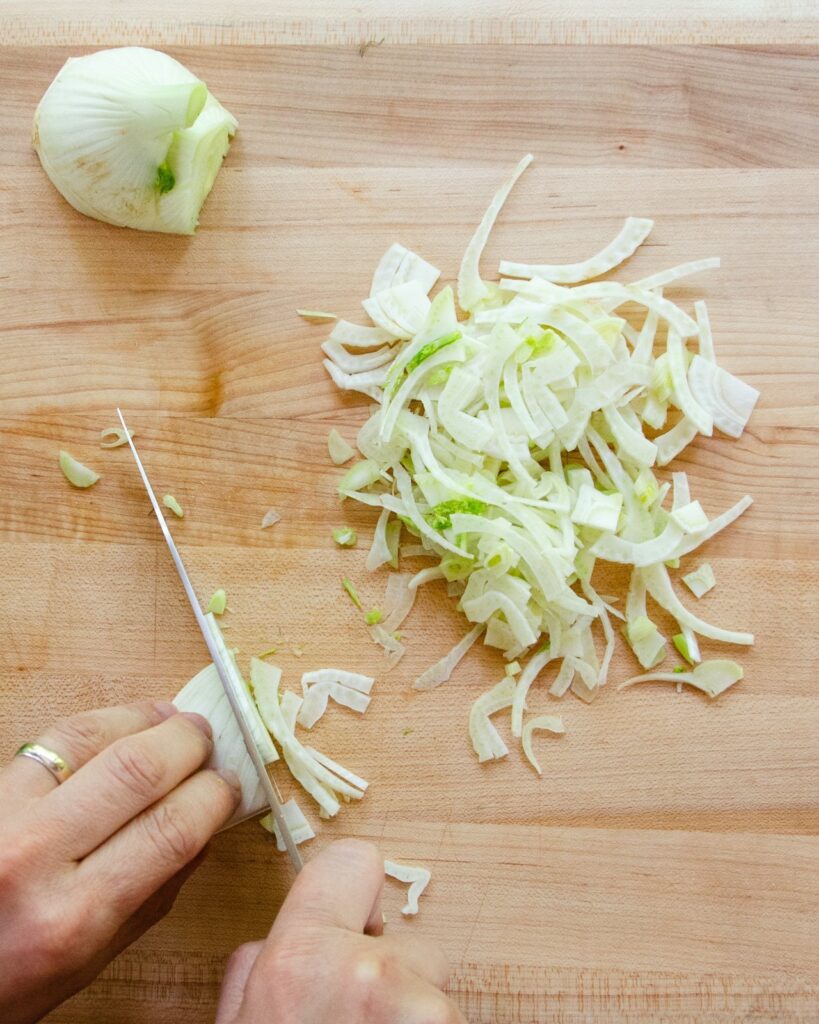 Fennel is a delicious vegetable with a mild anise flavor. It’s delicious raw in salads, or simmered in soups or stews.

This grilled shrimp and citrus salad could be an elegant starter course for 6 to 8 people, or a main...
View Recipe

I'm a big fan of puréed soups and this sweet potato soup with its beautiful color really shows off what...
View Recipe

Black cod is also known as sablefish or butterfish. It’s not actually part of the cod family and not similar...
View Recipe

Even though this recipe is just as much about beans as cauliflower, I think of it as one of my...
View Recipe