This cauliflower Cheddar soup is a hearty soup with a note of elegance. The dukkah on top - simply a toasted nut and seed mixture - brings a lot of flavor and distinguishes this soup from the everyday.

Sometimes you want a bowl of soup, but you only want enough for one or two people and only for just today… not for 6 people for a week! So, here’s a recipe for a meal-sized portion of soup for 2, made in a 2-quart pressure cooker. Of course, if you DO want soup for 4, 6 or even 8 people, you can very simply just double, triple or quadruple the recipe and it will work fine. The cooking time stays the same. 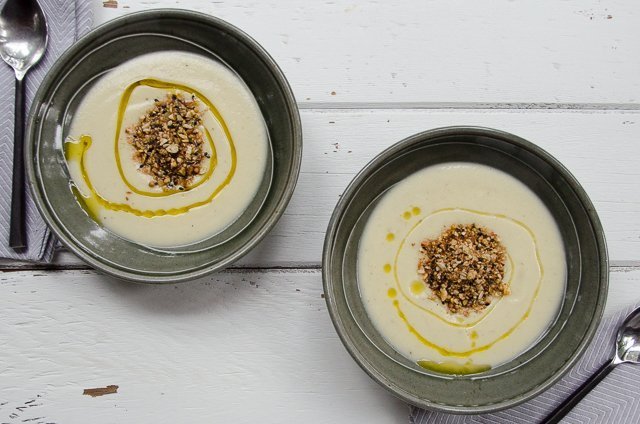 Now, don’t give up on this recipe because you’ve never seen the word “dukkah” before! Dukkah is simply a mix of toasted nuts, seeds and spices (that’s pretty simple!) and it adds such a burst of flavorful crunch to the soup. Along with a drizzle of olive oil, the dukkah adds interest to the elegance of this meal. You’ll have extra dukkah after you’ve finished the soup, which you can use on salads, eggs, vegetables, pasta and I’ve even put it on a bowl of curry and really enjoyed it. Plus, you’ll impress your friends by knowing what dukkah is! “It’s all the rage”, you’ll say.

Hello! All photos and content are copyright protected. Please do not use our photos without prior written permission. If you’ve made this recipe and would like to share it with your friends, please link back to Cauliflower Cheddar Soup with Hazelnut Dukkah on Blue Jean Chef. Thank you!